What are some of the principles guiding an artist’s hand when changing the shape of an image?

Most artists commence work on an image with a broad idea of what the outcome of their labour will look like even if the specifics of the image are hazy. Going further, most artists also allow for evolutionary change when fresh creative possibilities emerge during the execution process. Mindful that change is an almost inevitable consequence of creative invention, some changes may lead to pictorial dismantling involving radical cropping of a composition. Such alterations are usually not undertaken lightly and the following discussion offers insights into three key principles involved in aesthetic considerations when changing the format shape of an image:

To explain the use of these three principles, I will explore the cropping of Fred Williams’ etching, Coal Delivery, and Sir Francis Seymour Haden’s division of his original single printing plate image into the two print fragments: The Two Asses and . Clearly the following thoughts are my own and they are not those of the artists, but the driving issue is not really about these prints and the artists’ motivations but rather how the three principles can play a role in the decisive act of reshaping images.

Regarding the first principle—cropping an image so that its shape is appropriate for the projected meaning—Williams’ first state of the etching, Coal Delivery (shown below) reveals the original composition that prompted Williams’ decision to cut the plate. In this first state, the artist’s high viewpoint on two delivery workers captures the spirit of their everyday task. The elevated view with its resultant spatial foreshortening on the figures (see diagram below) draws attention to the sack carried on the shoulder of the foreground figure while the weight of this sack is suggested by the balance of the figure’s forward lean and outstretched arm. All this pictorial information expressing a fleeting moment is captured by Williams’ freely laid notational strokes, but I can see why Williams chose to reshape the composition even though it has all the essential components of the image in its final state: the background, as a broad field of virtually two-dimensional space, is distracting to the foreshortened viewpoint and the balanced movement of the foreground figure. In the final state of this print’s evolution, the top of the print is lowered and the left side is reduced (see diagram further below) to remove the distracting details and to focus attention on the figures. In short, William’s reduction in the image in the last state makes the point of the print much clearer—a brief moment of observed everyday reality in 1950’s .

Regarding the second principle—cropping the featured subjects on a Golden Section —this principle is all about finding the aesthetic point (i.e. the “sweet” spot) along the length of a subject, or even a single line, where the artist’s intuition “knows” is the ideal point for cutting a subject. In the earlier post “Jacque & Legros: Human Scale” this aesthetic point in a line is shown as the Golden Section point. Rather than dwell further on the significance of this proportional division in a line (remembering that there are two of these points in any line) I will move the discussion to two places in a subject where cropping should be avoided—or carefully considered.

The first of these places to be avoided are those where the subject can bend or where the subject changes its form or essential qualities. If the subject is a person, then the places where a figure can bend are, of course, the joints while the places on the figure where its form or essential qualities change are places like the hair line, the lip line and the cuticle line. In an image of a semi-trailer, or other articulated vehicles, the place to avoid cutting will be at the pivoting joint. In trees it will be the junction where a trunk becomes a limb and the limb become a twig. The simple reason why these places are problematic is that if the subject is cropped at one of these places then a viewer’s eye will be drawn to gaze at the break and diverted away from the critical projected meanings. For instance, consider how the eye is fixated on the bottom edge of Williams’ print when the foreground figure is cut on the ankle (see image below). Interestingly, if an artist wishes to make a figure appear hurt or dead in a war scene then use of cropping at points of articulation may be a useful device (see, for example, Théodore Géricault’s Mameluke Defending a Wounded Trumpeter
[http://nga.gov.au/FirstImpressions/details/50061.cfm]).


The second of these places to avoid featuring on a cropped edge is the centre of a portrayed subject. For instance, if Williams’ print were to be cropped along the figure’s groin (see below). Once again, the centre of a subject is fascinating to the eye and thus may divert a viewer’s attention away from the projected meaning of the image.


Regarding the third principle—cropping an image to achieve an aesthetic balance (based on the Golden Section proportions) between areas of drawing and areas left blank—this principle is all about artists employing their intuitive sense of what looks balanced. Like a traditional Japanese sand garden, where a harmonious balance is achieved by broad areas of raked sand and the psychological weight of a craggy rock, a similar balance is sought between the psychologically arresting strength of certain clusters of line and those areas (often blank) where visual demands are not placed on the eye. Achieving this balance can be rationalised by imagining that the balance would be perfect if all the black lines were dragged together (as if by some form of magnetism) and the amount of black in the image, in proportion to the amount of white paper, approximated the Golden ratio (see diagram below).


Williams’ reshaping of this etching and the changes he then made to its composition, such as the added tone to the foreground figure’s trousers and strengthening of vertical and horizontal lines framing this figure, is fully understandable in terms of refining the focus of the image. Not all decisions however, are so clear and straight forward. Sir Seymour Haden’s prints, The Two Asses and (shown below), are good examples of when the process of cropping an image has a disappointing outcome.

Fortunately I do not have to make this judgement from a personal standpoint as Haden has inscribed this evaluation onto the plate of The Two Assess for all to read (see detail below):
“This plate is a part of the square one wh [which?] follows it. Both were drawn under the mordant and afterwards cut. The balance wd [would?] have been better preserved if the division had not been made, and if this white space had been filled in with strong work as intended. S.H.”


Perhaps even more revealing about Haden’s view of The Two Asses is an insight by the printer of this etching, Frederick Goulding: “Mr. Seymour Haden [Jr.] tells me that later in his life his father was in the habit of presenting impressions of this plate to engaged couples” (Schneiderman, Richard 1983, A Catalogue Raisonne of the Prints of Sir Francis Seymour Haden, Robin Garton, Wiltshire, p. 129). Clearly Haden liked to share his mistakes as a warning for others.

Unfortunately there is no extant print of the original image before the printing plate was cut. Nevertheless, the digitally abutment of the two prints shown below gives an idea of Haden’s dilemma about the “white space” in the foreground of The Two Asses. From my reading of the abutted images, this lower-left space may need to be “filled in with strong work,” but the diagonal line of shrubbery bordering it adds to the serpentine twist of the river while at the same time focuses attention on the two asses acting as a fulcrum point of balance for the composition


Despite Haden’s reservations about his cropping of the printing plate, the line of division does address the three principles that artists usually consider (even if intuitively). Regarding the first principle, the division line enables both prints to be read as independent images with their own projected meanings. In my reading, The Two Asses invite contemplation about the relationship between the two animals and, in turn, their relationship with the surrounding landscape; Dundrum River projects a sinister mood arising in part by the dark recesses between the distant trees and from contrast between the mechanically horizontal lines of the sky against the organically curly lines of the foliage. Regarding the second principle, the line of division is a superb example of cutting the original rectangle at its golden section. Regarding the third principle, if the pattern of lights and darks were extracted in a conceptual way (see diagram below), then the proportion of drawn areas (the darks) compared to the unmarked areas (the lights) would be close to the Golden ratio. In short, both Haden and Williams had fine aesthetic eyes when they chose to crop their images.

I received a welcome note from the print dealers, Barham Money Fine Art (http://www.barhammoneyfineart.co.uk/), regarding Haden’s etching The Two Asses. They have a rare first state signed copy of the print before the addition of Haden’s inscription lamenting the barren foreground (see below). After looking at the plate in this untouched state Haden’s conundrum about finding a way forward is clear. 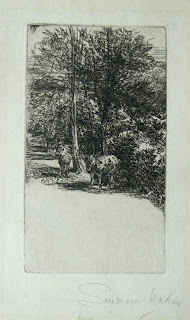