An Evolution in Representation (Part Three): Chuck Close and Brown

In the first instalment of this four-part survey focussed on the evolution of key approaches adopted by artists to portray their vision of reality, I mentioned two ducks—George and Mildred—that I feed during my morning walks. I have decided to return to these ducks for this third instalment and use them as illustrations of the perceptual phenomenon observed when viewing them through a single eye or the lens of a camera. The ramifications of this type of vision, appropriately termed monocular vision, is significant, as the representation of reality resulting from a single eye/lens view underpins most of today’s commercial photographic images and the artworks of artists who use photographs as a resource, such as Chuck Close (see clip below).

Essentially the effect of looking through a single lens or eye is that a plane parallel to the frame-of-view (i.e. the eye or camera lens) may be in focus but all features seen in the front of this plane and behind it are out-of-focus. This phenomenon is different to the effect of looking through two eyes in that vision registered through two eyes (i.e. binocular vision, discussed in the previous post) creates a single point of focus with focal clarity diminishing in 360 degrees away from this point (technically termed the point of fixation).

To demonstrate the pictorial effect of monocular vision, I took a photograph of George and Mildred and adjusted the focus in Photoshop (see below) so that the head of the duck in the foreground—hopefully it is a male duck as this is the one that I have named “George”—is in focus, while his mate—Mildred—in the background is rendered out-of-focus.

In the next digitally modified photograph (shown below) I have moved the focus onto George’s feet. Mindful that with monocular vision the focus is on a whole plane parallel to the eye/lens, this means that all featured subject matter that is parallel with George’s feet and the horizontal edge of the photograph will also be in-focus. Consequently, the pebbles to the right and left of his feet are also portrayed with focal clarity. Importantly, all the subject matter in front of this in-focus plane featuring George’s feet and pebbles are shown progressively as out-of-focus.

The third digitally modified photograph (shown below) has the focal plane shifted to the demure Mildred positioned behind George. Again, all portrayed subject matter on the same focal plane as Mildred is in focus while behind and in front of her focal clarity is gradually lost.

One may assume that a photograph like that of George and Mildred is a genuine pictorial capture of a split-second moment in time. Of course, the changing depth of field in a photograph with its capture of monocular vision cannot be a true representation of what is perceived for those who see the world through two eyes. Interestingly, however, the idea that each eye independently reads an image and that the brain then synthesises the two separate views into a single vision—binocular vision—is the core principle behind the stereoscopic images called anaglyphs; such as the digitally altered photograph of the ducks and the illustrations for the DC comics shown below.

Initially developed by Wilhelm Rollmann in 1952, the processes involved in the creation of an anaglyph has evolved over the years (see http://en.wikipedia.org/wiki/Anaglyph_3D for a listing of the variants and most recent advances). A fundamental approach to creating anaglyphs involves the overlaid juxtaposition of two slightly variant images (usually a red and a cyan image) created for each eye so that the binocular perception of two eyes filtered through different coloured lens (usually a red lens for the left eye and cyan for the right) synthesises the two viewpoints into a single coherent three-dimensional image.


With two eyes open and without the help of specialised glasses artists can approximate the effect of monocular vision. This is demonstrated very clearly by many of the images of Chuck Close. Beyond referencing the phenomenon of a single plane of focus in photography, artists can also use the effect of monocular vision to help project meaning and sustain a viewer's interest. For instance, in my diptych (i.e. two panel) ink drawing of mangroves shown below, the focus is on two separate clusters of leaves that are on the same spatial plane: one of these clusters is featured at centre of the the left panel and the other is shown on the right panel towards its right side (see details below). By design, this pair of leaf clusters acts as a dual design element spanning and pictorially connecting both panels of the diptych. I also wished them to be seen as points of interest embodying in miniature the sparkling effects that I experienced when being in mangroves. In short, my use of monocular vision in this drawing is an aid to composition and as a way to highlight the critical experience that I wished to express. 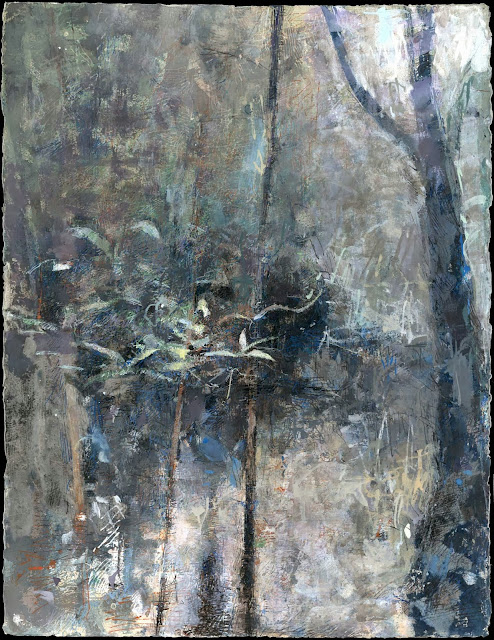 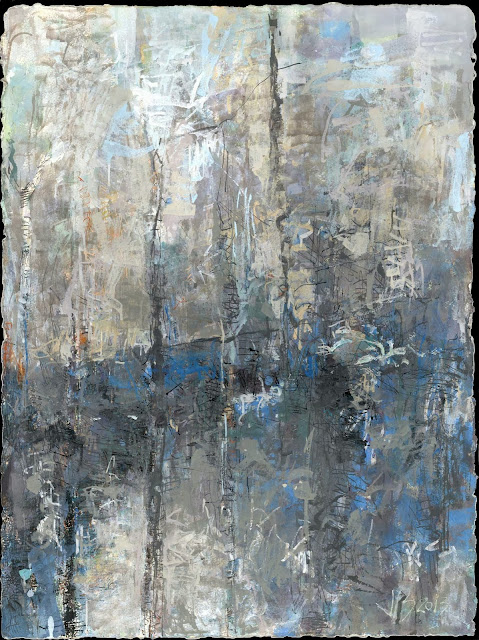 In the next post I will move the discussion of artists' approaches to portraying their vision to the fascinating field of gestalt theory.
Posted by Dr (Gordon) James Brown at 23:29 9 comments: