Engraving from the workshop of Hendrik Goltzius, “The Daughters of Cecrops Opening the Casket Entrusted to Them by Minerva”, 1590 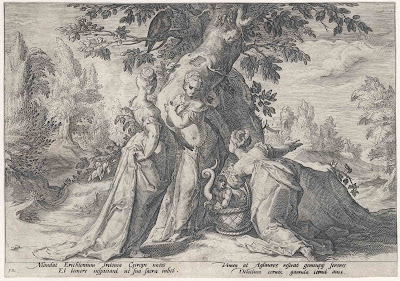 “The Daughters of Cecrops Opening the Casket Entrusted to Them by Minerva”, 1590, plate twelve of fifty-two plates, illustration to Ovid’s (43 BC–17/18 AD) “Metamorphoses Book I”, published by Hendrik Goltzius in Haarlem. In the second state (signified by the additional number “32” at lower right corner) the print was published by Claes Jansz. Visscher (1587–1652) and later by Hendrik Bosch in 1728 (see Rijksmuseum no. BI-1892-3357-33).

The Rijksmuseum offers the following description of this print:
(transl.) “Imagination of the first story that the crow Cornix tells the white raven Corvus. Cornix sees from a tree that the three Cecrops daughters open a woven basket entrusted to them by Minverva without being allowed to view the contents. In the basket Erichthonius, a baby with a snake's tail. This print is part of a series of 52 prints that depict stories from Ovid ‘Metamorphoses’. This series is divided into three numbered series: two of 20 prints and one of 12 prints. This print belongs to the second series.”
(http://hdl.handle.net/10934/RM0001.COLLECT.380087)

See also the description of this print in its second state by the British Museum:
http://www.britishmuseum.org/research/collection_online/collection_object_details.aspx?objectId=3165200&partId=1&searchText=Goltzius+Daughters+of+Cecrops&page=1

Condition: well-printed slightly silvery impression trimmed close to the image borderline and backed with a support sheet of archival (millennium quality) washi paper. There are small areas of loss restored with infilled watercolour (e.g. on the trunk of the tree immediately below the forking branches), otherwise the print is in good condition (i.e. there are no stains or foxing).

I am selling this graphically strong and important allegorical print from the workshop of Goltzius for a total cost of AU$266 (currently US$193.91/EUR166.25/GBP150.54 at the time of posting this print) including postage and handling to anywhere in the world.
If you are interested in purchasing this exceptionally beautiful engraving exemplifying the period style termed Mannerism, please contact me (oz_jim@printsandprinciples.com) and I will send you a PayPal invoice to make the payment easy. 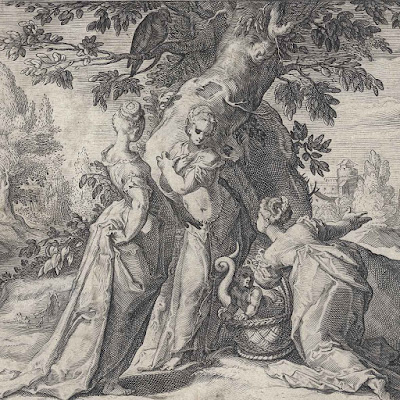 For me this has been one of those allegorical scenes that seemed to hint at bigger meanings but fell short; until I discovered a missing clue tonight! Before I reveal this missing element, however, let me start with what I understand to be portrayed in this scene.

These three young ladies are the daughters of the mythical king of Athens, Cecrops—famous for instituting the idea of marriage and lots of other things. These sisters were given the responsibility by the goddess Minerva to guard the basket shown here, but not to open it. Of course, the need to know what was inside was too strong and the young lady on the right, Aglaurus (the perfect name for my next cat!), opened the basket. What peeped out of the basket is the cute serpent-tailed child, Erichthonios. I will ignore for the moment that the crow in the tree is Minerva’s spy who will report the sisters’ shameful breach of faith in opening the basket. Moreover, I will only briefly add that the sisters are so repelled by the discovery of little Erichthonios that they hurl themselves off the Acropolis to their deaths. Instead I need to focus on the element in this image that was (until tonight) a mystery for me: the meaning behind Aglaurus’ gesture towards the distance.

What I discovered this evening is that this composition is incomplete. If one looks at the engraving of virtually the same composition originally designed by Goltzius but copied in reverse by Crispijn de Passe the Elder (1564–1637) as an illustration to the later edition of Ovid’s “Metamorphoses Book I” (see http://hdl.handle.net/10934/RM0001.COLLECT.322205) what Aglaurus is gesturing towards now makes sense: the later composition shows Aglaurus pointing to Vulcan’s attempted rape of Minerva wherein he inadvertently fertilizes Mother Earth instead of Minerva leading to Mother Earth giving birth to little Erichthonius. In short, gestures made by errant daughters should have meanings and here they do! 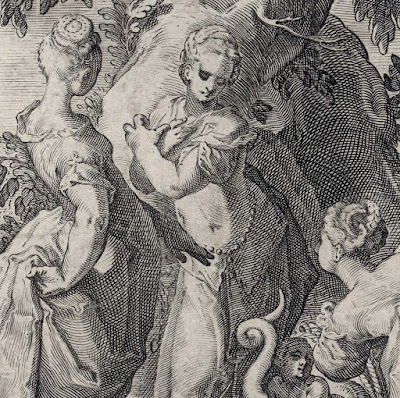 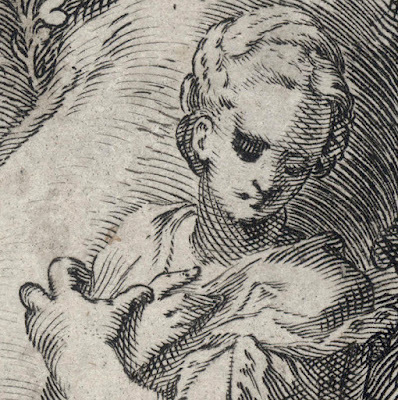 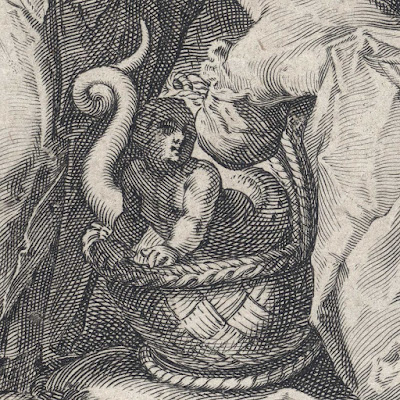 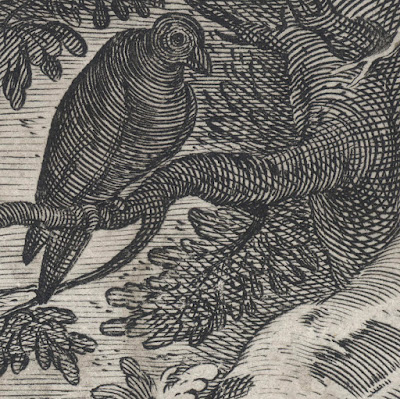 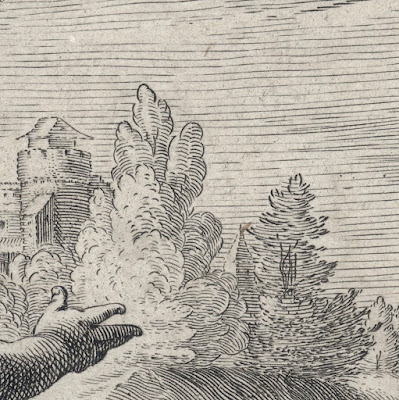 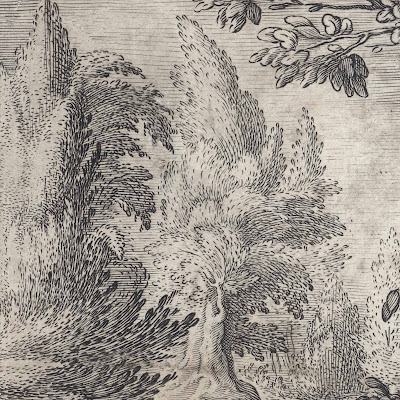 Posted by printsandprinciples at 05:59