What are the key approaches to drawing?

Without too many apologies for speaking broadly, I wish to propose that there are only two fundamental approaches to drawing: the haptic and the visual. The haptic approach involves an artist drawing the chosen subject as if “feeling” its contours and spatial volume in a sensory way. For instance, if the subject were a chair, the artist would seemingly—perhaps literally—stroke the drawing support with the pen or pencil as if stroking the chair’s contours until an image of the chair became apparent. This attitude of discovering form by sensory exploration is expressed well by Michelangelo’s often quoted assertion:” I saw the angel in the marble and carved until I set him free” (arguably from a letter from Michelangelo to Benedetto Varchi). By contrast, the visual approach is a much more analytical and calculated process of representing a subject using pictorial conventions, sight-size measuring and applying the most appropriate marks to mimic the subject’s pictorial attributes. For instance, in using this approach the artist would draw the chair by using the rules of perspective and employ marks to replicate the textures and patterns of light and shade on the chair.  To illustrate the difference of these two approaches and the advantages of each, the following discussion will focus on the way that Auguste Rodin (1840–1917) employs the haptic approach in portraiture by comparison to the visual approach of Bernard-Romain Julien (1802–71).

Like most sculptors engaged with working in a three-dimensional medium such as clay, plaster and bronze, Rodin’s practice as a draughtsman is to use each line as if it were floating in space. Moreover, the placement of each line in this illusion of space is so clear its position with regard to the other lines in a drawing can be determined with a fair degree of certainty. In his portrait of Victor Hugo (shown below) for example the lines portraying the great writer’s beard (see the detail further below) are arranged so that the hairs closest to us are minimally longer and have more graphic energy (i.e. expressive “life”) than the lines describing the further away aspects of his beard. From a personal standpoint, these lines are more than descriptive marks representing the beard. They embody the material substance of the beard as a three-dimensional mass leading back to his face in a flurry of rhythms like water making its way through rapids.

Rodin’s treatment of the silhouette outline of Hugo’s forehead reveals a key element of the haptic approach: a subject’s form is constructed out of the contours of the subject’s features rather than through observed effects of light and shade on the features. For example, the bump on Hugo’s noble brow (see detail below) is not delineated as a simple convexity in an unbroken silhouette outline. Instead the bump is portrayed as a conceptually “felt” excrescency and, as a consequence, the line work contouring the bump is then fitted into the matrix of other “felt” contours that ultimately shape the silhouette outline of Hugo’s head. In short, the outline is constructed from the head’s internal features rather than an observed line of demarcation between the subject and the immediate background.


One outcome of working with the haptic approach is that a drawing of a subject executed this way must ultimately be a personal and subjective portrayal. Of course, this is not usually a problem as part of the mantra of most artists is to showcase a personal vision. When a personal perception is not required, as for example in presenting an objective viewpoint for technical illustration, the visual approach of presenting a subject from the standpoint of what can be observed becomes important. The teaching of drawing and illustration is built around this approach as it gives opportunity for all the drawing techniques and principles gathered through the centuries to be channelled into a best practice model for portraying a subject. One of the instrumental artists engaged in this academic pursuit during the nineteenth century is Bernard-Romain Julien.

Julien’s approach to drawing is easily seen in his exercise templates for students to copy. In the selection of lithographs shown below the fine art academy student is invited to use the initial outline of the figure on the left of each plate and to follow the tonal distribution of the figure fully rendered in tone on the right. During the nineteenth century, instructional plates like these were widely available and they helped to train the student’s eye to see clearly and to instil care in the modelling of a subject’s form using very controlled shading techniques. 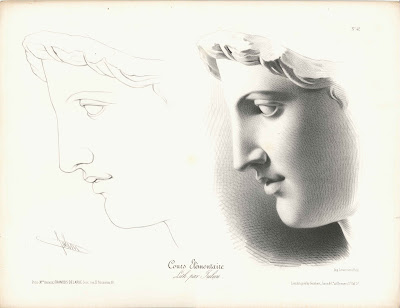 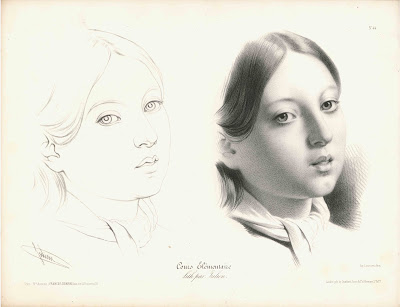 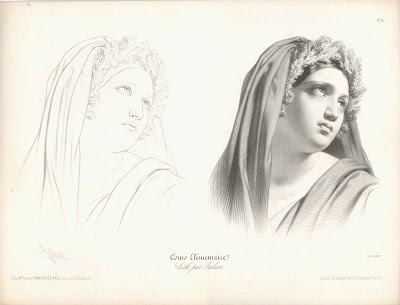 In the two prints below Julien’s deep admiration of a classical past is very evident. Not only is the choice of a subject designed to appeal to a taste at that time for notions of beauty aligned to the antique but the style of rendering is also designed to impart cool objectivity despite the use of dramatic lighting and the vignette format. 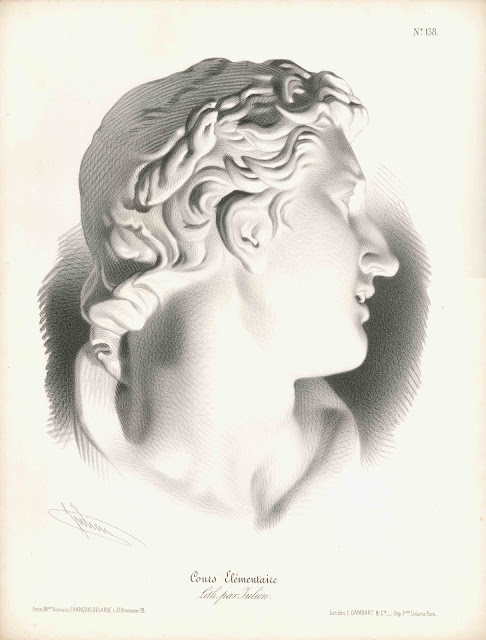 Julien’s infinite care in rendering the transitions of tone on a subject also extends to how he models the contours of each form with line. In Etude d’apres E. Deveria (shown below), for instance, the cross-hatching of lines is so consciously controlled that the precision of alignment within each set of lines makes the form of the subject a clear representation of concrete reality.

On close comparison with the line work of Rodin, however, there is a difference in the handling of contours. In Julien’s print the line work can be described as an approximation of a broad flow of the subject’s contours but this flow is one based on observation rather than sensory exploration. Herein is the essential difference in the two approaches.