Over the course of previous three posts the focus has been on different approaches that artists employ when attempting to portray reality. What has been left to this fourth and final discussion in the current series is arguably the most interesting approach of all: the use of visual cues for visual communication where no part of an image is more important than the whole. In short, the following discussion will address how Gestalt psychology has been adapted by artists—often unknowingly—and applied in the representation of reality. More specifically, I aim to explain how artists have employed two laws of Gestalt theory to help viewers to interpret visual information:

Regarding the “law of figure and ground,” Edgar Rubin (1886–1952), who is probably most famous for his face-and-vase illusion
(see http://en.wikipedia.org/wiki/Figure%E2%80%93ground_(perception) [viewed 11 October 2013]), proposes that there are four attributes in an image which help a viewer to distinguish the figure (i.e. the essential subject) from the ground (i.e. the background)
(see http://www.preservearticles.com/201102023813/law-of-figure-ground-relationship-of-perceptual-organization.html [viewed 27 September 2013]). With a note of apology for my interpretative rewording of Rubin’s ideas, these may be outlined as:
1. the figure’s shape has a clear edge, whereas the shapes in the background are less defined;
2. the figure is laid on the top of a visual field of background features;
3. the figure is closer to the viewer than the background;
4. the figure’s shape has associations with tangible forms.
To explain the significance and importance of these attributes in practice, I wish to compare Cornelis Bega’s (1631/1632–64) etching, The Singer (shown below) with Hans Burgkmair’s (1473–1531) woodcut, The Battle of (shown further below).


In terms of Rubin’s first “rule”—viz. “the figure’s shape has a clear edge, whereas the shapes in the background are less defined”—Bega’s print is an ideal example. Bega not only separates the three primary figures he portrays from the background with an outline, but he also applies subtle differences in the treatment of each figure’s outline to suggest where the three figures stand in space. By this I mean that Bega represents the illusion of spatial depth by making the small boy in the foreground appear to be in front of the other figures through the use of a sharp outline, whereas the most distant figure (i.e. the man holding a sheet of paper while singing) is portrayed with a comparatively freely drawn outline (see details below).

Regarding Rubin’s second and third rules—viz. “the figure is laid on the top of a visual field of background features” and “the figure is closer to the viewer than the background”—both prints by Bega and Burgkmair demonstrate how the principle may be applied successfully. For example, both artists employ the principle of overlapping to establish the logic of which figure is in front of which and the relative distance between the various figures. Nevertheless, Burgkmair’s print has problematic areas, such as shown in the detail below featuring a cannon and a figure above it, where the principle of overlapping is not applied. In these areas the lack of overlapping results in spatial ambiguity where a viewer may be uncertain about the logic of relative distances between the cannon and the figure, and the figure and the rest of the battle scene.

Rubin’s fourth and final rule—viz. “the figure’s shape has associations with tangible forms”—is a sensible and straight forward rule that does not need too much clarification. After all, most perceptions are framed by past experiences—mindful that there are arguments as to whether our brains are pre-programmed, or evolved by experience, or perhaps a mixture of both. For instance, most viewers would perceive figures in both prints because they “know” what people look like. Moreover they can “read” meaning into how people move and the plethora of observed subtleties, such as body-language, acquired from personal experience. In the case of Bega's print, the plant depicted in front of the songster's legs (see detail below) is likely to be perceived as a plant with all the attributes of a plant simply by association of what plants look like and by the artistic convention of using loose line-work to represent the silhouette shape of plants.

Unlike the first law of Gestalt theory, the second law—the “law of closure”—relies more heavily upon the artist’s intuitive sense of what might be the minimum visual information required to convey meaning. For instance, if an artist wishes to represent a rectangle (see Figure A below), there may not be the need to show all sides of the rectangle. The artist could, for example, choose to only show the corners (see Figure B below) and let audience’s mind fill in the blank lines of the sides without literally inscribing them in the drawing. Alternatively, the artist could choose to show only the centres of the rectangle’s sides (see Figure C below) and leave the audience to imagine the blank corners as a reconstruction (i.e. in “the mind’s eye”). In short, the last two examples are illustrations of how an artist can supply a minimum of amount of visual information and rely on the “law of closure” to assist an audience to “fill in” the complete picture. 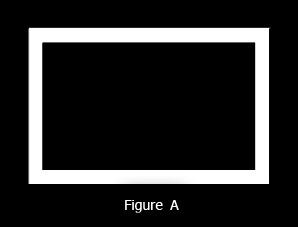 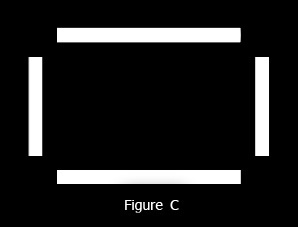 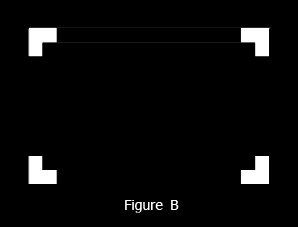 Shown below is a fine example of this law in an ink painting of a monkey in a tree by a Japanese artist with whom I am not familiar. This sensitive portrayal of a monkey relies entirely on the viewer being able to perceive connections between freely laid brushstrokes. For instance, in the detail shown further below, the artist has not drawn an outline of the monkey as a clearly defined shape hugging a tree limb. Instead the monkey’s form and how tightly it clutches the branch is suggested by the viewer’s eye seeing a visual bridge-like connection between two critical accents: the pointed brushstroke describing the tree branch above the monkey’s head and another pointed stroke at the monkey’s tail. Amongst many other visual prompts (e.g. the variation of pressure used to represent the monkey’s chin resting on the tree limb), these two marks are like bookends that carry a line of connections between them. 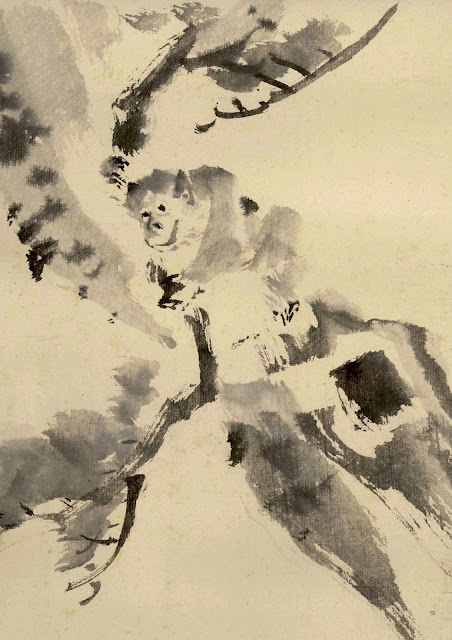 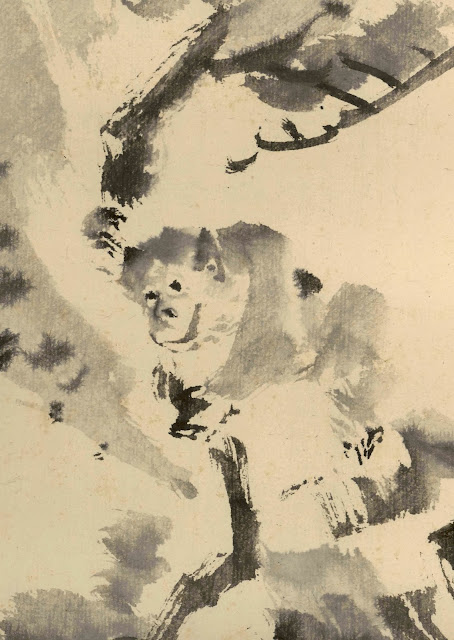 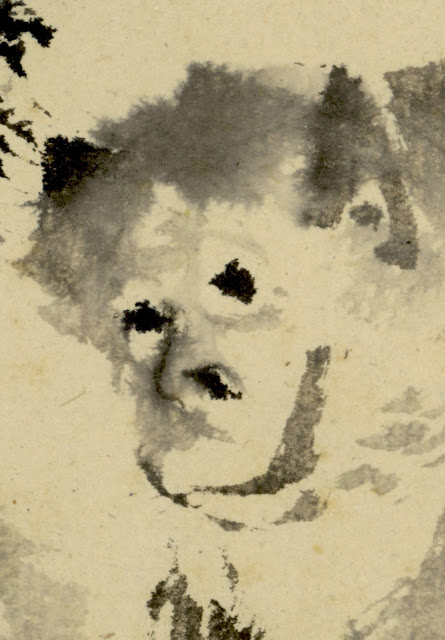 Creating the effect of closure through such a line of connections can be a lead to a formulaic approach to applying the second law, but there are meaningful ways to decide what should be shown and what should be omitted.

One approach to using this law is to think in terms of creating psychological democracy in an image. By this I mean, an artist should lessen (i.e. “play down”) the importance of what might be seen as psychologically arresting visual information and increase (i.e. “play up”) the importance of what may be seen as psychologically undemanding visual information. Most artists do this intuitively so that what they portray seems psychologically balanced. For instance, in my life-drawing classes where the focus is on nude models, I am often struck by the interest of many students in the psychologically undemanding areas of the figure—the neck, the waist, armpits and knees—rather than in the psychologically arresting areas—the face, hands, feet and genitals. The outcome of such a focus on incidental details, rather than portraying all the model’s features, gives the viewer’s mind scope to “fill in” the missing or thinly drawn areas so that the subject can be perceived as a coherent form.

An example of an artist displaying a psychologically balanced vision may be seen in Marino Marini’s (1901–80) etching Two Pomonas (shown below). In this image Marini renders a pair of figures with two different treatments. The less psychologically interesting features—the figures’ head-shapes, backs, elbows and knees—he renders with a single fine line, whereas more sexually and psychologically interesting features—breasts, genitals, hands, feet and faces—are blurred with cross-hatching. By intention, Marini gives the viewer sufficient visual information to see both figures despite not portraying in graphic detail the figures in their entirety. Beyond giving the viewer minimal information to complete the image mentally, this balance of the two treatments offers more. It allows the viewer to move beyond the pictorial reality of looking at two figures and to contemplate the image as a well-integrated composition. In short, this approach is about portraying an image as a cohesive whole rather than an image of parts. 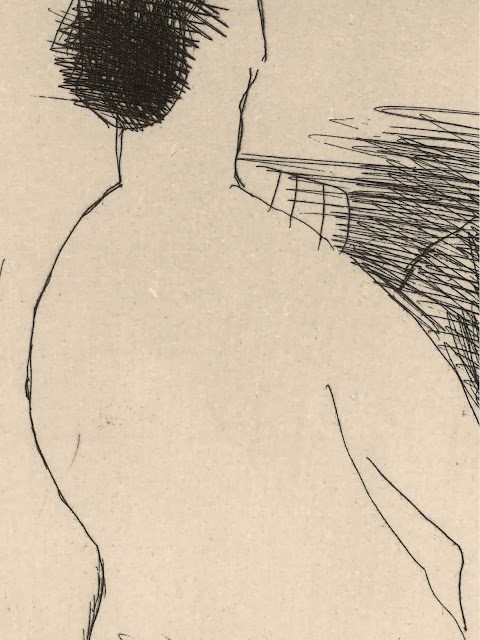 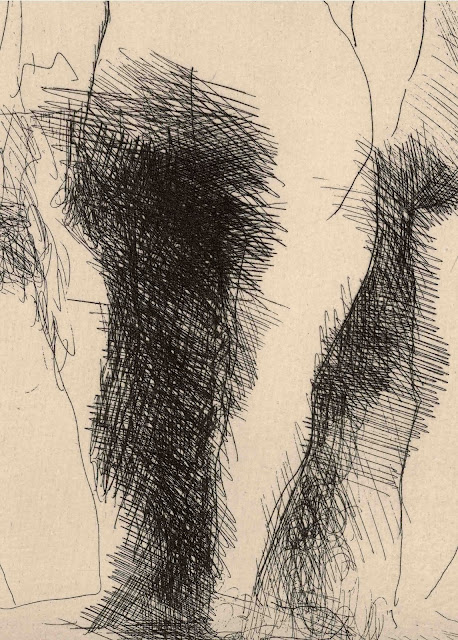 As an experiment (shown below), I have digitally modified Marini’s print with details of figures extracted from several of Hendrick Goltzius’ prints and drawings. My aim is to illustrate how the introduction of these intimate details—a face, breasts, buttocks and feet—can disrupt and visually fragment an image into parts, because such details are psychologically laden with personal meanings that, arguably, inhibit an instantaneous reading. Of course, not all viewers will agree and there is an argument that the proximity of the features may even assist with a viewer's perception of form. From my reading of this digital image, however, I find my eye and brain distracted by the intimate details. In truth, my experience is less about the artwork as a cohesive image and more about finding meaning for the added details.

An alternative way of employing the law of closure is shown in Kusumi Morikage’s (1620–80) ink painting of an egret (shown below) where the shape and form of the bird is expressed by the background. Here the tone of the background (i.e. the negative space) behind the bird is represented by an insightful use of line that portrays the bird’s physical form (i.e. positive space). For instance, to portray the Egret’s crown feathers Morikage has used a single fluid line with a hook at its top to present the silhouette shape of these feathers, their dazzling whiteness and, interestingly, their latent springiness (see details further below). 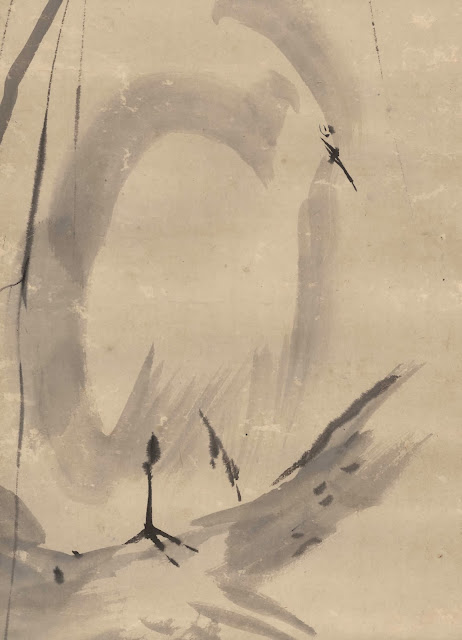 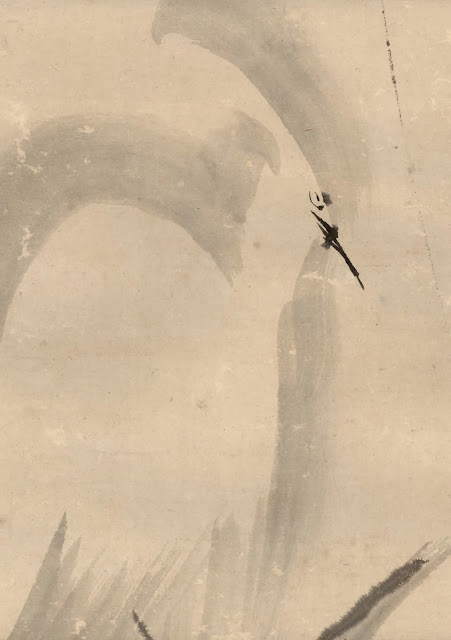 http://proj.ncku.edu.tw/research/articles/e/20101210/2.html [viewed 7 January 2014]) as “emergence” when a recognisable image is perceived from a collection of what may otherwise be viewed as disparate pictorial fragments. Perhaps the most famous illustration of this phenomenon is R C James’ image of a Dalmatian dog sniffing the ground (see
http://thecuriouspanther.files.wordpress.com/2012/02/gestalt1.jpg in
http://thecuriouspanther.wordpress.com/2012/02/29/gestaltism-a-theory-of-mindand-brain/ [viewed 7 January 2014]) and I have attempted to explore this type of reductive image in my digital experiments with a local stray cat in my garden (see below). Although an exact explanation as to why we are able to synthesise such information has not been advanced (beyond the theory that there are many causes/laws all working together) the effect remains that the brain is able to piece together an image as a whole from fragments if there are visual and psychological triggers for it to perceive forms.

Before ending this discussion I wish to propose that one of the best examples of our brain's flexibility to negotiate meaning from a mire of fragments is showcased in the art of autostereograms popularised in the Magic Eye books (see an example of an autostereogram at http://en.wikipedia.org/wiki/Autostereogram [viewed 7 January 2013]).
Posted by Dr (Gordon) James Brown at 03:58