Beyond the fundamentals of how to apply sight-size measuring devices to gauge a figure’s proportions, what are some of the more subtle principles guiding an artist’s hand when drawing a figure?

Sometimes the best way of explaining the solution to a problem is to begin by giving a practical example of it and then discuss how the problem may be rectified. Although this is a simple and a sensible strategy, in the visual arts such an approach is not always easy to apply as it means that an artist’s work needs to be critiqued in a public forum with the stigma that the artwork “is not right.” Clearly, not every artist would be happy to have their faults showcased publicly. Fortunately, my approach to drawing has always involved a serious dissection of shortfalls in my art practice and I receive a genuine pleasure when I discover ways of improving my work. With this spirit I have decided to use one of my life drawings, Reclining Nude with Outstretched Arms (shown below), as a way of explaining and illustrating weakness and to use drawings from the superb artist, Harry Carmean (1922–), to show how his use of key principles could improve my drawing.

Let me begin by briefly outlining my intention when executing Reclining Nude with Outstretched Arms. This drawing was part of an exhibition presented as a component of my Master’s degree (1990) focused on portraying the male nude in different contexts. At the time, my interest in this drawing was fairly straight forward: to use contour lines (i.e. strokes describing the form of a subject) to portray a figure without relying on the figure’s surroundings to give spatial depth.

With hindsight, however, I succumbed to the indulgence of many struggling artists: use of more visual devices than are really necessary. By this I mean that if my interest were to portray form through contour marks I should have stuck to that aim and I should not have introduced outlines (i.e. non-contour lines) to “muddy” the purity of my original purpose. Now that I have chastised myself there are many other issues beyond clarity of purpose that show weakness in rendering three-dimensional form and these I will address in the following discussion.

One of the notable shortfalls in my drawing lies with capturing the figure’s skeletal and muscle structures beneath the skin. For instance, compare Carmean’s (1922–) study of an arm (shown below) after one of my favourite draughtsmen, Adolph Menzel (1815–1905). In Carmean’s drawing the hand is represented as having a block-like form with a top plane—the palmar surface—and side planes. Carmean’s approach to drawing the hand and his vision of what lies beneath the skin is illustrated very well by the schematic sketch of a single finger displayed on the upper-right side of the sheet. Here, the highly stylised three bones of the finger are portrayed as simple rectangular blocks shaped into fingers by an outline. Note in particular how the shaping of the finger’s outline takes into account the subtle swelling of the finger bones at their joints without losing the broad view of the finger bones as simple blocks (i.e. Carmean keeps the “big view” rather than being distracted by an “intimate view” of superficial details like finger joints).

Admittedly the portrayed hands in my drawing are in a pronate position which is different to Carmean’s supinate view, but the shortfall in my drawing of hands remains the same: the hands’ block-like structures have not been visualised properly resulting puffy, sausage-like forms. In short, what is needed is Carmean’s blocking of the palm and fingers and this blocking would have given the hands a greater dimension of solidity. 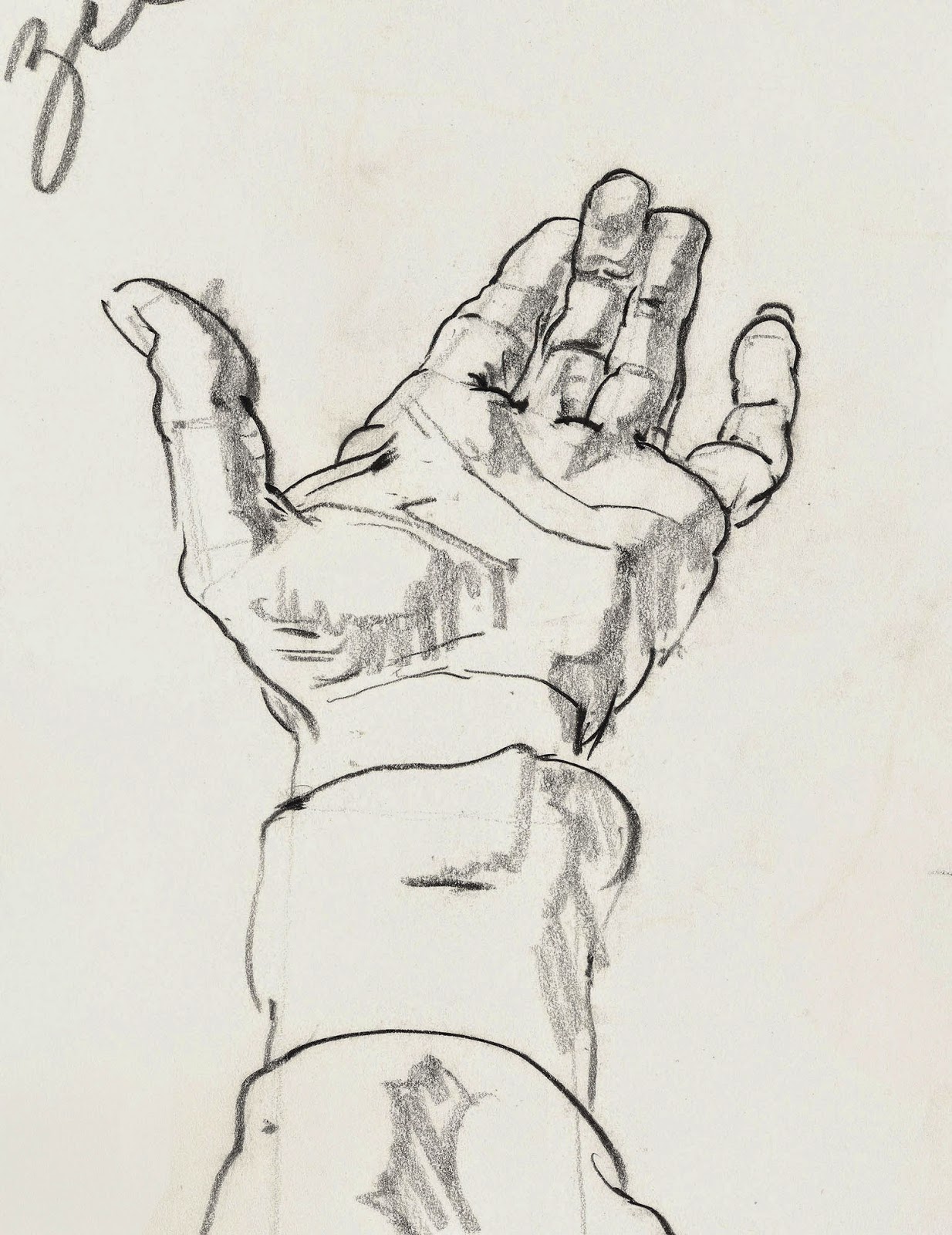 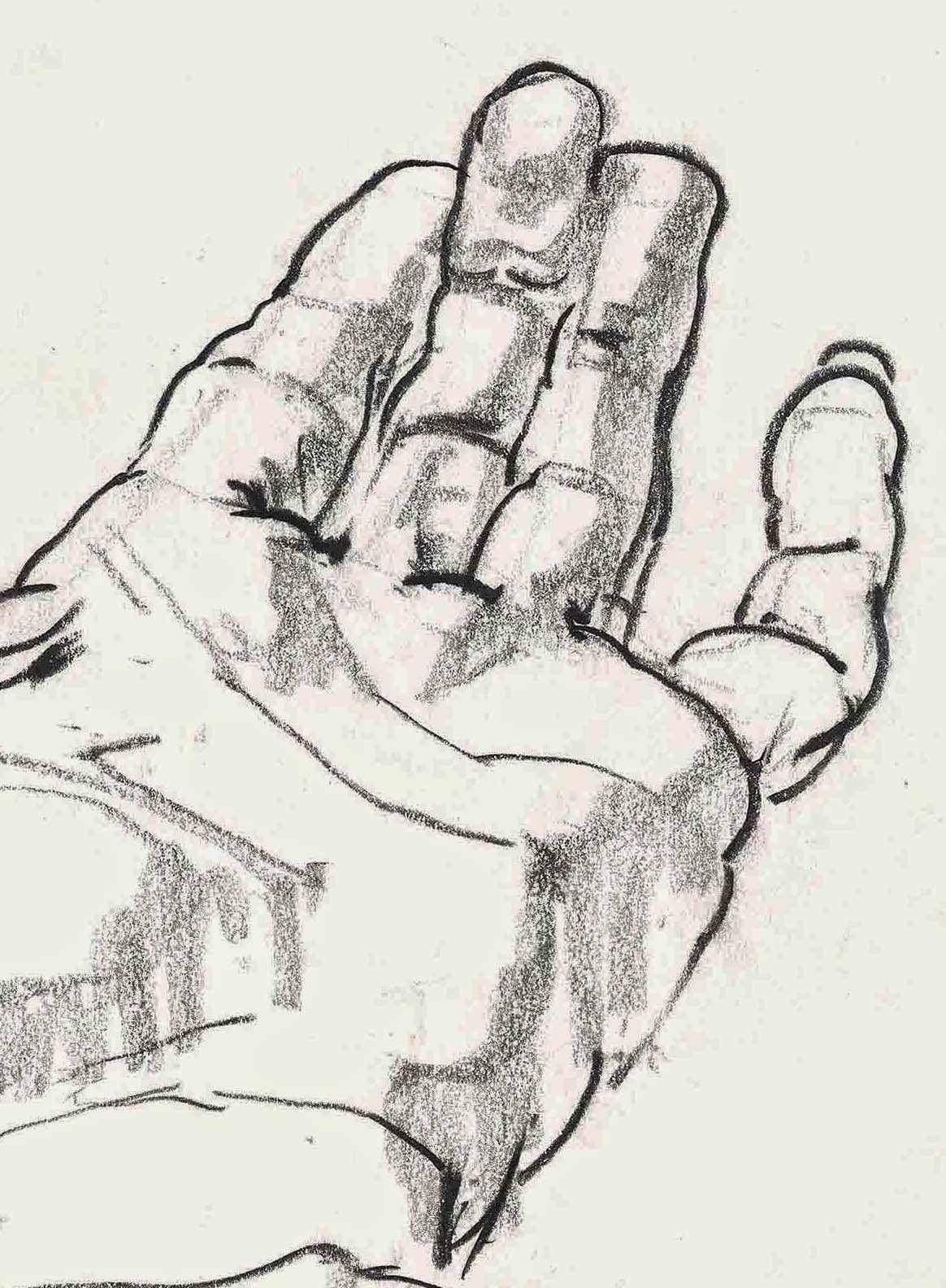 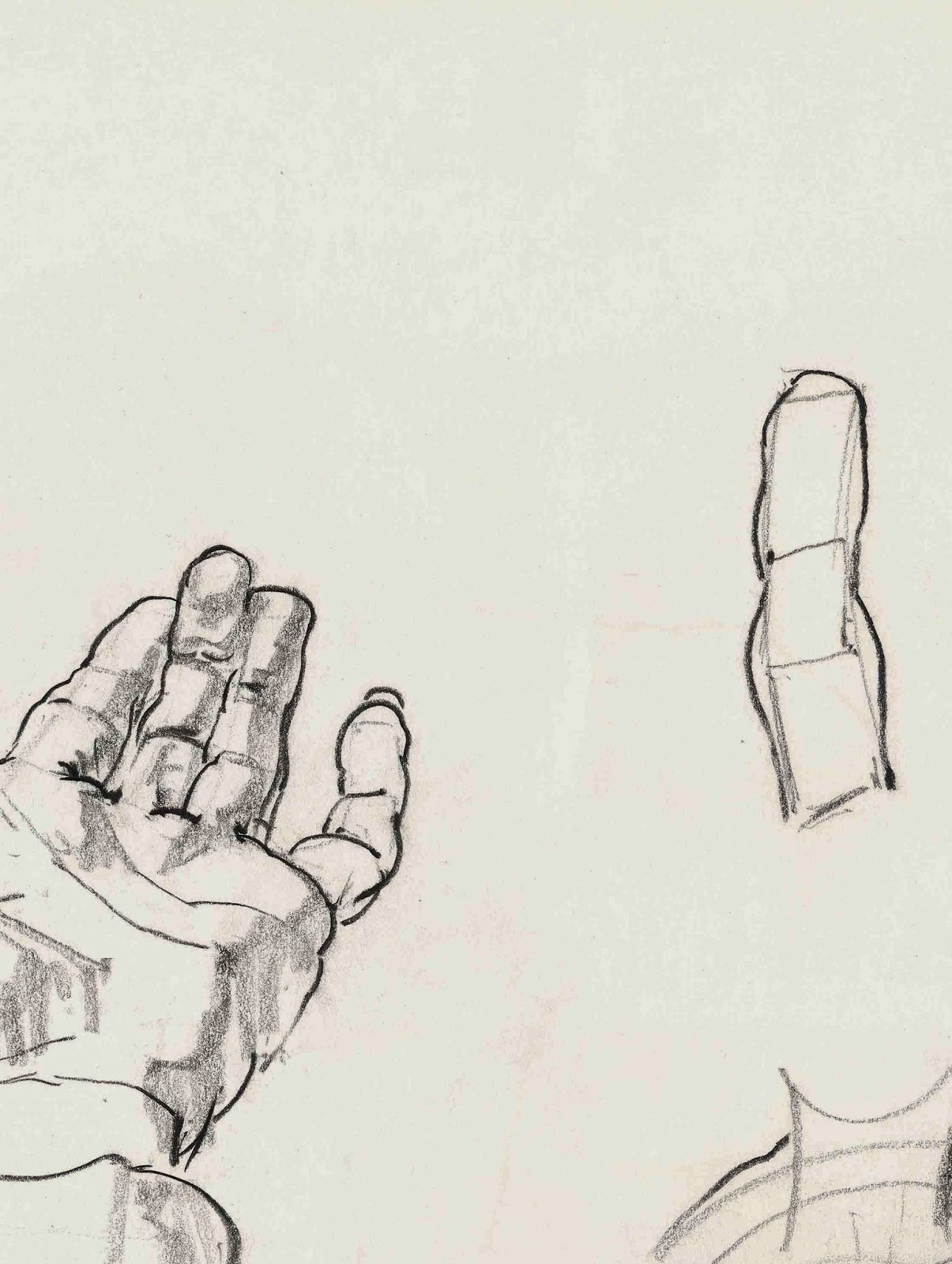 To help illustrate what I mean by the principle of “blocking,” the image shown below on the left is a detail from my drawing. Compare this original image to the digital version abutting it on the right where I have tentatively reshaped the sausage-like form of the fingers and palm with tones and marks suggesting a block-like hand structure. No doubt there are many highly skilled artists who would love to enhance my digital version even more and I welcome any contribution. 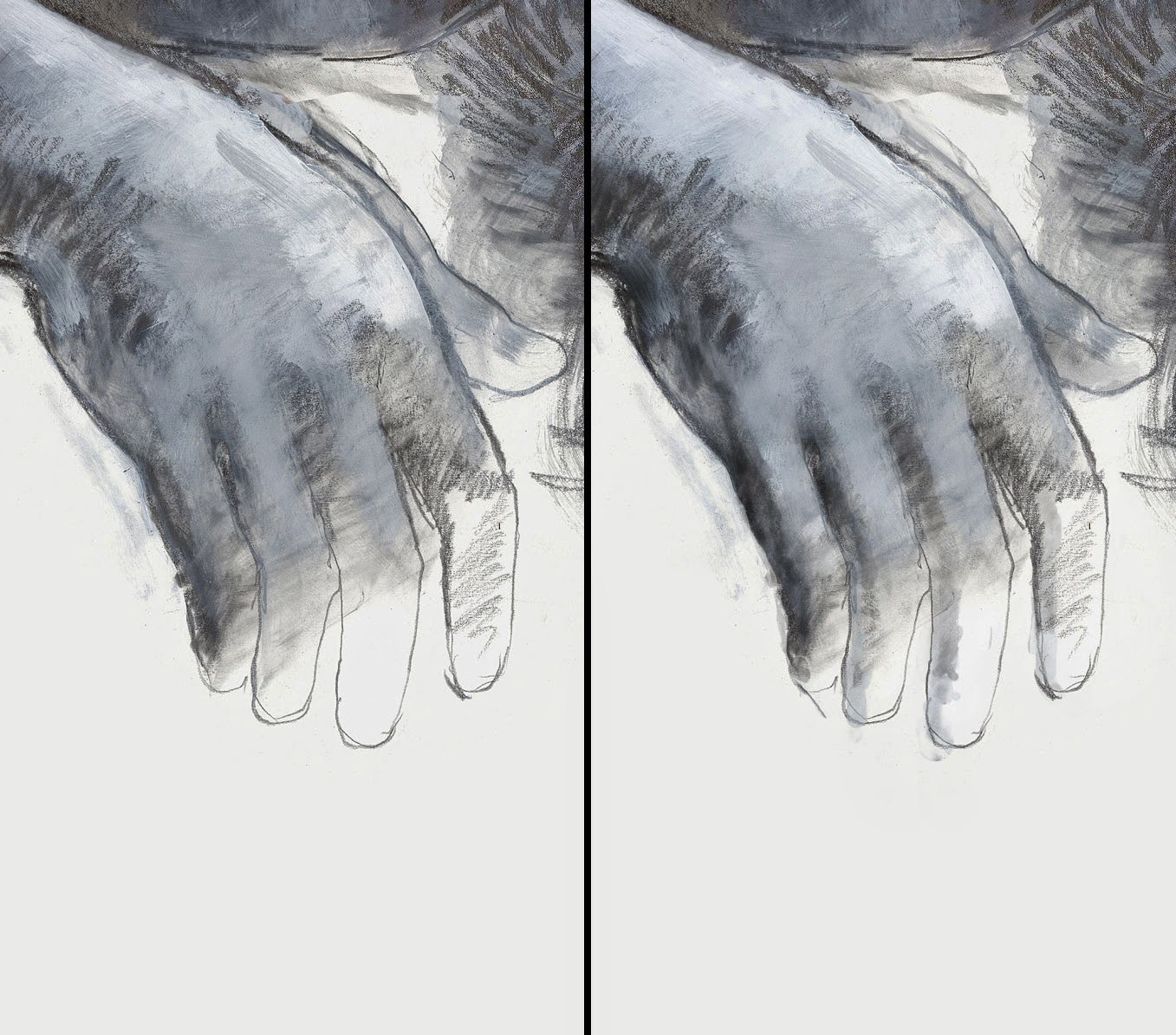 Sadly, after contemplating my digital exploration (shown above) I now see another shortcoming: I should have given greater emphasis to the directions of the skin folds at the knuckles. In short, the creases at the knuckles of the two smallest fingers should be angled to the small-finger-side of the hand and the crease separating the fingers on the thumb side should be angled to the thumb-side of the hand (see photo of two casts of hands below with red lines denoting the directions of the key creases). 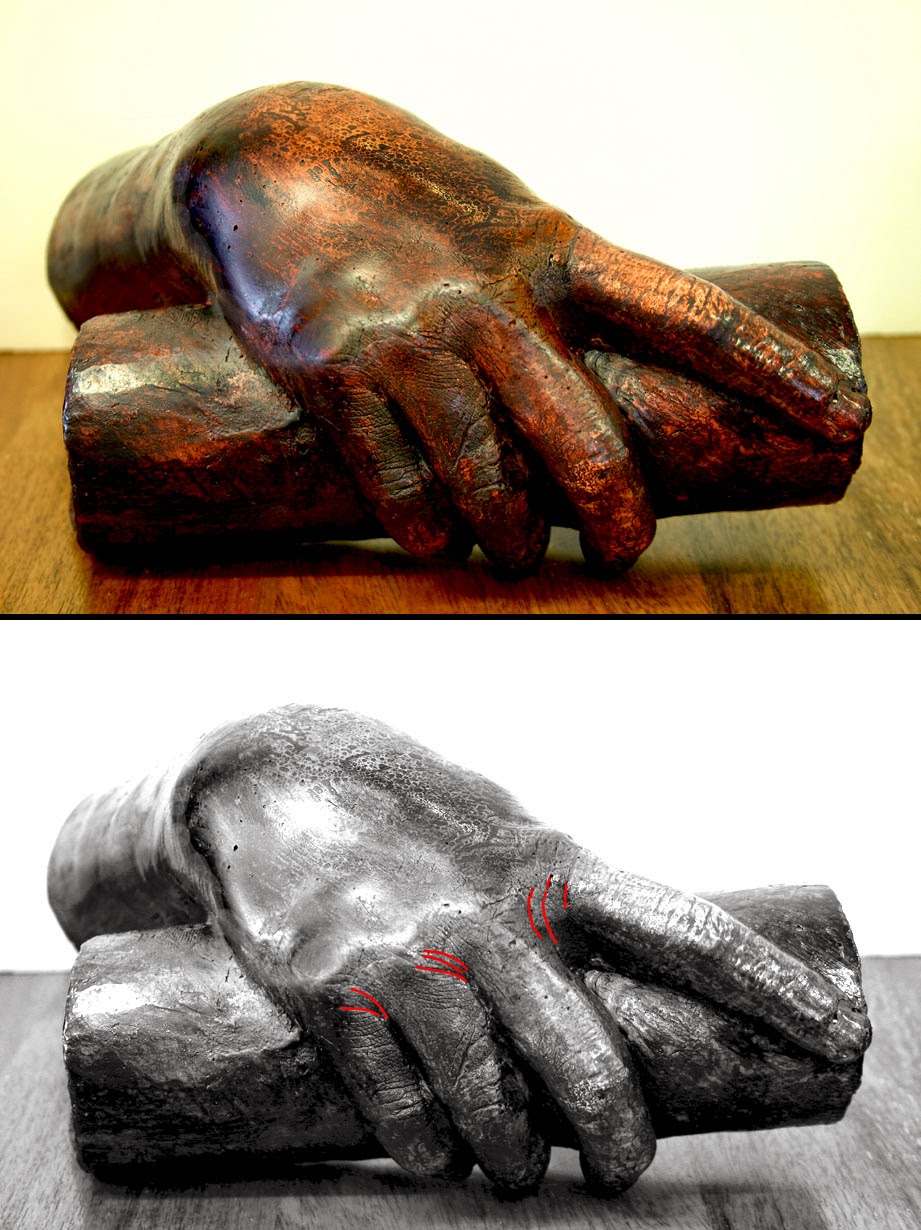 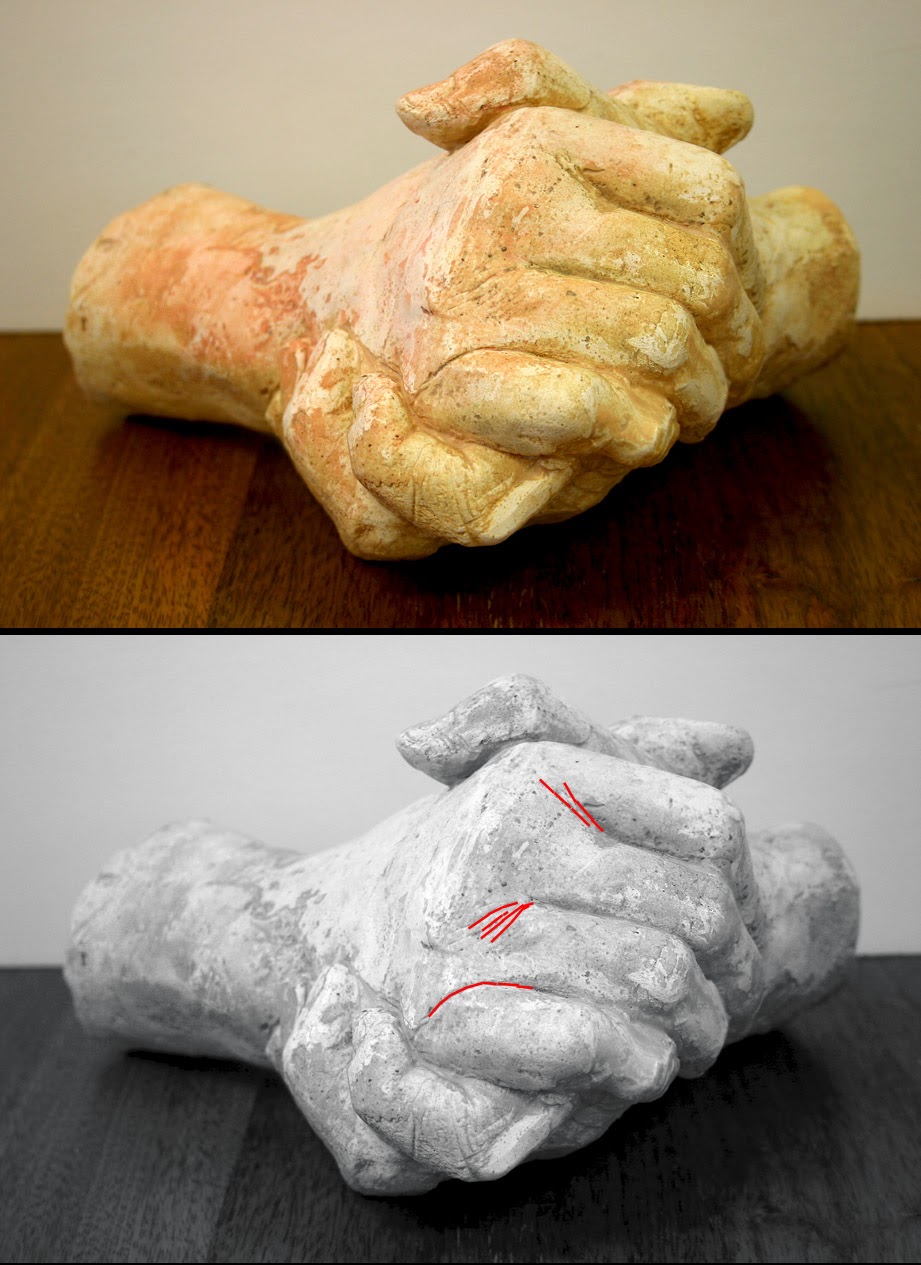 In an attempt to remedy the knuckle crease error I have amended the former digital image of the hand (shown on the left image below) with more digital changes (shown on the right image below). Hopefully, other interested artists will help refine the image still further but now I need to move on to the next principle resting heavily on my mind. 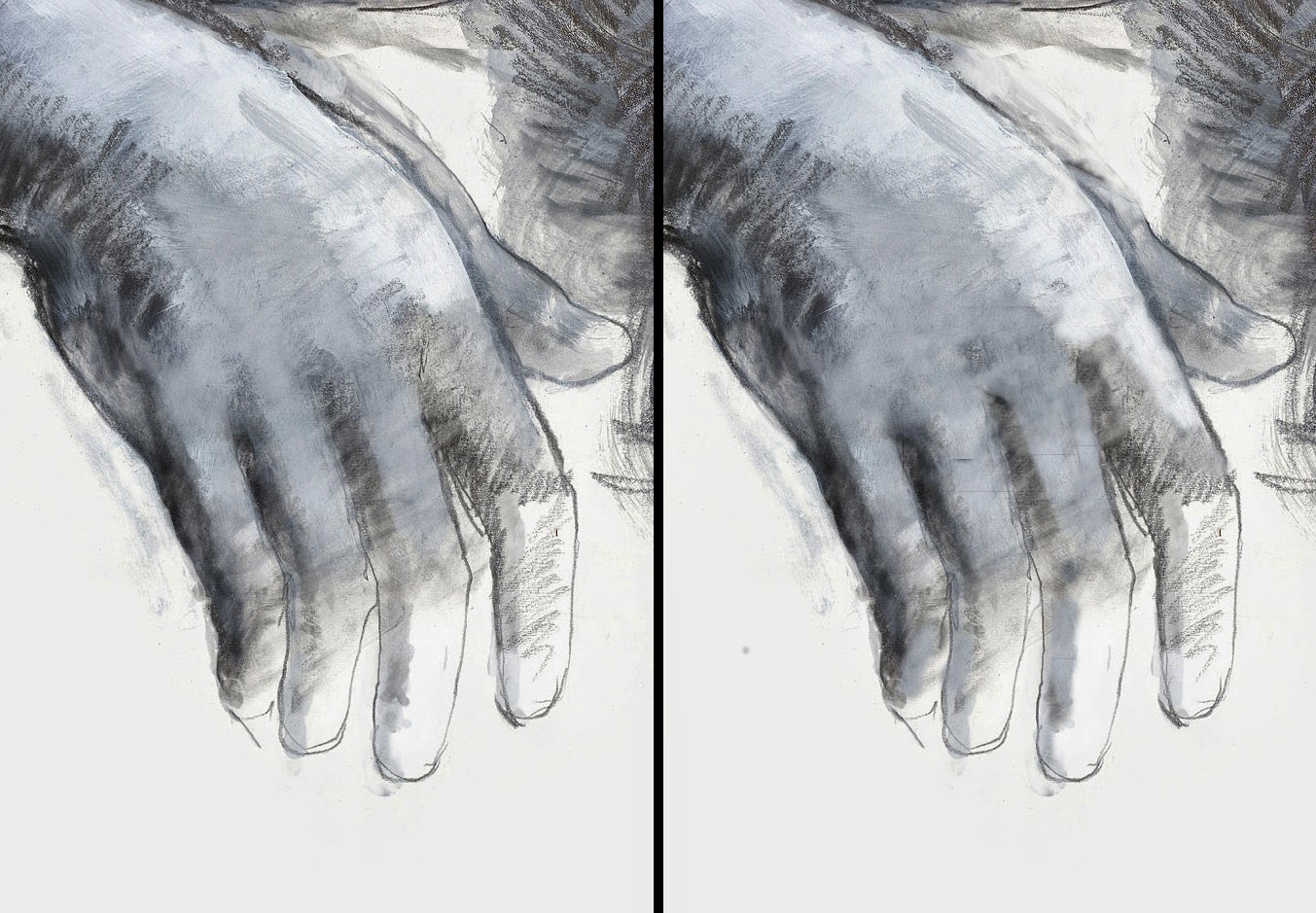 At the time I executed Reclining Nude with Outstretched Arms my artistic heroes/mentors were Mario Dubsky (1939–85) (see an example of his drawings at http://www.guyburch.co.uk/images/ArtWork/Mario%20Dubsky.htm [viewed 6 June 2014]) and Euan Uglow (1932–2000) (see an example of his paintings and drawings at  http://paintingperceptions.com/figure-painting/euan-uglow  [viewed 6 June 2014]). Both of these artists have visually arresting drawing styles and both exhibit subtlety of line phrasing (i.e. varying the tone, opacity and thickness of line within a stroke), but neither guided me to a way of representing how muscles and tendons are anchored to the bones. This is where my more recent “discovery” of Carmean’s approach to portraying anchoring points could have been of real assistance.

What Carmean uses as a device to show key points of anchorage in an arm or leg, for instance, are small zigzag gestures at both ends of critical muscles as can be seen in Study of an Arm and Legs (shown below). Not only are the key points accentuated with a zigzag stroke but the shape of the line in the zigzag is curved to visually explain the body's curvature. For example, in the first detail of the arm (shown further below), note how the curves in the zigzag denoted as “A” relate to a similar curvature of the lines describing the rounded contours of the figure’s shoulder. Likewise, note how the curves in the zigzag denoted as “B” relate to the contour marks describing his elbow.

As with my earlier digital explorations, I have again tried to adjust my drawing and this time I aimed to introduce the principle of anchor points as may be seen below with the digital modifications shown in the right image. Hopefully, once again other artists will assist me with further enhancements to refine the placement of the anchor points and the phrasing of the zigzag gestures. 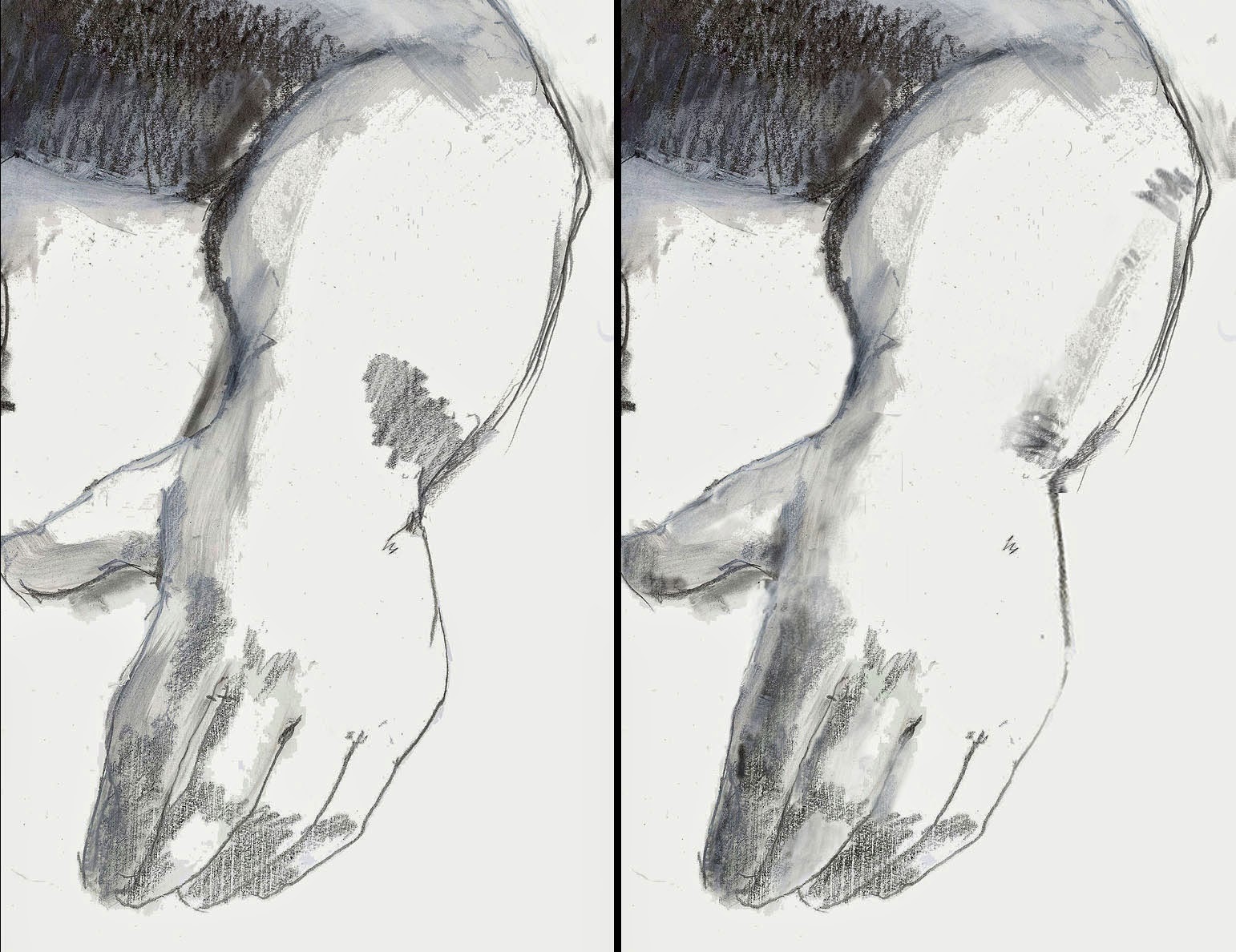 Of course, the use of tensions created between anchor points is not the only way that Carmen adds what Robert Beverly Hale describes in his now classic book, Drawing Lessons from the Great Masters (1964), as “landscape” points within a figure. Similar to artists like Baccio Bandinelli (1493­–1560) who use squiggled marks to accent critical muscle attachment/insertion points (see for example http://drawingdetail.tumblr.com/post/35124089307/baccio-bandinelli-1493-1560-male-nude-from [viewed 8 June 2014]), Carmean also marks critical sites within the figure with heavy lines. For example, in Carmean’s Study of an Arm (shown below) and even more noticeable in his Small Study of an Arm and Study of a Leg (shown further below) he almost maps his subject with nodal spots that help to explain the inner workings of muscles.

In future posts I will return to this discussion about figure drawing as the topic is such a rich field of different artistic practices and where the use of subtle principles can make a large difference to how an image is viewed by an audience. In the meantime the following video featuring Harry Carmean’s teaching is very interesting and helpful.


Harry Carmean on Drawing the Figure (posted on YouTube by Miriam Slater)
Posted by printsandprinciples at 22:42