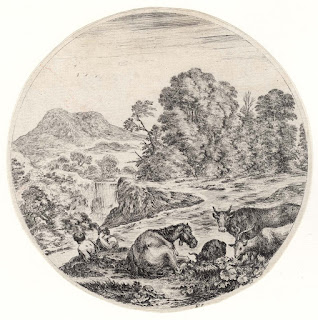 The British Museum offers the following description of this print:
“Landscape with animals; a horse and two shepherds seated and a cow and two goats grazing, with a waterfall behind to left; from a series of 13 round compositions. c.1646 Etching” (http://www.britishmuseum.org/research/collection_online/collection_object_details.aspx?objectId=1502398&partId=1&searchText=della+bella&page=1)

The curator of the BM offers the following information about the series of which this print is a part, “Views of Roman ruins and landscapes”:
“Series of 13 round prints, all depicting views of Rome and the surrounding area, based on drawings made on the spot, many of which were in two sketchbooks (now dismantled) at the Uffizi. In the second state the plates are numbered; the second state of the frontispiece also contains a dedication.” (http://www.britishmuseum.org/research/collection_online/collection_object_details.aspx?objectId=1502212&partId=1&searchText=X%2c5.136&page=1)

I am selling this very beautiful small round etching by one of the most famous of the late Renaissance/Mannerists for AU$215 in total (currently US$165.11/EUR155.94/GBP132.72 at the time of posting this listing) including postage and handling to anywhere in the world.
If you are interested in purchasing this sensitively executed and skilfully composed etching, please contact me (oz_jim@printsandprinciples.com) and I will send you a PayPal invoice to make the payment easy. 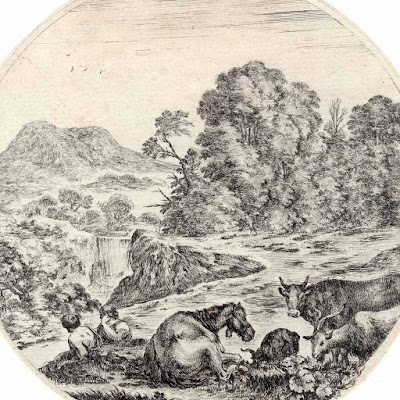 After reading the British Museum’s curator’s advice that this and the other prints of the same series (viz. “Views of Roman ruins and landscapes”) were “based on drawings made on the spot” (see earlier reference) I changed my original thoughts that this print was a romantic concoction steeped in an Arcadian past where lounging classically dressed shepherds gaze out into space and their animals enjoy each other’s company. Now that I am informed that there really is such a place—even if it is only bits of it—I want to be there.

For me, this print is the work of a true master. For example, I am amazed that within an area equivalent in size to a postage stamp that della Bella is able to render the form of the foreground horse with such unambiguous clarity that I could even model it in clay. I am especially impressed with his subtle use of contour-marks that “explain” the curves of the horse’s right flank and his insightful control of the thickness and thinness (i.e. linear phrasing) of the flank's silhouette outline.

Almost as remarkable as the sensitive treatment of the scene is the composition underpinning it. For instance, note how della Bella uses the meandering “S”-shaped curve of the path leading from the centre foreground to invite the eye on a visual journey to explore far into the distance. Even more interesting for me is that the round shape of the image is not perceived to be a flat, but rather it seems three-dimensional like a sphere. What I mean by this is that the artist has arranged the composition so that large forms are towards the centre and smaller ones are at the outer circumference giving the impression of optical distortion as if I were looking into a convex or a spherical mirror. 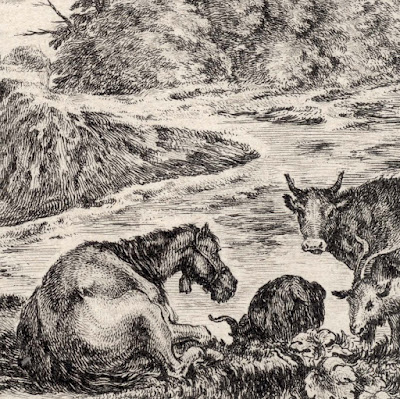 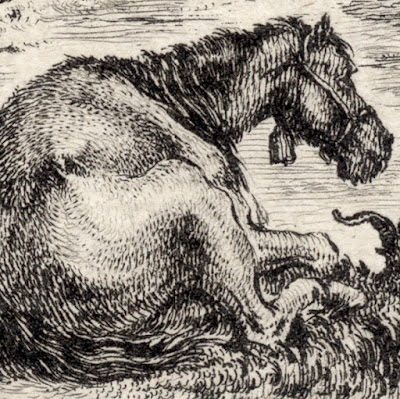 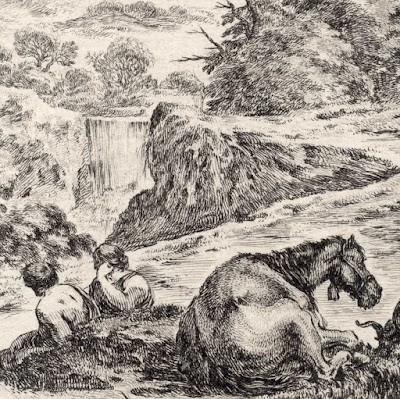 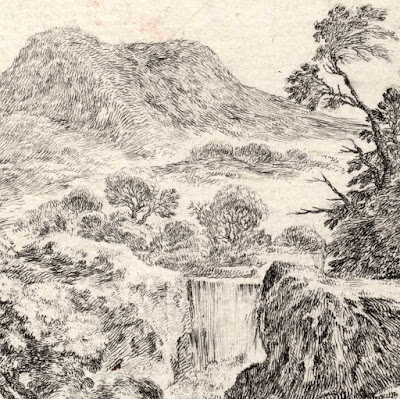 Posted by printsandprinciples at 06:08