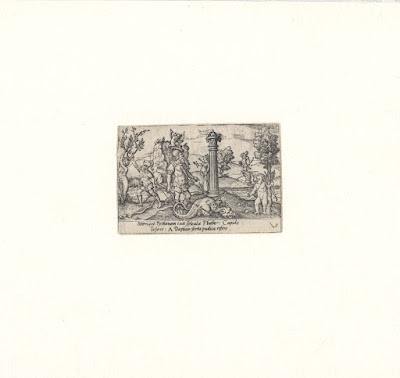 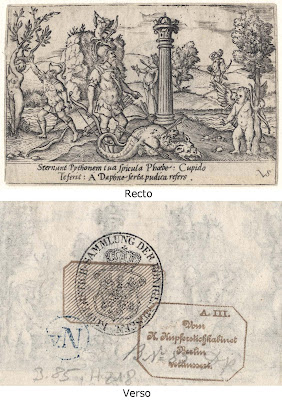 “Apollo with the Serpent Python, Cupid and Daphne” (aka “Apollon tuant le dragon Python” [Bartsch title]), 1530–62, from the series, “Four Mythological Scenes”, published by Georg Rab in consortium with Sigmund Feyerabend and Weigand Han in Frankfurt am Main. The Rijksmuseum advises that this print is an illustration to the “Metamorphoses of Ovidius” from the 1569 publication, “Posthius, Johannes. Tetrasticha in Ovidii metam” (see no. RP-P-OB-22.042 [R]).

The British Museum offers the following description of this print:
“Apollo with the Python, Cupid and Daphne; in centre foreground Apollo with the slain serpent; Cupid standing at right; in landscape background Daphne turning into a laurel tree at left; Cupid aiming at Apollo at centre; from a series of four engravings of mythological scenes.”
(http://www.britishmuseum.org/research/collection_online/collection_object_details.aspx?objectId=1486358&partId=1&searchText=Apollo+solis&page=1)

Condition: a crisp and evenly printed impression with narrow margins around the image borderline. The sheet is in superb condition (i.e. there are no tears, holes, creases, abrasions, stains or foxing) and the edges have been laid upon a window-cut support sheet enabling the previous collectors stamps—four different ink stamps—to be examined.

I am selling this museum-quality engraving in an outstanding state of preservation from the Renaissance period for AU$167 (currently US$126.98/EUR107.77/GBP95 at the time of this listing) including postage and handling to anywhere in the world (but not, of course, any import duties/taxes imposed by some countries).

If you are interested in purchasing this tiny and exceptionally beautiful print by one of the most famous printmakers in the 1500s, please contact me (oz_jim@printsandprinciples.com) and I will send you a PayPal invoice to make the payment easy. 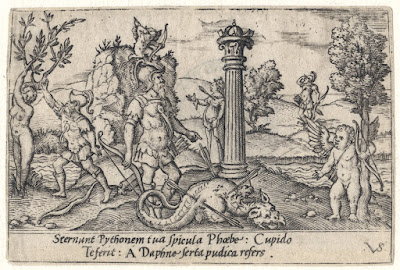 For those unfamiliar with the story of Apollo and the creature known as “Python” featured in the foreground centre of this very small print, I will try to explain what is happening.

Apollo is portrayed as having killed Python with his bow and arrows as it had been running amuck (in mythology) in the countryside around Delphi. As a point of interest, the moment of killing the Python is probably best remembered by one of the most famous of all sculptures: “The Apollo Belvedere” also called “The Pythian Apollo.”

On the far right of the composition is Cupid holding his bow and arrows of love with which he has shot the rather pot-bellied Apollo with a love passion. This act of shooting Apollo is recreated further back in the scene with Cupid shown perched on a mountain shooting not only Apollo in the far distance but also his true love, Daphne, resting beside the column right-of-centre.

On the far left of the scene, Daphne has shed her clothes. More critical to this love story, to escape the love smitten Apollo’s lust filled advance Daphne is shown metamorphosing into a laurel tree.

My apologies for those who may be familiar with the episodes of the story that I have briefly touched upon and are shocked by the omissions and inaccuracies in my account. 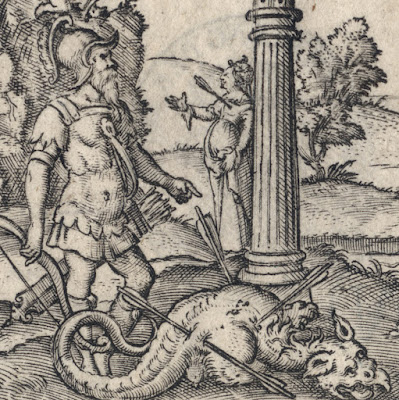 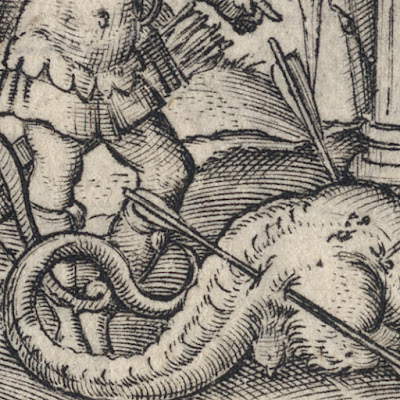 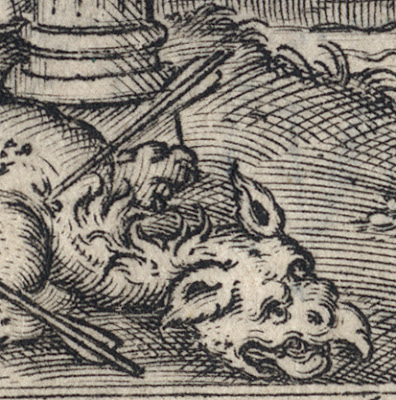 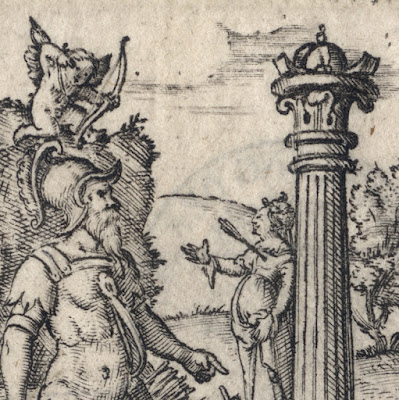 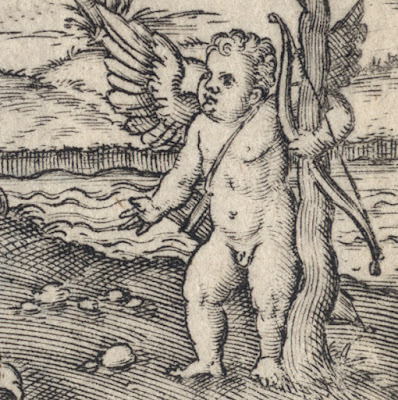 Posted by printsandprinciples at 07:38