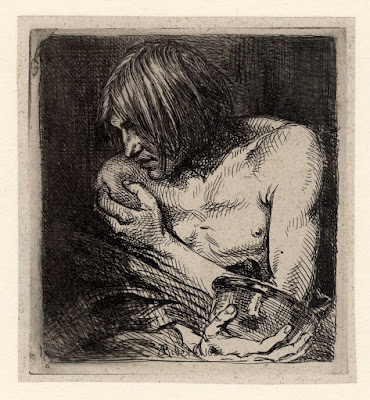 J-J Guiffrey (1866) in “LÓeuvre de Ch. Jacque: Catalogue de ses eaux-fortes et pointes sèches” offers the following description of this print:
(Google Translation) "Seen at half-length, the prodigal son has almost no clothes to cover himself. His long hair hides his face. In one of his hands folded on his breast he holds a bowl. From his right arm hangs a drapery. 1846. This etching was part of the collection of false Ribera of which we have spoken above. First state: Pure etching. Second state: the bottoms and the drapery, which were only unidentified, have become almost black" (p. 77).

The curator of the British Museum advises that this print and the others from the same series referencing José de Ribera were “a group of prints commissioned to Jacque c.1845/47 and signed as Ribera; however they are pastiches rather than copies after the master.” The curator also cites Henri Beraldi (1885) “Les Graveurs du dix-neuvième siècle”, vol. VIII, Paris, p. 180. (http://www.britishmuseum.org/research/collection_online/collection_object_details.aspx?objectId=3360532&partId=1&searchText=Moine&people=119978&page=1)
Guiffrey 1866 137 (undescribed state);  IFF 514 (Inventaire du Fonds Français: Bibliothèque Nationale, Département des Estampes, Paris, 1930.
Condition: rich and well-printed impression, on fine wove (Japan) paper, trimmed with narrow margins and lined on a conservator’s support sheet. Near pristine condition (i.e. there are no stains, tears, holes, abrasions, folds or foxing).

I am selling this original etching by Jacque after José de Ribera for  [deleted] at the time of this listing) including postage and handling to anywhere in the world. If you are interested in purchasing this arresting image, please contact me (oz_jim@printsandprinciples.com) and I will send you a PayPal invoice to make the payment easy. 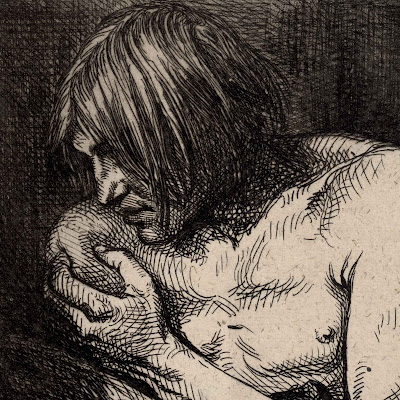 Sometimes an image is wonderful just because of a few details. For instance, what I love about this etching is the way that the portray youth clutches his left shoulder in self-pity. Note how Jacque shows the firmness of the youth’s grasp through a slight overlap of flesh of the shoulder as it obscures the tip of his index finger. Note also how the line defining the silhouette edge of the thumb is strengthened where it presses onto the shoulder muscle. I can imagine that these small details are somewhat insignificant in terms of the “big picture” of illustrating the repentant prodigal son but these are the details that catch my attention.
On a broader view, what I also love is the subtle play of light and shadow on the figure that draws attention to the figure’s plight. Regarding this perception of a youth in distress, I am in awe of Jacque’s treatment of the youth’s hair in that it shows perfectly the hair’s oily dirtiness. 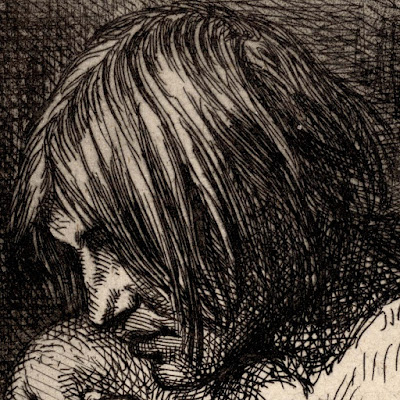 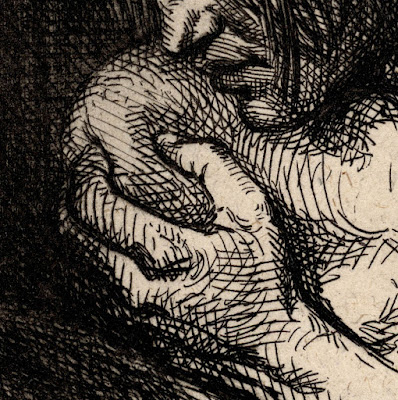 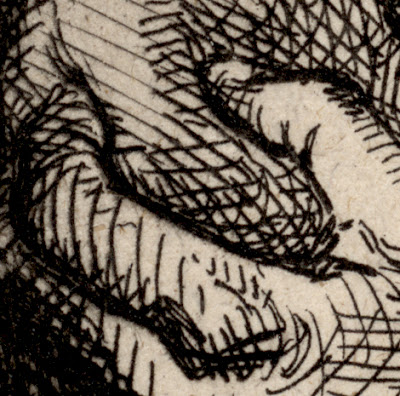 Posted by printsandprinciples at 20:34