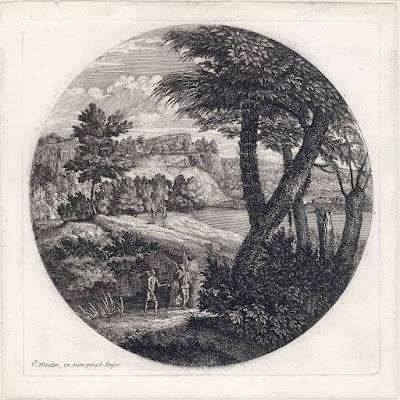 “Tobias and the Angel” (descriptive title only), 1659-90, from a series of 6 circular landscapes published by Adam François van der Meulen (1632–90).
(Note: the British Museum proposes the date for this print to be between 1659 and 1690 but this attribution may not have taken into account that Meulen published Genoels’ prints between 1675 and 1691.)

Not described in Bartsch or Hollstein

The British Museum offers the following description of this print: “Landscape with, in centre foreground, a man (Tobias?) standing on a path and addressing an angel; beyond two nude figures standing at centre; from a series of six; within circle” (http://www.britishmuseum.org/research/collection_online/collection_object_details.aspx?objectId=3079012&partId=1&searchText=meulen&page=2)

Joconde: Portal of the Collections of the Museums of France offers details about this print and the six other prints in the series: http://www.culture.gouv.fr/public/mistral/joconde_fr?ACTION=CHERCHER&FIELD_3=AUTR&VALUE_3=CHIBOUST%20B

Condition: richly inked impression in excellent condition with small margins (varying but approximately 1 cm). The sheet is laid upon a conservator’s support sheet.

I am selling this very romantic landscape with the featured biblical subject of Tobias addressed by an Angel for AU$154 (currently US$114.95/EUR102.59/GBP88.75 at the time of this listing) including postage and handling to anywhere in the world.
If you are interested in purchasing this beautiful print glowing with light, please contact me (oz_jim@printsandprinciples.com) and I will send you a PayPal invoice to make the payment easy. 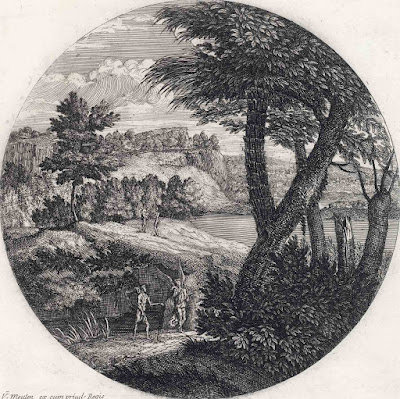 This print has driven me crazy and the reason is all about my attempt to establish the name of the printmaker responsible for its execution. At first I thought that my research had come to an end when I found that the British Museum named the etcher as Abraham Genoels and advised that the print was part of a six plate series published by Van der Meulen (as inscribed on the plate). Sadly, my joy was short lived and doubt set in when I read the BM’s advice that the print was not listed in the catalogue raisonné on Genoels offered by Bartsch or Hollstein. The fact that these sources did not have the print listed is not in itself a problem as both august authorities are known to have shortfalls in their collections of data (for example, in my last post I commented about the error in Bartsch that has not been corrected in TIB regarding Diana Scultori’s name). My consternation is that Joconde: Portal of the Collections of the Museums of France attributes this print and the five others in the series to a somewhat obscure late 17th century printmaker called B. Chiboust. Indeed this artist is so obscure that the Philadelphia Museum of Art shows the first initial of the name as a “P” rather than a “B.” (see http://www.philamuseum.org/collections/permanent/79806.html?mulR=1021048225%7C2).

Now that I have found a disquieting conflict of opinions about the true identity of the printmaker I feel no apprehension about offering my own opinion.

To my eyes this is not a print by Genoels. Genoels did execute seven circular compositions at the start of his career as a printmaker (see TIB 5 [4].1 [323] to 7 [327]) along with a few prints with rounded sections and at least one oval print, but there is a vast difference in the open handling of these formally accredited prints by Genoels and the tightly controlled mimetic style of this print. I also wish to draw attention to the treatment of the portrayed figures in the sense that Genoel’s figures are well-rounded whereas here the figures are slim, attenuated and puckered—to borrow an earlier description of Aldegrever’s treatment of figures. Even the treatment of trees and foliage is different. Genoels’ trees are usually represented with rounded strokes that give the foliage a rather fluffy look whereas here the foliage is rendered with almost mechanically aligned strokes giving the trees a rather spiky appearance. 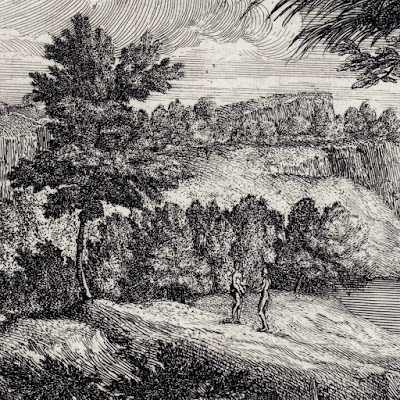 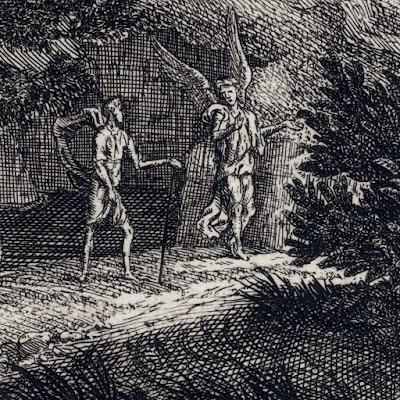 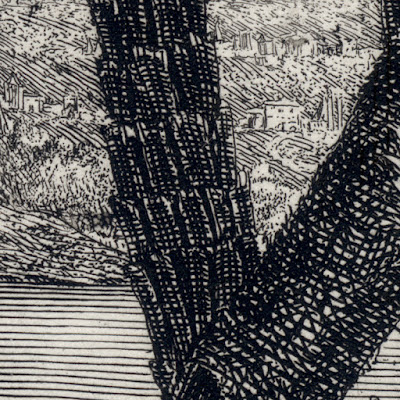 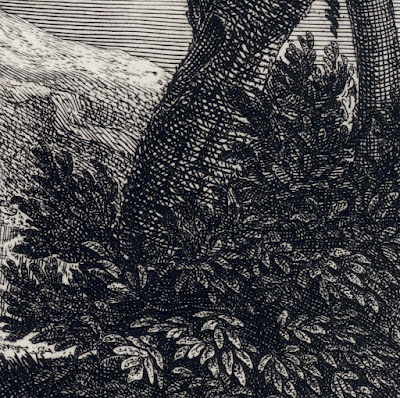 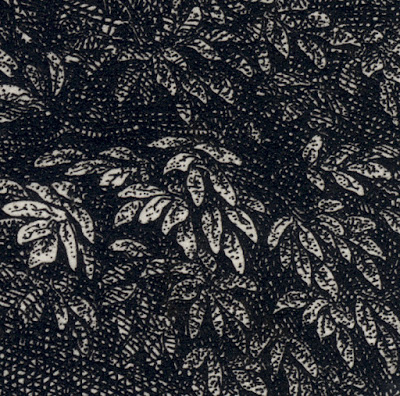