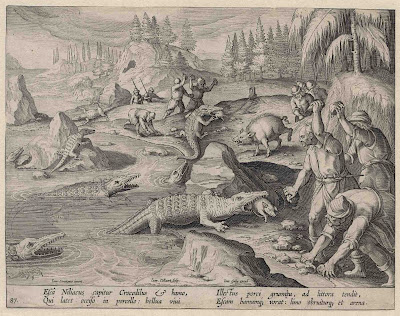 The British Museum offers the following description of this print: “Plate numbered 87, Crocodile Hunt; to left, crocodiles approach the shore of a river, lured by pigs offered as bait; to right, the huntsmen ready themselves to smite the crocodiles with rocks Engraving” (http://www.britishmuseum.org/research/collection_online/collection_object_details.aspx?objectId=1620930&partId=1&searchText=Collaert+crocodile&page=1)

Condition: faultless early impression trimmed to the image borderline and in excellent condition (i.e. there are no tears, holes, folds, stains, abrasions or foxing). The sheet is attached to a support sheet with paper hinges at each corner.

I am selling this important and exceptionally rare image from the 16th century of crocodile hunting in Egypt for the total cost of AU$286 (currently US$211.06/EUR188.02/GBP163.65 at the time of posting this listing) including postage and handling to anywhere in the world.
If you are interested in purchasing this alarming and amazing image created only 84 years after Michelangelo finished work on the Sistine Chapel, please contact me (oz_jim@printsandprinciples.com) and I will send you a PayPal invoice to make the payment easy. 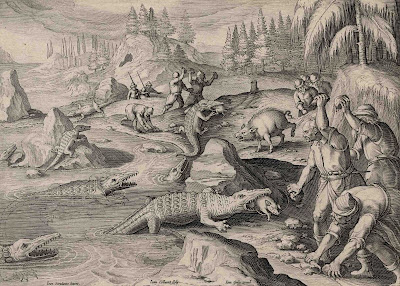 From what I've read this evening, I understand that there are many ways to catch crocodiles. Charles Waterton (1984) in his book, “Wanderings in South America” proposes the early idea of courageously jumping on the crocodile’s/cayman’s back to “conquer him.”

Slightly less crazy—but still crazy nevertheless—Pliny the Elder, the great Roman Naturalist, proposes that crocodiles are best caught by again riding them, but with the added tactic of inserting a length of wood between their jaws and controlling the thrashing monster as if the wood were a bridle bit.

In Egypt the technique may be a little different. Longman (1829) et al. in the “Magazine of Natural History and Journal of Zoology, Botany, Mineralogy, Geology and Meteorology”, Vol. 2, propose two methods. The first (based on an account by Dr Pococke) is to let an animal cry and when a crocodile investigates the noise the crocodile is speared with a length of cord tied to the spear and secured to the shore. The speared crocodile is then allowed to dive into the water to use up its energy by thrashing around. Once exhausted, the poor crocodile is then killed by thrusting a spear into its mouth while brave chaps jump on its back and bind its jaws together.

This illustration shows this second approach involving the seduction of crocodiles using the squeakingly attractive allure of pigs. Here, hunters are shown preparing kill crocodiles by throwing rocks at them. From personal experiences of crocodiles I cannot imagine even for a second that crocodiles would roll over dead if a stone were thrown at them; or for that matter that they would simply lie down to snack on a pig without drawing it into to water with much thrashing and rolling … but I could be wrong! 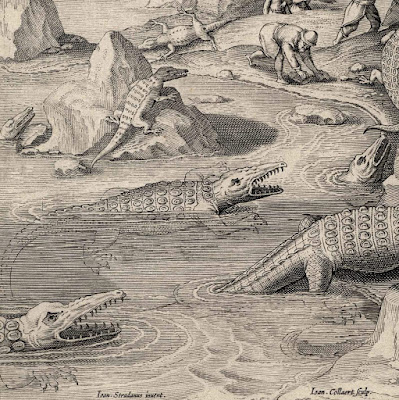 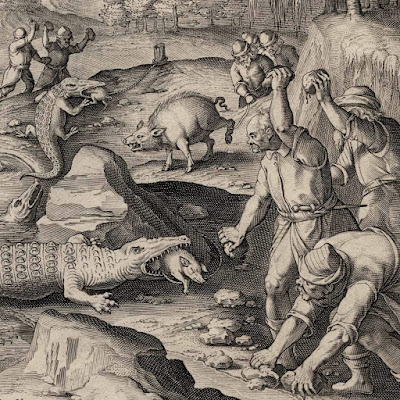 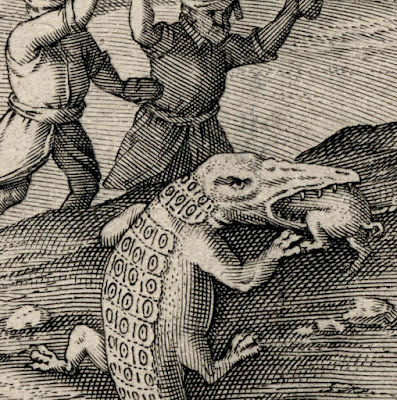 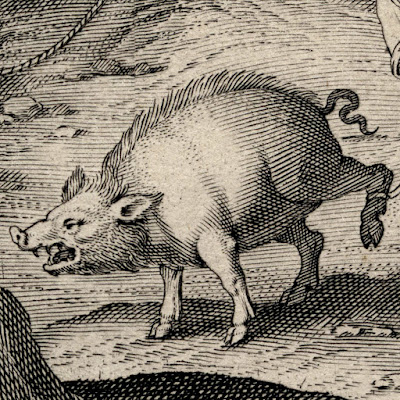 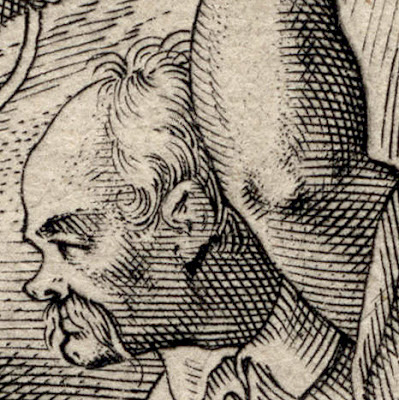 Posted by printsandprinciples at 07:40