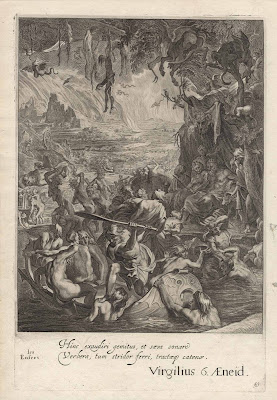 The British Museum offers the following description of this print:
“Mythological scene in the underworld with Charon fighting off souls trying to get into his ferry in foreground, Hades and Persephone seated at right under a canopy made of flayed skin, torture scenes in middle ground; after Abraham van Diepenbeeck; illustration on page 419 from Marolles' "Temple des Muses" (Paris, Nicolas Langlois: 1655).” (http://www.britishmuseum.org/research/collection_online/collection_object_details.aspx?objectId=3234269&partId=1&searchText=bloemaert+virgilius+6&page=1)
Condition: strong impression with margins in excellent condition—almost pristine—apart from two small stains in the right margin. 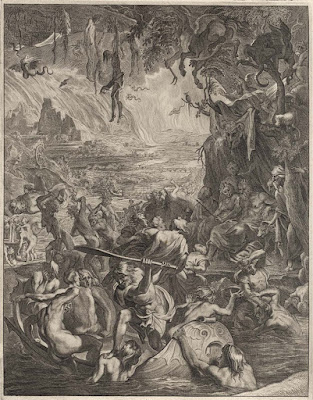 This is a rare image in that it illustrates Virgil’s vision of a turbulent Hell.

Certainly, the muscly figures in the foreground battling with Charon to board his ferry on the River Styx are hard to miss. What my eyes are captivated by, however, are the figures hung like gruesome decorations from the rocky overhang of Hell. Close examination of these limp bodies shows that they are not alone: there are fine specimens of wicked looking monsters on the upper right. Immediately below these winged demons is a skin canopy sheltering the god of Hell, Hades, with Persephone, looking particularly unattractive, by his side

In the middle distance, the arena of Hell is portrayed: the place where figures are being tortured. In this place of horror I can see that one of these figures being held by his hair while being whipped by two ferocious deodorant-free naked men each holding a handful of snakes. Nearby, a limp breasted woman is portrayed about to beat the head of a kneeling figure with club—very nasty stuff! Further back, a reclining figure is shown being pecked by a large bird, while even further into the distance can be seen a figure tired to a rotating wheel while being roasted alive. Thank goodness this vision of Hell is only an illustration. 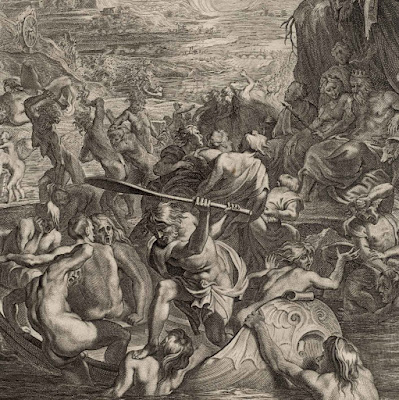 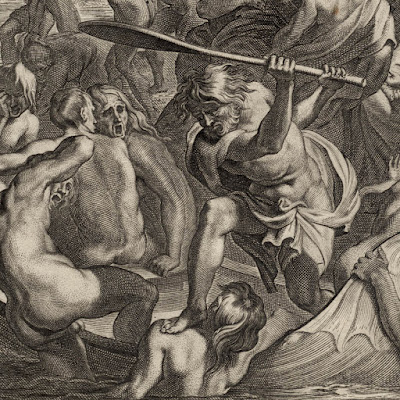 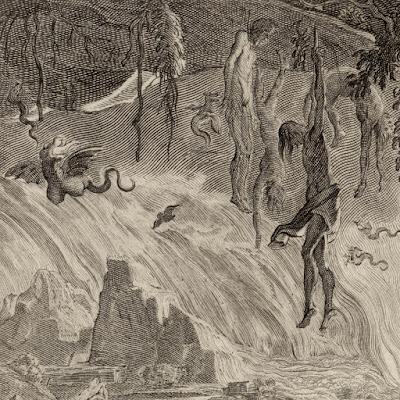 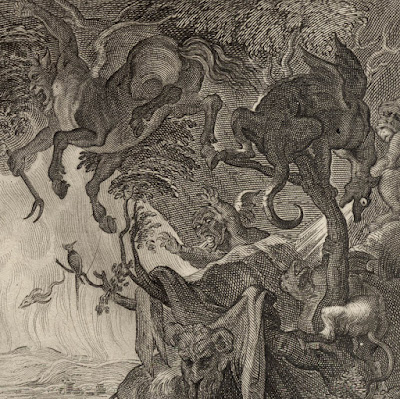 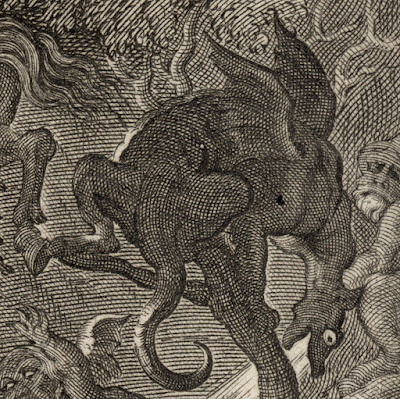 Posted by printsandprinciples at 22:36