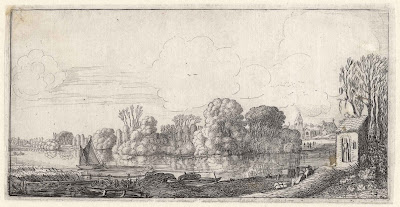 Jan van de Velde II (c.1593–1641)
“Reizigers bij een kapel aan een rivier” (Travellers at a chapel on a river), 1603–41
Etching on fine laid paper with platemark and thread margins. The sheet has been laid on a conservator’s support sheet of fine millennium quality washi paper.
Size: (sheet) 10.2 x 20.5 cm
Inscribed (lower left corner) with the number “3” (signifying that the print is the third in a series of six).

Condition: crisp impression showing the platemark but with thread margins. There is a small stain at the left side of the chapel and light stain from past mounting at the upper left corner. There is also an almost invisible spot of thinness in the paper above the grove of trees on the right side of the image. The sheet has been laid on a conservator’s support sheet with 2 cm margins to assist in future mounting.

I am selling rare print epitomising the Dutch Golden Age of the 17th century for a total cost of AU$182 (currently US$139.63/EUR125.42/GBP111.62 at the time of this listing) including postage and handling to anywhere in the world.
If you are interested in purchasing this small masterpiece showing what the rural scenery was once like in the Netherlands four hundred years ago, please contact me (oz_jim@printsandprinciples.com) and I will send you a PayPal invoice to make the payment easy. 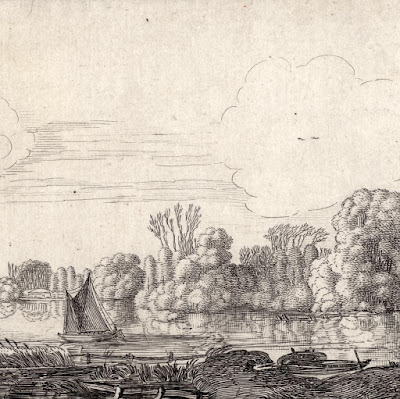 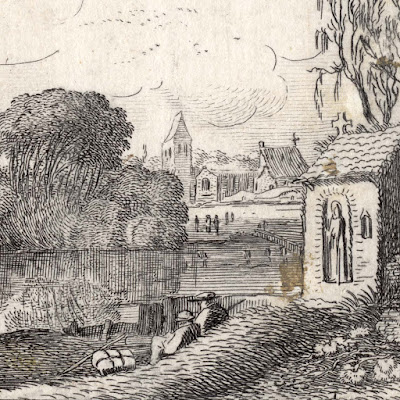 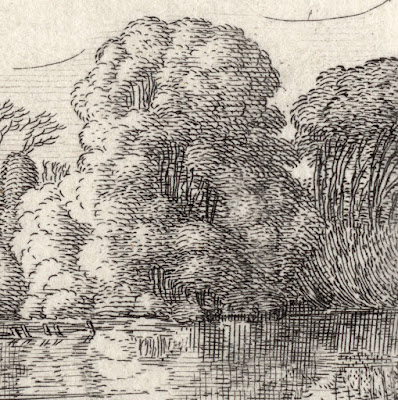 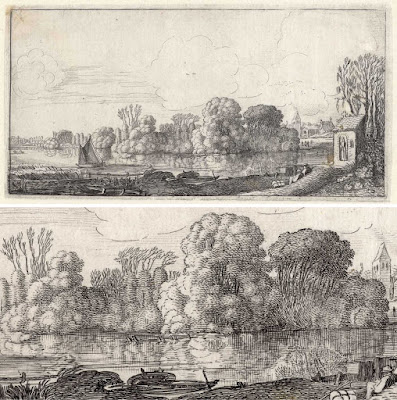 Jan van de Velde could be described as a prolific printmaker as he executed around five hundred plates. Surprisingly, however, very few complete sets of his print suites—like this plate from a set of six prints—are easily found. The reason is not that his work was not popular in his lifetime—he was very popular—but that some of his larger suites of landscapes were destroyed as a result of having been mounted on boards and hung on walls like paintings while many of the smaller prints were disseminated by artists in the 17th century because they were used as teaching aids (see Katheleen Kierman, 2008, “Lonely traveller in a transient world: The landscape prints of Jan van de Velde II donated to the Baillieu Library by Dr J. Orde Poynton”, University of Melbourne Collections, Issue 2 July 2008, p. 15; Clifford S Ackley, 1981, “Printmaking in the Age of Rembrandt”, Museum of Fine Arts, Boston, p. 70).

From a personal viewpoint, the beauty of this print is the way that van de Velde captures the effect of light and air in this long panoramic scene. Indeed I am not alone in admiring van de Velde’s use of wide formatted prints, as Ackley (1981) makes the interesting proposal that they anticipate “Rembrandt’s panoramic etching of 1651 of a view towards Haarlem, traditionally known as “The Goldweigher’s Field” (p. 72).

To separate these two masters—van de Velde and Rembrandt— Ackley points out that van de Velde “does not share Rembrandt’s interest in using line sparingly to suggest or evoke in shorthand fashion the unifying atmosphere of the landscape. He glories in the ornamental, pattern-making possibilities of the etched line” (ibid).