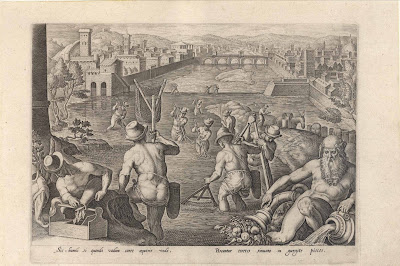 Note: according to the curator of the British Museum’s explanation about the series, this impression is from the first edition of 43 unnumbered plates that were all engraved by Philips Galle with a dedication page to Cosimo de Medici. After this edition the series was expanded to 104 plates engraved by A. Collaert, J. Collaert, C. Galle I and C. de Mallery with a dedication page to the jurist Henricus van Osthoorn en Sonnevelt (see http://www.britishmuseum.org/research/collection_online/collection_object_details.aspx?objectId=1619537&partId=1&people=93957&peoA=93957-2-70&page=1 and A. Baroni and M. Sellink, “Stradanus 1523-1605: Court artist of the Medici”, exh.cat. Groeningemuseum Brugge 2008-2009, Turnhout, 2012, pp.245–58, cat.nos.32–49.). In the later expanded edition of 104 plates, this plate was numbered “96” on the lower left.

Engraving on laid paper with margins as published in the first edition of 1578.
Size: (sheet) 24.3 x 36.3 cm; (plate) 21.8 x 29.6 cm
Lettered below the image borderline: “Sic, humili si quando vadum caret aeqouris unda, Piscantur teretes sinuato in gurgite pisces.”
State: i (of ii) (?) before the addition of the number, “96”, at lower-left below the image borderline.

The British Museum offers the following description of this print from the later edition when the plate was numbered:
“Plate numbered 96, Fishing with Dip Nets on the River Arno; fishermen wade in the river Arno, seen receding into the distance, with dip nets; to left and right, the city of Florence flanks the river; in the right foreground, a river god, holding a cornucopia, is seated upon a lion, representing Florence”  (http://www.britishmuseum.org/research/collection_online/collection_object_details.aspx?objectId=1621028&partId=1&searchText=Jan+van+der+Straet+&page=6)

Condition: Marvellously crisp, lifetime impression (see explanation above). There is a tear in the sheet at lower left and a spot stain on Neptune’s beard but these issues has been addressed by restoration and are virtually invisible. The whole sheet is laid onto a support sheet of conservator’s fine archival/millennium quality washi paper.

I am selling this exceptionally rare, museum-quality engraving from the late 1578 for a total cost of AU$256 (currently US$202.64/EUR172.13/GBP157.78 at the time of this listing) including postage and handling to anywhere in the world. 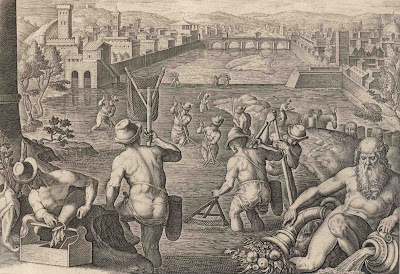 I would love to focus on the interesting hats that these chaps wear as they look so modern—and so Italian!—and yet they were clearly the rage for fishermen in the late 16th century. I especially like the jaunty shape of the hat worn by the lower-left fisherman; its flattened brim at the front almost advertises that he is a true party animal. To be frank, however, I know next to nothing about hat fashions for dip-net fishermen during the Renaissance period.

One feature of the print that I feel more at ease in discussing is Galle’s approach to rendering the fishermen. More specifically, the way that he darkens the background around the side of the figures that is in light and lightens the tone of the background on the side of the figures that is in shadow. For example, note how Galle has added a dark halo of tone to accentuate by tonal contrast the light falling on the left elbow of figure in the foreground with his back to us while simultaneously lightening the background on the right side of the same arm where it is in shadow.

Galle uses this simple but important principle—what Paul Klee termed exotopic (i.e. outside area) and endotopic (i.e. inside area) contrast of tone—consistently throughout this engraving and the closer that I examine the print the more subtle his application of it appears. Of course, Galle was far from being the only Renaissance artist to apply the principle (see, for example, my earlier post where I discuss Johan Sadeler's use of it), but what is exciting for me is knowing that the principle is employed so seamlessly that a casual viewer might not even see the mastery of its application at all … that is, until it is pointed out. 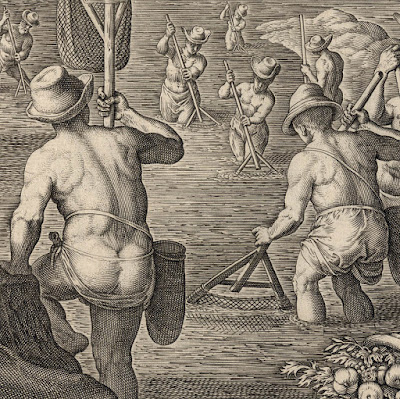 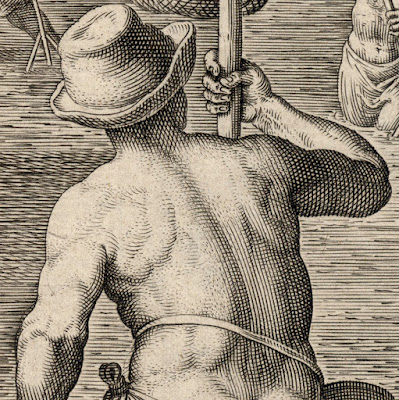 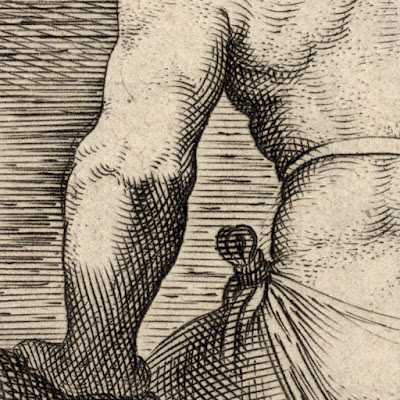 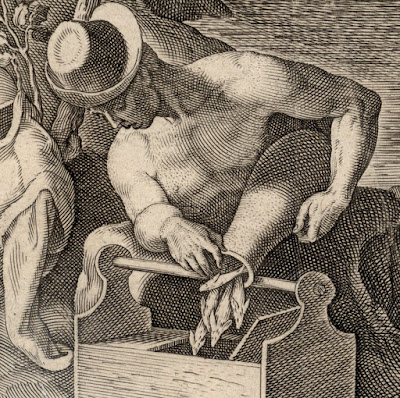 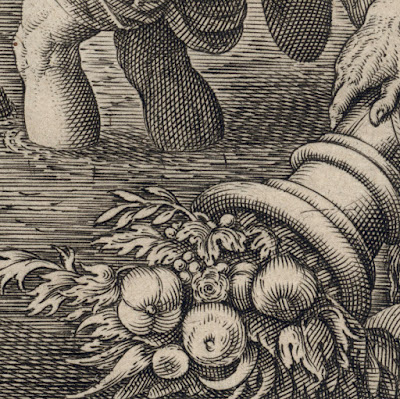 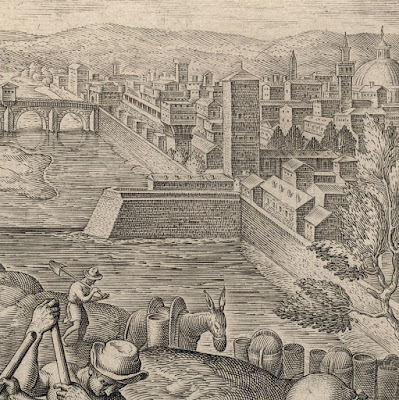 Posted by printsandprinciples at 08:00