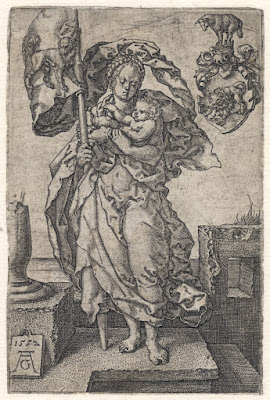 “Charity” or “Love of the neighbour” (L’amour du prochain), 1552, plate 6 from the series of 7 engravings, “Virtues and Vices” (BM) or “Seven Virtues” (Rijksmusem). Note that there is another engraving by Aldegrever titled by TIB as “Charity” from the same series but with the shortened title in French, “La charité” (TIB 16[8].122 [400]).

Engraving trimmed at the image borderline on fine laid paper lined with a support sheet.
Size: (sheet) 9.5 x 6.3 cm
Signed with monogram and dated on a tablet at lower left.
The two lines of Latin text below the image borderline have been trimmed off but would have shown: “Viribus inudiae soboles spoliatur Amori. / Quaem sequitur recta spesque fidesque via.”

The British Museum offers the following description of this print:
“Holding a child; with a lion on the escutcheon at right and a dog on the flag at left; from a series of whole-length female personifications of the virtues in frontal view with their respective attributes on banners and shields.” (http://www.britishmuseum.org/research/collection_online/collection_object_details.aspx?objectId=1509105&partId=1&searchText=aldegrever+charity&page=1)

Condition: a good but not magnificent impression that has been trimmed of its text box. The sheet has been laid onto a support sheet and there are some minor restorations that are so small that they are virtually invisible.

I am selling this original print from the Renaissance era by one of the major old masters for AU$364 (currently US$281.43/EUR230.72/GBP204.58 at the time of posting this listing). Postage for this print is extra and will be the actual/true cost of shipping.

If you are interested in purchasing this VERY small masterpiece of engraving, please contact me (oz_jim@printsandprinciples.com) and I will send you a PayPal invoice to make the payment easy. 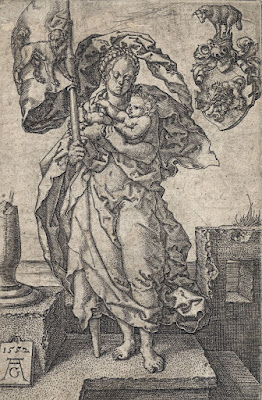 Oh my gosh!! … when I read the description of this print offered by the Rijksmuseum (see http://hdl.handle.net/10934/RM0001.COLLECT.30560) I was a little more than excited. The description begins appropriately: “Personification of charity. Woman with child on her left arm, in her right hand a banner with a picture of a dog.” But then—and this is a VERY big “BUT”—the description takes a trajectory that is off the planet: “Right above a coat of arms with the lioness blowing her dead boy into the air, on top of a lamb.” Goodness me! I needed to see that! … and I had no idea how a lioness “blowing her dead boy into the air” could EVER symbolise the warm-hearted sensitivities of kindness and agenda-less generosity that I understood underpinned the virtue of charity. Well I’ve decided that the curator must be looking at a different print or “Google translate” is equalling what the party animal “Siri” on my phone gives me when I ask questions. To be frank, the lion (I don’t think that it is a lioness as the beast has a mane) in the escutcheon is not blowing a boy in the air but it may be playing with one or two cubs. Going further, the sheep is above the lion rather than below it. Ahh well! I should mention at this point that there is an alternative title for this print, “Love the neighbour” or “Neighbourly love”. Again, however, I have an issue if the lioness shown in the escutcheon were to be “blowing her dead boy into the air, on top of a lamb.” This is all too silly but I still like the Rijksmuseum’s description of what may be found in this tiny of tiny prints. 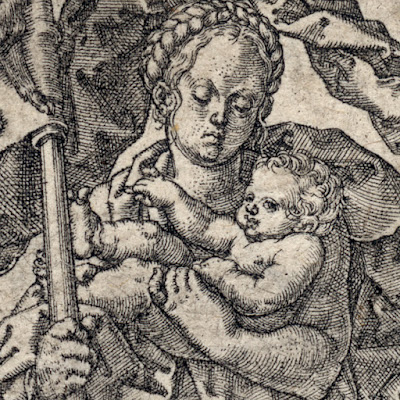 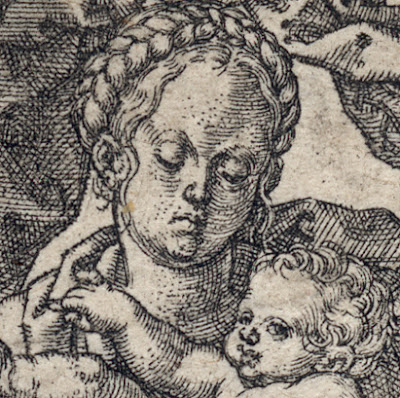 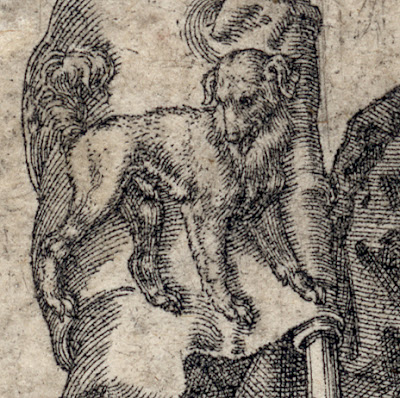 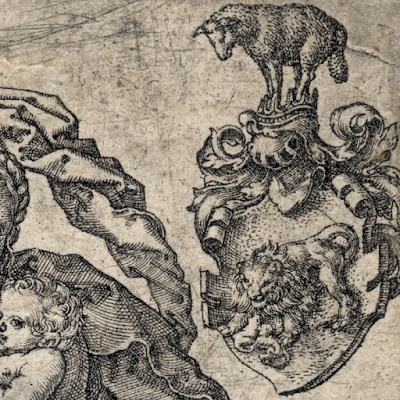 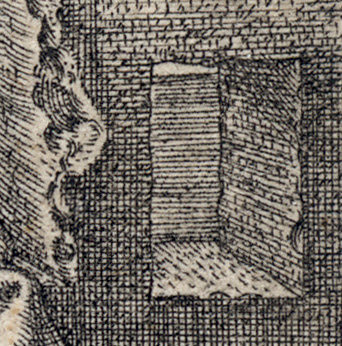 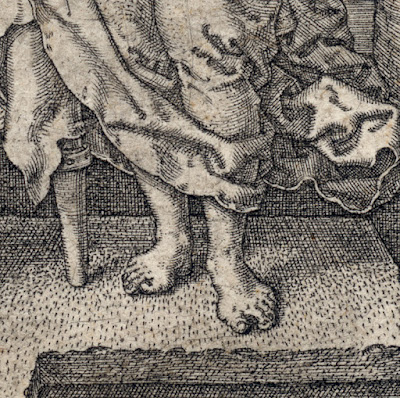 Posted by printsandprinciples at 20:49