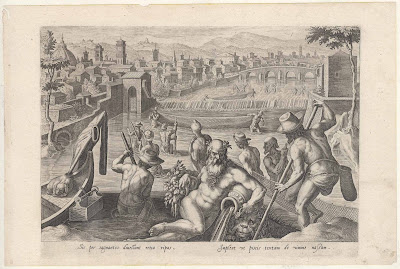 Note that I have posted another print by Galle from the same series that also shows men fishing on the River Arno: http://www.printsandprinciples.com/2017/08/philips-galles-engraving-fishing-with.html

The Rijksmuseum offers the following description of this print (trans.):
“In a river, fish are caught by a trawl. The print has a Latin caption and is part of a 43-part series about the hunt.” (http://hdl.handle.net/10934/RM0001.COLLECT.114998)

The British Museum offers the following description of this print from the later second state:
“Plate numbered 98, Fishing with Drag Nets on the River Arno; in the foreground, a river god holding a cornucopia is seated upon a lion, representing Florence; beside and beyond him fishermen men wade in the river with poles and nets; the city of Florence flanks the river to the left, with the dome of the Duomo visible “
(http://www.britishmuseum.org/research/collection_online/collection_object_details.aspx?objectId=1621018&partId=1&people=124229&peoA=124229-2-60&page=2)

Condition: Crisp, lifetime impression (see explanation above) laid onto a support sheet of conservator’s fine archival/millennium quality washi paper. There is a wormhole in the sheet at upper-left corner of the margin and a few handling marks in the margins towards the lower right corner, otherwise the sheet is in exceptional good condition for its age.

I am selling this rare, museum-quality engraving—executed only 37 years after Michelangelo completed the “Last Judgement” in the Sistine Chapel—for AU$256 (currently US$200.78/EUR162.96/GBP144.03 at the time of this listing). Postage for this print is extra and will be the actual/true cost of shipping. 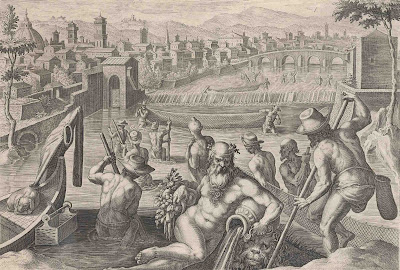 In my previous discussion about Galle’s engraving also featuring men fishing on the river Arno in Florence—note the dome of the Duomo at the upper left—I drew attention to Galle’s approach to rendering the fishermen. More specifically, the way that he darkens the background around the side of the figures that is in light and lightens the tone of the background on the side of the figures that is in shadow; see, for example, how Galle has darkened the background next to the left shoulder of the standing figure on the right to accentuate, by tonal contrast, the light falling on his shoulder and lightened the background next to his bottom to accentuate the shadows in that region.
For this discussion I thought I might focus on the water cascading over the weir wall in the middle distance. What I find interesting about Galle’s approach to representing this cascade is that he has cleverly suggested the directional flow of the water current above the weir by using a pattern of white lines (i.e. gaps between marks) in the horizontal lines describing the surface plane of the water and, importantly, showed the water depth in the cascade with tiny strokes on the upper edge of the submerged weir wall. Note also how Galle has given three-dimensional modelling to the light and shade on the cascading water. Fascinating! 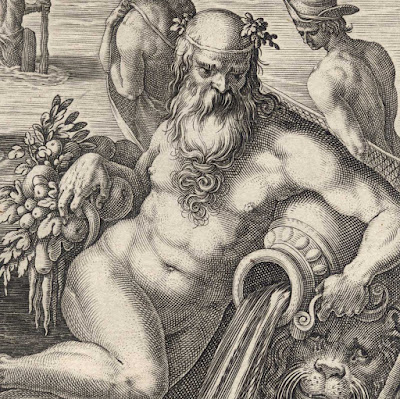 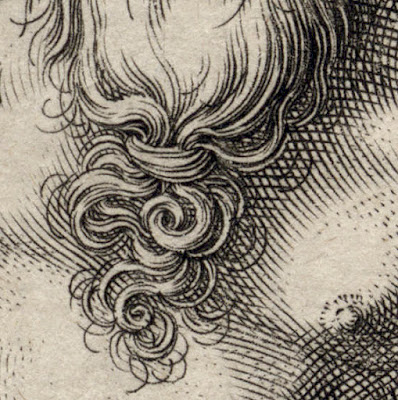 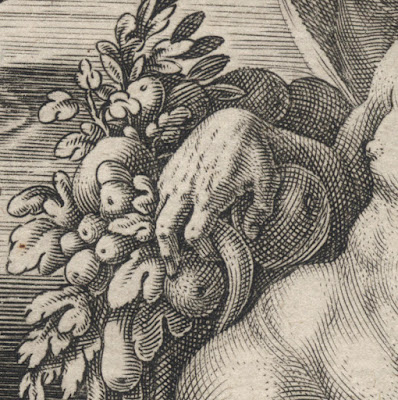 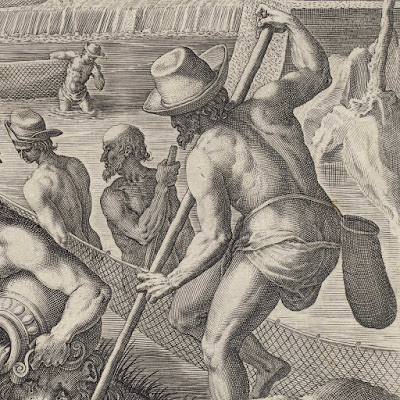 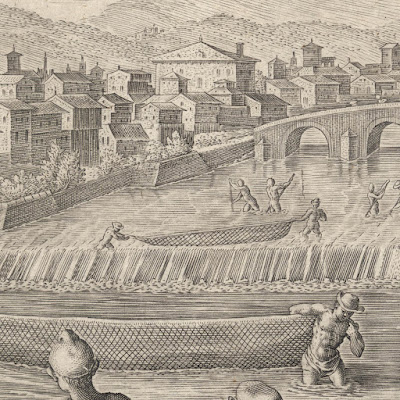 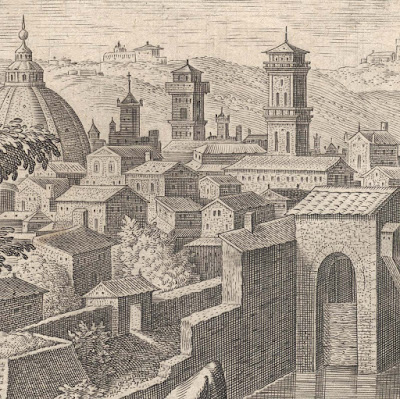