What are some of the principles guiding artists when creating round images?

Before discussing some of the principles guiding artists when they create round images, I wish to explain the subtle differences separating the various round formats that tradition has named tondi, roundels and medallions.

As a broad and simple definition, tondi (plural for the singular term “tondo”) are round compositions designed to be independent of other images, as shown below in Phillips Galle’s (1537–70) spectacular engraving, Samson Smiting the Philistines with the Jawbone of an Ass after van Heemskerck (1498–1574).


Roundels are also round compositions, but, unlike tondi, roundels are designed to fit into the matrix of larger compositions, such as the inset round image of putti presenting a mirror to Apollo in Jean le Pautre’s (1618–82) architectural design shown below.

Unlike tondi and roundels, medallions, as the name suggests, are formal designs such as those found on coins or medals. They are usually smaller than tondi and roundels, but this is not always the case, as is exemplified by the very large engraving shown below by Bernard de Montfaucon (1655–1741), Largesse de Valentinien II, featuring somewhat worn aspects of a coin found in Geneva.

In the above brief explanations of terms, I have omitted some defining attributes that are not so relevant to prints; for example in a review of Roberta Olson's “The Florentine Tondo” (2000) in The Art Bulletin (Vol. 83, No. 2, June 2001, p. 349), the importance of size in differentiating each format is clarified:

The term [tondi] is usually not used in English for small round paintings, but only those over about 60 cm (two feet) in diameter, thus excluding many round portrait miniatures – for sculpture the threshold is rather lower. (The Art Bulletin, Vol. 83, No. 2, June 2001, p. 349)

Not wishing to dwell any longer on definitions, let me begin by focusing this first instalment of the discussion about round formats solely on tondi.

Tondi are usually presented contained within a square shape, as seen for example in Johann Elias Ridinger’s (1698–1767) etching, shown below, after Johann Heinrich Roos’ (1631–85) design. One reason is for this arrangement is a straightforward and practical: a square is easier to frame than a circle. Another reason is that a circle is more difficult to cut as a printing plate than is the case with a square. Beyond these technical advantages, a square picture hung on a wall is more likely to be in accord (i.e. “fit in”) with rectangular shaped artworks along with the perpendiculars and horizontals of surrounding architecture.

What I find interesting about this “squaring” of the circular format (i.e. framing a tondo within a square) is that this arrangement lends the suggestion of dynamism to the circular image. By this I mean that a tondo composition appears to have more rhythmic life and pictorial vitality when it is framed within a square by virtue of a viewer perceiving contrast—perhaps subliminally—between the calm and stable shape of a square abutting the constantly revolving energy of the tondo’s round shape.

From a more philosophical standpoint, the idea of adding an outer square boundary to a round composition has special significance, as this dual border format has resonance of the yin and yang duality: the union of complementary forces of the negative, dark and feminine energies of the yin (the circle) with the bright, positive and masculine energies of the yang (the square) (see http://www.thefreedictionary.com/yin+and+yang [viewed 1 March 2015]).

Such a philosophical resonance extends far back to Neolithic times as seen, for instance, in the mysterious cong sculptural objects (see photograph of an example and a video clip discussion of cong artefacts below, along with an explanation of these objects at the British Museum:
http://www.britishmuseum.org/explore/highlights/highlight_objects/asia/j/jade_cong.aspx [viewed 1 March 2015]). Interestingly, in these ancient artefacts the yin forces are embodied in the square elements and the cylindrical form embodies the yang forces.

Beyond the inherent symbolism of a squared circle and the practical reality for the printmaker that cutting a square metal plate and inscribing a circular design within it is easier than cutting a circular metal plate, an important principle in creating a tondo is to ensure that there are horizontal and vertical elements within the circular image itself. The need to employ these elements is simple: horizontals and verticals in a tondo give stability, or, to express this differently, they stop a circular composition from appearing to spin.

To demonstrate the importance of employing this principle, in the pair of images of Ridinger’s design shown below, I have juxtaposed Ridinger’s original design (the lower image) with a digitally adjusted version of it (the upper image). In the upper image, all of the horizontal and vertical elements of the original design have been either erased or blurred to illustrate the effect of instability when the principle is not applied. From my viewpoint, the composition of the upper image seems to be visually floppy and sliding in a clockwise direction in the sense that it lacks a supporting skeleton framework. No doubt, a more ruthless culling of horizontal and vertical elements would make the digitally adjusted version appear that it is even less anchored.

I should also mention that even the finely inscribed horizontals defining the square framing the round image have an effect. For me, they not only provide a mid-tone to the overall print so that the pictorially lit areas in the tondo look luminous but they also visually ground the tondo in the sense that they stabilise (i.e. “anchor”) the composition. To demonstrate the importance of Ridinger’s use of this device, once more I have created dual images (shown below) in which Ridinger’s original design (the lower image) is juxtaposed with a digitally adjusted version of it (the upper image) where all trace of the inscribed horizontal lines has been eliminated. Again, my intention is to show how Ridinger’s original composition suffers when denied a support of verticals and horizontals—disregarding in this demonstration the inherent vertical and horizontal format edges of the square plate itself.

The second principle that artists use to compose a tondo is one that can be applied either intuitively or by careful calculation: placement of the centre-of-interest following Golden Section proportions (also called the Golden Mean, Golden Proportion and for those with a leaning to the divine—Sacred Geometry (see a broad outline of this principle at http://www.crystalinks.com/sg.html [viewed 24 April 2015]).

When a round format is read from left-to-right along its horizontal diameter, there are two critical Golden Section points of focus that a viewer senses intuitively as being the ideal aesthetic “resting” spots for the eye’s journey (see the two points, “A” and “B”, in the diagram below). For geometricians, these points are of profound significance in terms of a correlation of proportional relationship of lengths along the diameter that they mark—a concept that I have attempted to show in the lower part of the diagram using the letters “A”, “B” and “C.” 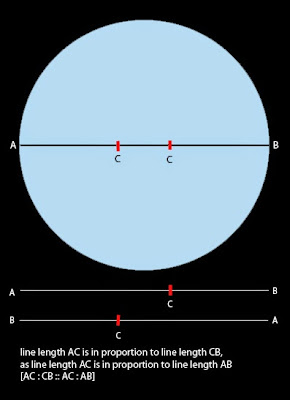 Without relying on intuition to gauge the Golden Section point on the diameter, the following four steps and illustrations shown below may be useful.

The above diagram illustrates how to plot the first Golden Section point that the eye encounters in a left-to-right reading of a tondo’s diagonal. To plot the second point, the same four-step procedure can be mirrored (i.e. flipped horizontally) so that the perpendicular of the first stage is erected from point “B” instead of “A.” Of course, once the proportions have been plotted for the first Golden Section point, the measurements can be simply transposed for a right-to-left reading.

To plot the Golden Section intersections relating to the horizontal and vertical diameters (i.e. the axes) within a tondo, lines need to be extended from the two points on each axis until they intersect as shown in the diagram below. The resulting points of intersection are the four key sites that artists tend to dispose their centres-of-interest in tondo compositions. Only one of these sites, however, are used in a single composition rather than all four. Each site has its own inherent power and I have numbered the sites according to how attention grabbing each site is to the eye. 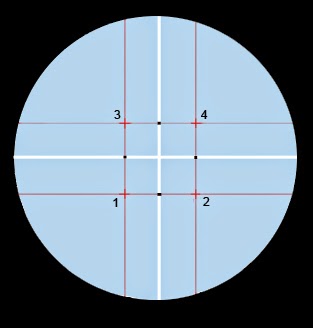 Golden Section intersection numbered “1” in the above diagram arguably “grabs” most viewers’ attention as an aesthetically appealing site where the eye lingers more than any of the other intersections. The reason for this is linked to most viewers’ tendency to examine images from the lower-left and to then read them in a diagonally direction to the top-right. Consequently, number “1” is the first intersection that the eye encounters and hence it is the strongest in a visual—“eye-grabbing”—sense. Following the same logic, the remaining three intersections all have their own unique attention grabbing strength and I have numbered them in the above diagram according to this principle.

In Gabriel Perelle’s (1603–77) Plate 21 (shown below), for example, the artist has arranged his composition around the Golden Section intersection numbered “1” (see diagram further below) by placing a comparatively isolated grove of trees on this spot. As a consequence of being placed in this position, the grove of trees is the key point of focus in the composition. From my reading of this image, it is a focal point arrived at following a pathway of light patches of land arranged as if they were stepping-stones leading into the distance. Also from my reading, the grove of trees marks the furthest aspect of the relatively flat lie of the land before it rises into mountainous terrain. Or to express this with a slight leaning to the poetic: the grove of trees marks the point of transition from the temporal plane inhabited by the three groups of travellers to the spiritually transcendent plane punctuated with estate buildings and distant mountains. In short, the position of the grove of trees is both a natural spot for the eye to linger, but it is also a spot that has meaningful importance.

These two descriptive terms (“circular” and “round”) for a tondo format may seem interchangeable with only pedantic writers concerned about the difference. Moreover, even the British Museum uses the word “circular composition” in their description of Johann Elias Ridinger’s etchings from the series, Mammals after Roos (see http://www.britishmuseum.org/research/collection_online/collection_object_details.aspx?objectId=1616420&partId=1&people=109921&peoA=109921-2-60&page=5 [viewed 5 May 2015]) to describe a format that is clearly a composition conceived as a sphere (i.e. a round composition). While not wishing to be firm that writers need to choose the appropriate word, for artists, the need to be certain about what they are intending to project is important.

In the case of Galle/van Heemskerck’s Samson Smiting the Philistines with the Jawbone of an Ass (see the first tondo in the present discussion) I am ambivalent as to whether the composition was conceived as an image formatted with a circular edge or whether the composition was envisaged to show a scene contained within a sphere with a resultant round edge. From my viewpoint the size and foreshortening of Samson shown towards the centre of the composition suggests that the scene was intended to be perceived by viewers as spherical. As an experiment shown below, I have digitally morphed Galle/van Heemskerck’s print to enhance the illusion that its composition is spherical.

As an extension of the digital experiment, I have added colour and tone to the spherised image, as shown below. By intention, the warm golden colours applied to the centre area of this digitised image visually project Samson towards the viewer while the combination of light tones on the upper-left and dark tones on the lower-right help to portray the whole scene as if it were embedded in a glass sphere.

Although I have only lightly touched upon some of the key principles underpinning tondi compositions, in the next instalment (Part 2), which focuses on roundel compositions, many of the principles discussed are also applicable to tondi. The essential difference, of course, between the principles used in tondi and those used in roundels is all about context. By this, I mean that in roundels the principles work in collaboration with the larger composition of which the roundel is only a component.
Posted by printsandprinciples at 04:34 No comments: