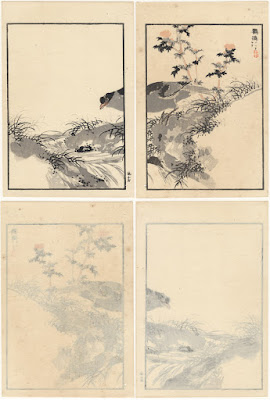 I am selling both prints (i.e. the two panels of the diptych) for a total cost of [deleted] at the time of this listing) including postage and handling to anywhere in the world.
If you are interested in purchasing these original woodcut prints by Kono Bairei, please contact me (oz_jim@printsandprinciples.com) and I will send you a PayPal invoice to make the payment easy. 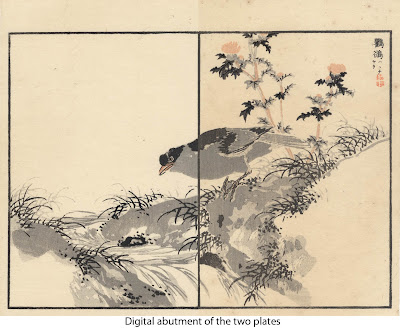 I can imagine that some viewers—hopefully not too many—would prefer to see the wonderful two-panel woodcuts by Bairei trimmed, glued and abutted so that the two panels can be seen as a single uninterrupted image (as shown in my digital abutment above). Often in the marketplace Bairei's prints—like this fine pair—are merged with glue to satisfy such a desire. For me, however, the trimming and gluing of Bairei’s prints is a shame, as they were originally designed to be two facing pages in a bound book that, when opened, would appear as a single image.
From my standpoint, the borderlines separating a viewer’s reading of the two panels is not a significant hurdle impacting upon looking at the prints. In fact, I believe that the borderlines may even help to articulate a viewer’s reading, in the sense that the visual interruption posed by the borderlines helps to slow down a viewer’s reading. 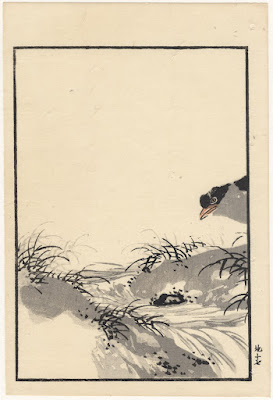 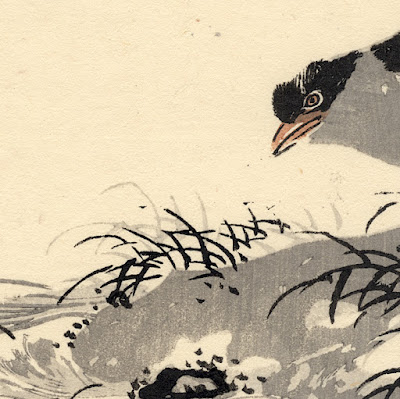 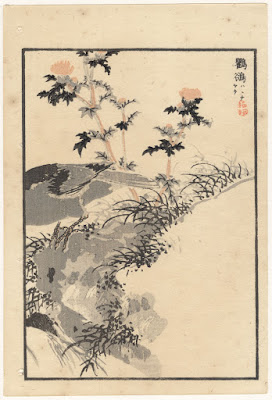 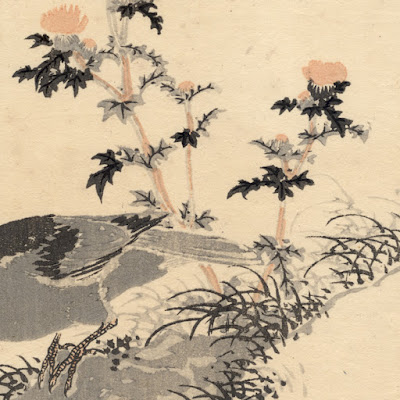 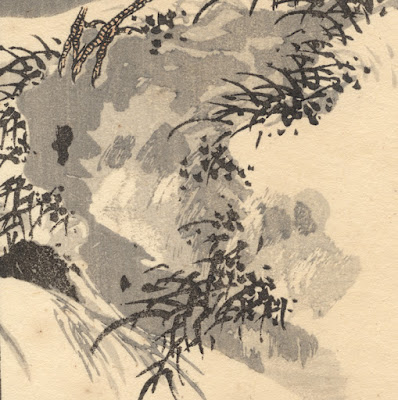 Posted by printsandprinciples at 05:49 No comments:

Email ThisBlogThis!Share to TwitterShare to FacebookShare to Pinterest
Labels: Bairei 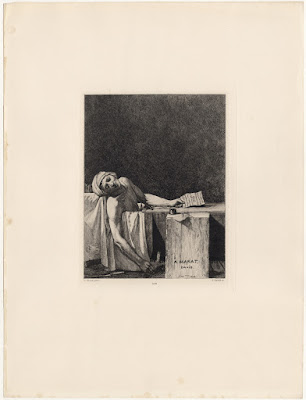 I am selling this delicately executed print for the total cost of AU$65 (currently US$48.75/EUR43.93/GBP36.97 at the time of posting this print) including postage and handling to anywhere in the world.
If you are interested in purchasing this masterly translation of Jacques-Louis David’s painting into etched line, please contact me (oz_jim@printsandprinciples.com) and I will send you a PayPal invoice to make the payment easy. 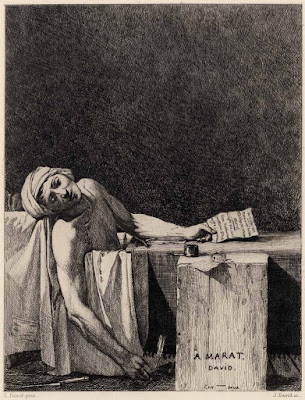 This is the second etching that I have posted recently by Charles-Louis Jules David (the son of the grand Neo-Classical painter, Jacques-Louis David). I suspect that all folk would know this image very well as it has risen to fame as an icon of French culture even if Marat himself may not be a cherished figure by everyone.

Sometimes a reproductive etching of a painting executed solely in black line is more than a mimetic representation. This is certainly the case with this small masterly print. Like the work of a master, the use of line replicates more than the tones of the painting. From my way of looking at the etching, the black lines also suggest passages of translucency and opacity of the painting’s colour. For example, the curved crosshatched lines describing the contours of Marat’s flesh capture the luminosity of the transparency of the glazed colours of the painting in this area in contrast to the straight lines of crosshatching rendering the opaque depth of the background colours. If I may go a little further with this proposal, the mixture of loosely hatched strokes laid over a field of vertical lines describing the textures of the crude table on which the bottle of ink rests projects a solid opaque surface that is very different to the attributes of Marat’s flesh and the far distance.

In terms of black lines representing colours, this notion is not as vague as one might imagine. The code of heraldic representation of colours (e.g. blue is horizontal, red is vertical and black is a combination of horizontal lines over vertical lines … amongst the other colours signified by heraldic code) is still used in electrical engineering—so I am told. Consequentially, at a subliminal level, the arrangement of the different hatched strokes suggest colours. In this reading of the print, the hatched strokes of the background express black, the angled strokes rendering Marat’s body express the heraldic colours of green and purple, and the mixture of strokes rendering the table express a yellow-red. 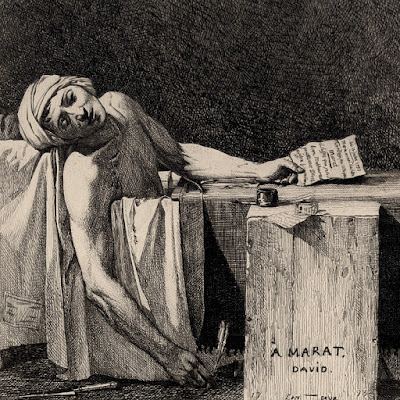 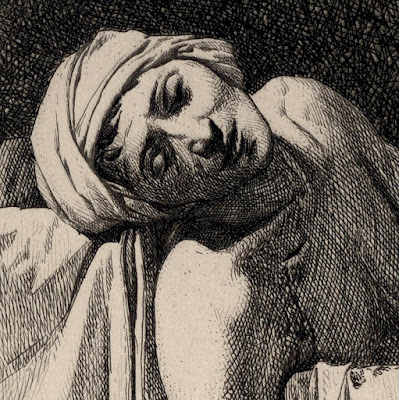 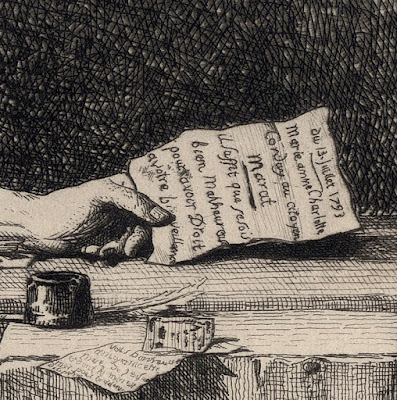 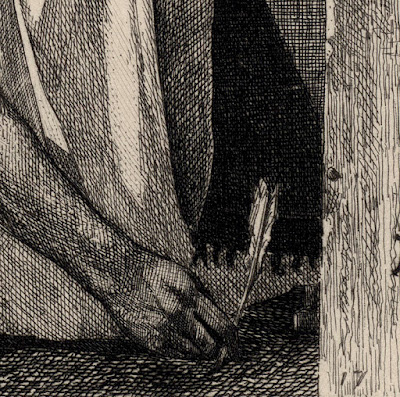 Posted by printsandprinciples at 02:34 No comments: 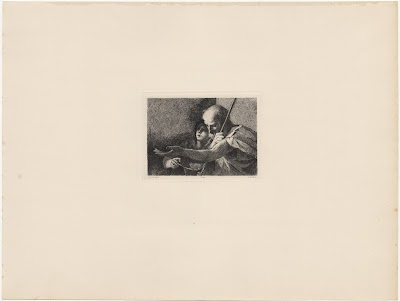 I am selling this delicately executed print for the total cost of AU$60 (currently US$44.81/EUR40.76/GBP34.21 at the time of posting this print) including postage and handling to anywhere in the world.
If you are interested in purchasing this masterly translation of Jacques-Louis David’s painting into etched line, please contact me (oz_jim@printsandprinciples.com) and I will send you a PayPal invoice to make the payment easy. 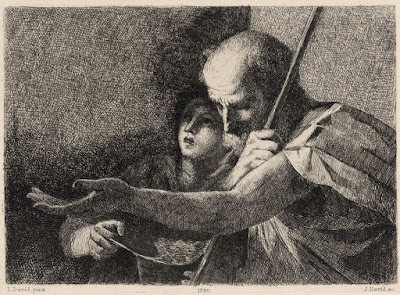 The reason that I originally purchased this small etching was not because the printmaker was the son of the great Neo-Classical painter, Jacques-Louis David, but rather because I admired the graphic translation of the painting, “Bélisaire et l'Enfant” (1780), into line.

Many reproductive printmakers of the nineteenth century had the skill to duplicate the broad tonal effects of a painting into a network of crosshatched lines, but this print is special in that there is great subtlety in portraying light and shade. For instance, compare the variations of tone ranging from the bright light illuminating Bélisaire’s forehead to the softer lights illuminating the figures’ hands. In this variation of tone, each hand is rendered with a slightly different tonal key and within this tonal key (i.e. a very limited range of tones) the artist is still able to portray fine details and tonal gradations. Such mastery is uncommon, especially in a small image. 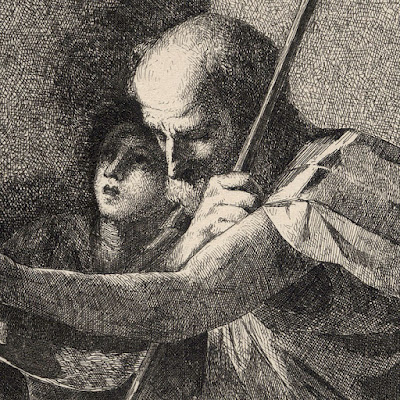 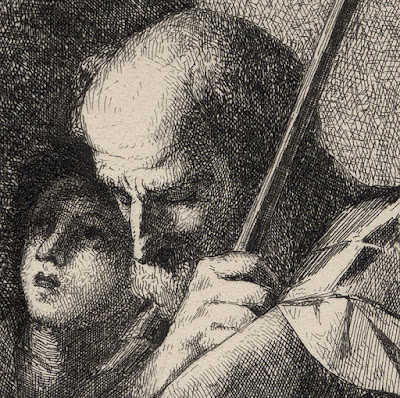 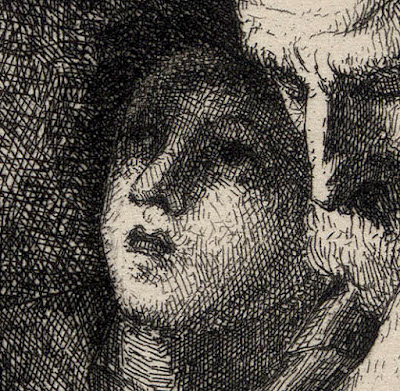 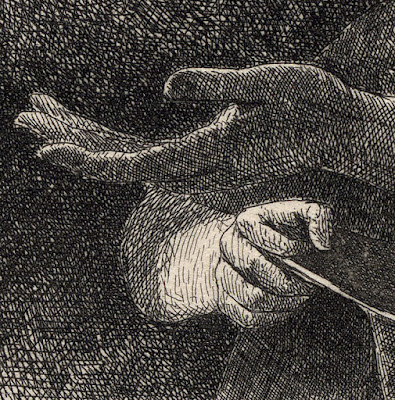 Posted by printsandprinciples at 05:14 No comments: 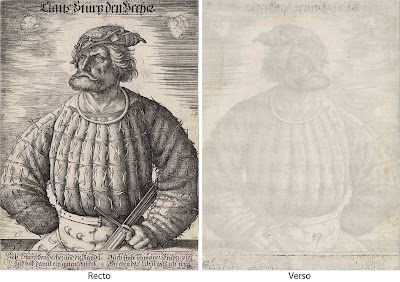 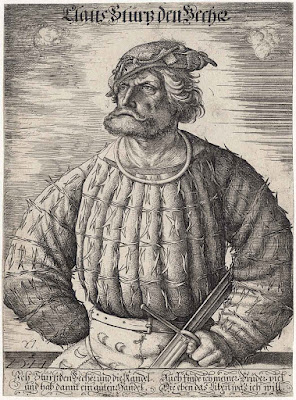 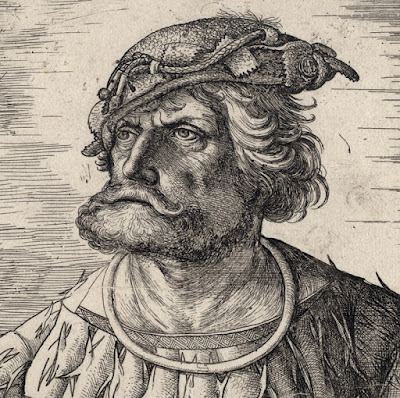 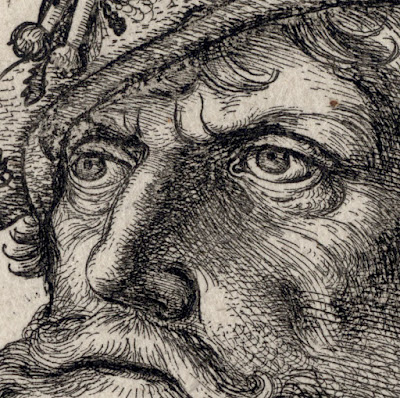 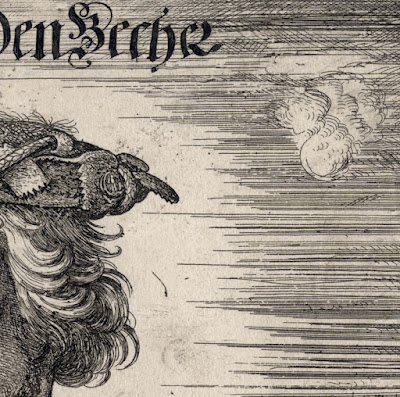 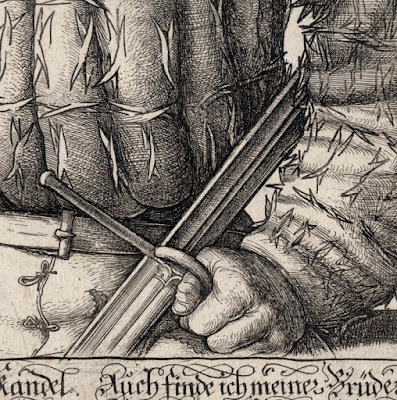 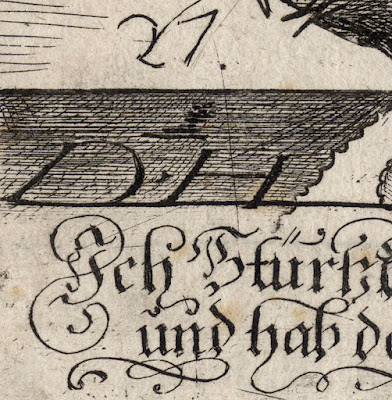 Posted by printsandprinciples at 06:58 No comments: 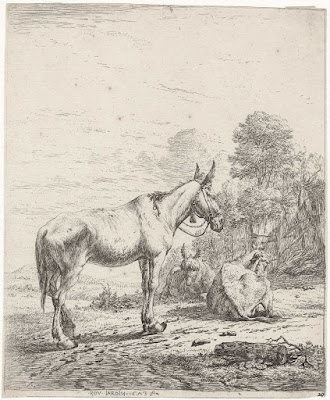