How does an artist make a tree lean towards you?


One of the simplest and most effective ways that an artist can employ to make a tree lean towards you is to use curved contour lines (sometimes described as “bracelet marks”) to suggest that you are under the tree. This means that the contour lines are “U”-shaped like a smile resulting from the artist depicting the underside of the tree limbs. As an example of this device see the detail below from van Sichem II’s 17th century woodcut, John the Baptist Preaching in the Wilderness.


Conversely, an artist may make a tree lean away from you by using contour marks suggesting that you are above the tree; that is, marks that are shaped like an inverted "U"—a sad mouth (see detail from the same woodcut below).


To demonstrate the effectiveness of this principle for portraying advancing and receding forms I recommend the following exercise. First, draw a fundamental tree trunk (see figure 1 below). Next, draw in a very schematic way two limbs on the trunk without showing how they are attached to the trunk (figure 2 below). Finally, experiment with applying the two types of contour lines discussed above to see which makes the limb advance and which makes it recede (i.e. inscribe marks on the underside of one of the limbs and on topside of the other limb) (figure 3 below). 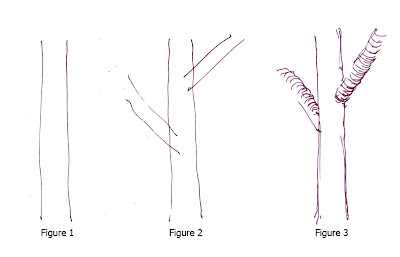 Of course, an artist can make any feature appear to advance or to recede using this principle. For instance, van Sichem has depicted the right arm of the figure on the bottom right of John the Baptist Preaching in the Wilderness gesturing away from us. This representation of a receding arm is achieved by showing contour lines on the top of his arm. By contrast, the same figure’s left arm is shown advancing towards us by contour lines placed under his arm (see details below).

Artists do not always have the flexibility to arrange subject features so that they may be depicted from either above or below. Despite this challenge, artists usually have the inherent gift to visualise form in their mind’s eye so that the appropriate orientation of contour lines can be applied. For example the drawing below features the same cylinder but the orientation of the marks rendering its form changes with the direction the cylinder faces.

Unfortunately the conceptualisation process of marrying the direction that a form faces with the appropriate alignment of contour lines sometimes goes astray. This can be seen in the detail of the foreground figure’s left hand (see the bottom-right detail above). Here van Sichem II leaves the viewer in a conundrum with his use of contour line to establish the location of the bend in the arm at the elbow. 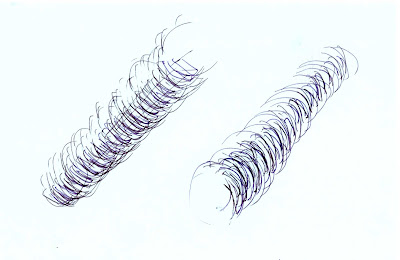 In van Sichem II’s major prints however the true genius of his craft in portraying form is clear as can be seen in the title page print for the Epistle of Saint Paul (see below). Here, van Sichem II's subtle shifts of contour shading are amazing. For example, note how the contouring of the St Paul’s foot projects the foot forwards compared to the contouring of lines on the hilt (handle) of the sword on which St Paul rest his foot. More subtle than these is his contouring of marks around the saint’s head so that his body is shown gently arching forward. Such fine tuning of forms so that they move forward and back in space has earned him the enviable title of “The Dutch Durer.” 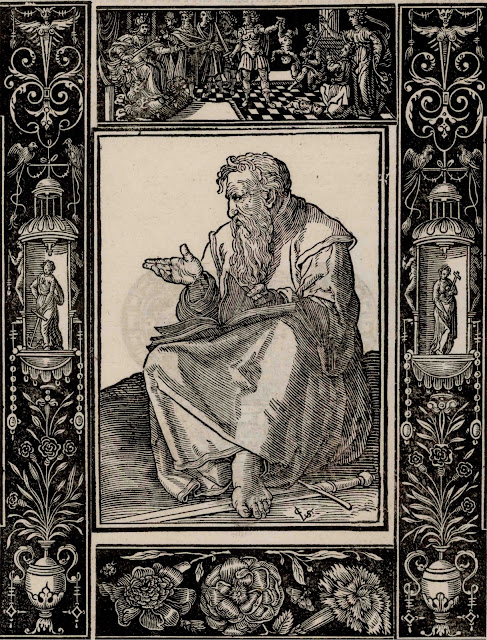 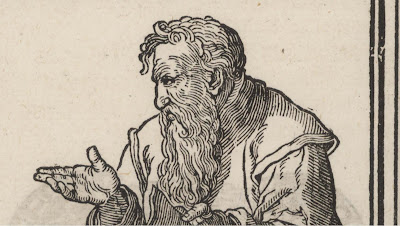 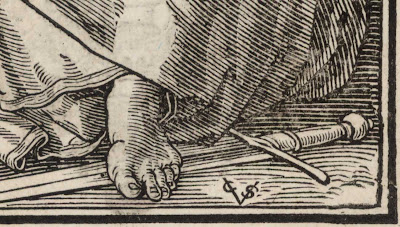