There is a long history of trees symbolising attributes such as strength, resilience and the essence of nature, but how have trees been used metaphorically in images (i.e. used pictorially to “explain” ideas)?

In the last instalment of this discussion I concentrated on artists’ metaphorical use of trees to visually “explain” various feelings of mood experienced in landscape. For the present discussion I will shift the focus and initially address how artists have used trees to articulate, in visual terms, their vision of a spiritual presence emanating from trees; or at least, how artists have portrayed some special trees in a way that communicates a unique tree-essence that makes them noble (i.e. to “stand out” as exemplar trees worthy of respect). Later I will offer personal insights into how artists have imbued trees with human attributes and how even the smallest elements of a tree can communicate significant and complex meanings.

Regarding the use of trees to illustrate the idea of nobility, there is a perfect publication featuring this treatment: Jacob George Strutt’s (1784–1867) Sylva Britannica; Or, Portraits Of Forest Trees Distinguished For Their Antiquity, Magnitude, Or Beauty (1822) featuring etchings of significant/well-known trees in the English and Scottish countryside (a digital version of this book is available for viewing/downloading at https://archive.org/details/sylvabritannicao00strurich [viewed 21 March 2014]) and a copy of this book is available in this blog’s “Books” gallery [see the line of links at the top of the blog]).

One of the more arresting of Strutt’s etchings in Sylva Britannica is The Crawley Elm— (shown below). Strutt viewed elms in general as having the “right” tree attributes for them to complement the nobility of country gentry. In fact, Strutt even goes as far as describing the elm’s attributes as if this type of tree were an actual person of noble standing:
Loving society, yet averse from a crowd, delighting in fresh air, and in room to expand its roots, and affording its aid to all the weaker plants in its vicinity that may seek its support, it presents a pleasing emblem of the class of country gentlemen, whose abodes it is oftenest found to adorn and protect.
(Strutt 1822, p. 59)

As expressed in his insight about their propriety, Strutt’s vision of elms clearly leans more to the poetics of moral virtues rather than to biological science. Moreover, this leaning guides the way that he portrays the elm at . For instance, in the etching, Strutt’s chosen angle-of-view gives an eye-level, front-on, centrally aligned and unimpeded view of the tree (i.e. there are no obstacles obscuring a “bull’s eye” view right to the centre of the composition where the tree is depicted). This formal compositional arrangement denotes the tree as special—in the sense that it is visually significant—while the gap of pictorial space between the viewer and the tree, casts the tree as having social status.

I understand that this curious anointment of social status by a gap in space may, at first, seem far-fetched, but the size of the gap is an important visual device employed by artists for depicting people with social status. It equates with “public space”—as opposed to “intimate space”—that dignitaries leave between common folk and themselves. By extension of the same principle with the elm, the gap casts the tree with an aura of untouchable status. Of course, this reading may never have passed Strutt’s mind as he shows a child climbing the elm’s trunk (see detail above) suggesting that the tree is not an unassailable entity but rather a welcoming regal host.

With regard to Strutt’s vision of presenting this tree as “a pleasing emblem” of country gentry, the portrayed door sealing the entrance to a homely abode within the tree’s trunk is difficult to overlook. After all, the idea that there is a space within the trunk framed by an entrance door must have been a fascinating attraction for the local folk. This feature alone sets it apart from other trees, but the fact that the door is closed also projects a hint of exclusivity in that access to this tree’s heart is removed from common folk.

As may be appropriate for tree of magisterial stature, Strutt not only draws the viewer’s attention to the elm’s height through a comparison of its size with other features surrounding it—especially the diminutive size of the figures and the hay-cart shown in the details below—but also his treatment of the tree itself connotes a commanding presence. Note, for example, in the detail below how Strutt has aligned the marks representing the tree’s foliage so the each stroke helps to lead the eye in spiralling rhythms around the trunk, as if the trunk were a magnetic core holding the space encircling it in check.

The Yew Tree—Ankerwyke, Middlesex (shown below) is another of Strutt’s etchings from Sylva Britannica. Here, the idea of rhythms connoting an aura of presence is taken a stage further. In this print Strutt portrays the yew tree as if it were an explosion in the landscape. Moreover, he uses the contrast of field workers peacefully engaged in their rural tasks set against the upward lines of the trunk and the outward twisting lines of branches. For me, this contrast conveys a sense of the tree’s dynamic energy within the calm of its surroundings.


Also from a personal standpoint, the explosive presence of Strutt’s yew tree is sustained by the shapes of the two trees shown to the left side of it. By this I mean that the structure of the horizontally layered foliage of the tree on the far-left supports the idea of lateral forces emanating from the yew, while the tree in the distance is like an arrow-head drawing attention to the explosive arrangement of the yew’s upward projecting rhythms (see diagram below). 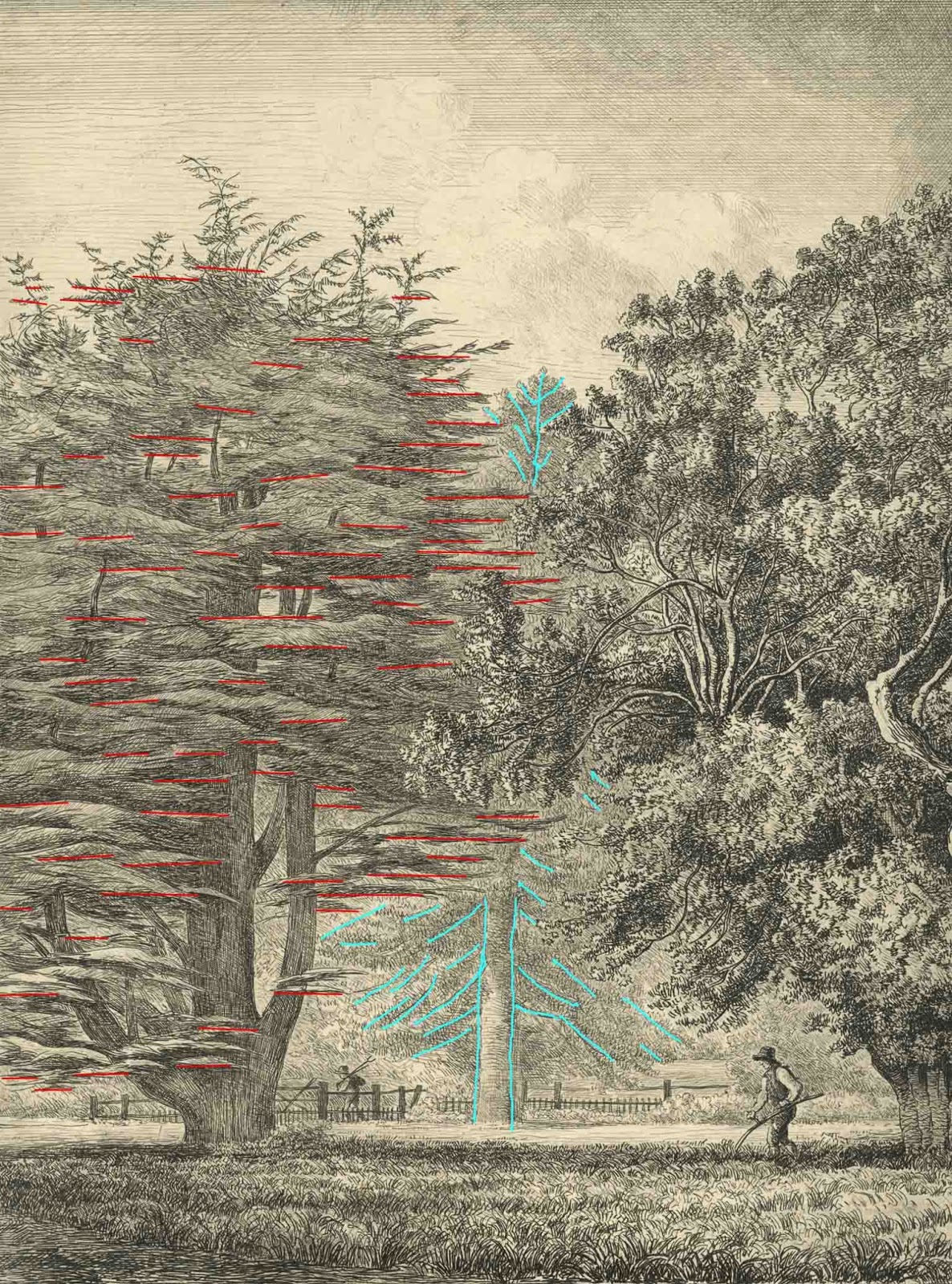 Strutt may not have viewed his treatment of the yew in the way that I have proposed, but then again his vision of trees is underpinned by his personal experience and associations of English trees’ virtues:
what can afford more delightful contrast in landscape than the giant strength of the Oak, with the flexile elegance of the ash; the stately tranquillity of the elm, with the tremulous lightness of the poplar; the bright and varied foliage of the beech, or sycamore, with the funereal majesty of the cedar or the yew; all differing in form and character, as in colour .… (Strutt 1822, pp. 5–6)

Let me now move to how artists have imbued trees with human features and attributes to communicate metaphorical meanings. In terms of unambiguous use of trees morphed with human anatomy, some artists have been very explicit. For example, Arthur Rackham’s (1867–1939) beautiful illustrations often feature anthropomorphised trees, such as The Hawthorne Tree (1922) and Suddenly the branches twined round her and turned into two arms (1917) (both of these ink and watercolour illustrations may be seen in the post, Paper Trees [24 March 2011] from the blog Mud 'n Art: https://stevemessam.wordpress.com/2011/03/24/paper-trees/) and The Monkey Tree (shown below) by W.H.J. Boot (1848–1918) who also wrote the book, Trees, and how to paint them in water-colours (1883) (this book may be viewed at: https://archive.org/stream/treesandhowtopa00bootgoog#page/n4/mode/2up  [viewed 28 March 2104]). Perhaps the most memorable visualisation of trees as people is the famous scene from Peter Jackson’s Lord of the Rings: The Two Towers (2002) featuring the character, Treebeard, and middle-earth forest folk, the Ents (my apologies to J.R.R. Tolkien if my description of his characters is imprecise) as shown in the clip below.

Lord of the Rings: The —Treebeard Rage Scene

Regarding artists’ use of anthropomorphised trees, I was given a very interesting insight during a chat this afternoon with my gardener—an affectionate name for John who is married to Isabelle who I affectionately call “my cook” mentioned in an earlier post. What the gardener revealed to me is that artists avoid showing the tops of trees when they are morphed into tree-people, as tops of trees don’t carry expressive meaning and they make the tree too large for practical purposes. This comment arose from his disappointment on first seeing the Ents in the clip shown above as his vision of them, based on reading the book, is that they should have leafy tops like all the other trees in the forest.

I suspect that the gardener may be correct, but, as shown by Strutt’s portraits of trees, metaphorical meanings may be projected even with leafy topped trees.  One print that illustrates how important the top of a tree can be is Eugène Bléry’s (1805–87) large etching, Le Vieux Chêne à la Figure Assise (shown below).

To be precise, however, the expressive potential of the large oak tree’s top portrayed in the print needs the rest of the tree and its surroundings to project a negotiable meaning. For instance, my reading of the tree and the figure resting at its base is that the relationship between them is a metaphor for a transition of mindset from temporal concerns to spiritual transcendence (i.e. a change from thinking about everyday issues, such as herding cattle as depicted in the distance, to a state of reverie and dreamy disengagement). To arrive at such a reading is all about perceiving correlations between different parts of the composition.

As an example of my own process of correlation, I first noticed the oak tree and then the figure resting among its roots. This initial set of observed features is not, of course, sufficient to construct the metaphor about a transition in mindset. The magical ingredient that prompted me to conceive such a meaning happened next when I noticed a figure herding cattle. At this point my mind conceived a relationship between the two figures—the one in the distance and the figure under the tree: they are both herdsmen as they are both holding a staff and wore similar clothes. I then concocted a narrative based on the further away herdsman looking over at the resting one: the further away herdsman is displeased with the passivity of the resting one. This mini narrative may be simple conjecture but it led to the next thought: what could the resting herdsman be thinking about? And another thought: what is the further away herdsman thinking that the resting herdsman is thinking about. At this juncture of reflexive thinking, the framing of the metaphor began to materialise. The oak tree, in terms of its structure and upward spiralling rhythm of limbs culminating in the single dead branch “pointing” skywards at the top, was perceived by me as an analogue for a change in mindset rather than being simply a tree.

No doubt other viewers may have different reading of this print but my intention is not to argue a case for how the image should be interpreted but rather that small details make a big difference in projecting meaning.

To bring this discussion to a close, I wish to draw attention to another very large and rare etching, The Gipsies (shown below), executed by one of the kings of landscape imagery, Thomas Gainsborough (1727–88). (Note that the term “Gipsy,” and the more common spelling “Gypsy,” for Romani people has unfortunate connotations and can been used in a derogatory way and so I prefer to use the term “traveller” even though this term encompasses a much broader group of people.)

What I find fascinating about this print is Gainborough’s use of a single dead branch jutting out from an otherwise healthy oak tree to give metaphorical meaning to a group of travellers and their animals gathered beneath. Although other viewers may see the tree and its dead limb differently, the meaning that I perceive is that the travellers are alienated from a nearby town symbolised by a stone tower depicted in the distance.

In the next and final instalment concerning trees as metaphors, I will discuss the seldom explored but fascinating world of emblem prints.
Posted by printsandprinciples at 19:40