Pietro Monaco’s etching (with engraving) of Adam and Eve 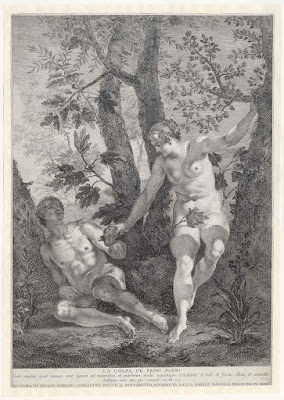 The British Museum offers the following description of this print:
“Adam and Eve, after Tintoretto; Eve, standing on the right, hand the apple to Adam, who sits on the left”. The curator of the BM also offers the following information: “Print described in 'Immagini dal Tintoretto', Rome, 1982. cat. No.67, page 74; and 'Tintoretto e suoi incisori', Milan, 1994, cat. No.88, pages 86-87.” (http://www.britishmuseum.org/research/collection_online/collection_object_details.aspx?objectId=3224322&partId=1&searchText=Pietro+Monaco+&page=2)

Condition: an extremely rare, large and marvellously crisp impression in superb condition for its age (i.e. there are no stains, holes, abrasions or foxing). Nevertheless, there is a centre-fold tear that has been stabilised and made virtually invisible by the lining of the print on a conservator’s washi paper support sheet and there are pencil numbers from a former collector on the lower corners (recto). The sheet has been trimmed on or slightly within the platemarks.

I am selling this very impressive original etching by an 18th century master printmaker for AU$259 in total (currently US$197.32/EUR176.02/GBP152.34 at the time of posting this listing) including postage and handling to anywhere in the world. If you are interested in purchasing this masterwork that is seldom seen on the market, please contact me (oz_jim@printsandprinciples.com) and I will send you a PayPal invoice to make the payment easy. 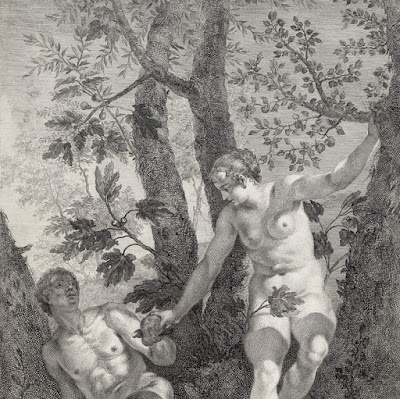 This is a rare print and even rarer regarding its superb condition for its large size. Such grand prints are inevitably soiled, stained, abraded, worm-holed and show significant signs of handling, especially considering that it was executed nearly 300 years ago.

From a technical standpoint, Monaco's print showcases the subtle mastery of 18th century engravers in Venice. For example, note how Monaco is able to describe using only line how the trees behind Adam and Eve fade into the light. Such technical virtuosity to create a tonal transition of this delicacy is only achieved by the gentlest of changes to pressure on the engraver’s burin.

What I love about this print is the sparkle of dappled light falling over the figures. Although Monaco may have been translating the tones of Tintoretto’s painting in this print, to my eyes this captured sparkle is all about the bouncing light of Venice—a light that both Monaco and Tintoretto were very familiar. 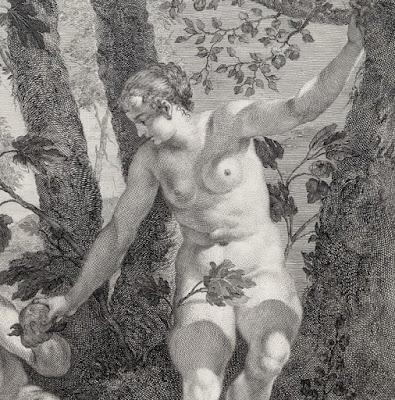 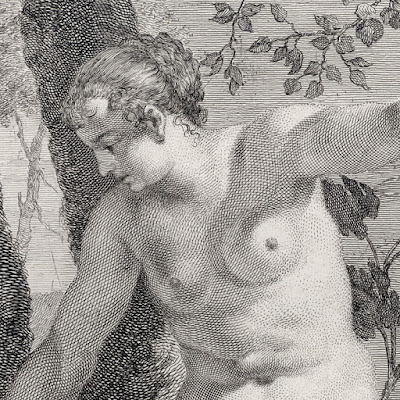 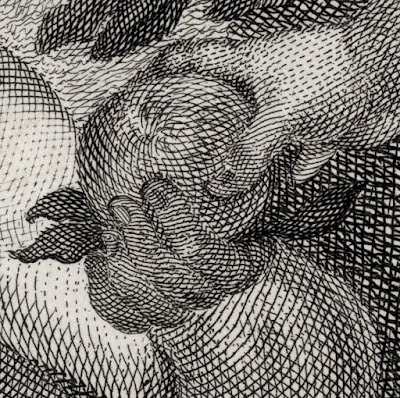 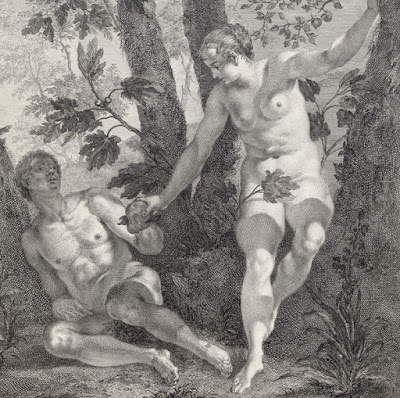 Posted by printsandprinciples at 22:52