Aegidius Sadeler’s engraving, “Three Hunters at a River in a Forest”, 1609 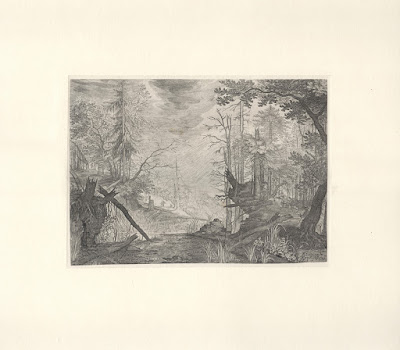 “Three Hunters at a River in a Forest” (Rijksmuseum title) or “A Forest with a Glade in the Background” (TIB title), 1609, after a drawing by Roelant Savery (1576–1639) in the Fondation Custodia, Paris (inv. 2436). This is the first plate from the series of six plates, “Mountain Landscapes in Tyrol.” Published by Aegidius Sadeler (as inscribed on the plate) and later published by Marco Sadeler (fl1660s) in Prague.

Engraving and etching on laid paper trimmed slightly within the platemark and re-margined on a support sheet.
Size: (re-margined support sheet) 36.8 x 42.1 cm; (sheet) 19 x 26.2 cm.
Inscribed on plate within the image borderline: "R: Sauery In. / Æg: S. ex. 1609”
State i (of ii) Lifetime impression with publication details of Aegidius Sadeler before the rework and the addition of the publication details of Marco Sadeler in the second state.

The Rijksmuseum offers the following description of this print:
“Forest landscape with fallen trees at a river. Right on the shore three hunters and a dog.” (http://hdl.handle.net/10934/RM0001.COLLECT.167923)

Condition: silvery impression trimmed within the platemark in excellent condition (i.e. there are no tears, holes, folds, abrasions, stains or foxing). The sheet has been re-margined with an archival support sheet.

I am selling this bleak view of a broken landscape—arguably a bog— by one of the most famous of the old masters for AU$343 (currently US$272.01/EUR218.97/GBP193.92 at the time of this listing). Postage for this print is extra and will be the actual/true cost.

If you are interested in acquiring this delicately luminous print exemplifying the peculiarly 17th century notion of landscape with dead and regenerating trees among other attributes seen from a high viewpoint—the Weltlandschaft (world landscape)— please contact me (oz_jim@printsandprinciples.com) and I will send you a PayPal invoice to make the payment easy. 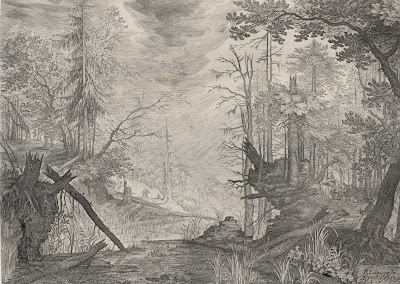 When initially framing my thoughts about this print for a discussion, I had thought that I was going to offer a personal proposal of how the notions of “World Landscape”—an early philosophical way of looking at the landscape (see https://en.wikipedia.org/wiki/World_landscape)—and “Lady Landscape” —a not so politically correct mindset in which the landscape’s natural forces are perceived as femininely evil with a facade of beauty (see Udo Becker 2000, “The Continuum Encyclopedia of Symbols”, Continuum, p. 169)—but instead I need to report a MURDER.

I remember years ago seeing the movie, “Blowup” (1966) directed by Michelangelo Antonioni in which a fashion photographer who had been taking shots in a park thought that he had inadvertently captured a murder in the background of one of his photos. Well … the same feeling of finding a murder captured in an image happened when I was zooming in on details of this print.

To be honest, before I started making close-ups, I had only seen the couple of figures standing in the clearing in the far distance. But then I found the two chaps—“shooters”— and their dog concealed in the trees on the escarpment on the right. On even closer examination I then found that their hideous intent was being witnessed by another man walking his dog. The more I looked into the details, more and more figures “popped” up into view. In total I have found seven figures: two on the silhouette edge of the hillside on the far left; the two in the distant clearing; the two bush loving killers on the cliff top and the witness to their activities with his curly tailed dog. 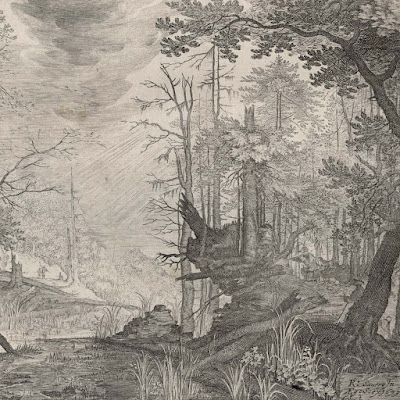 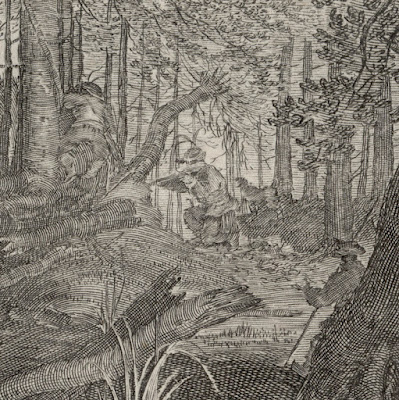 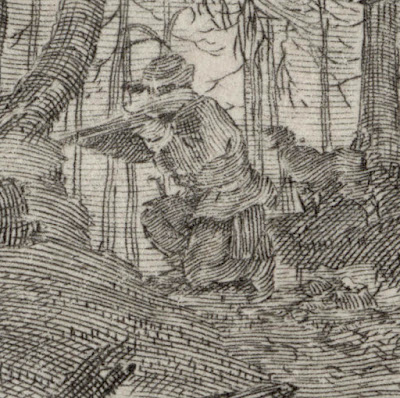 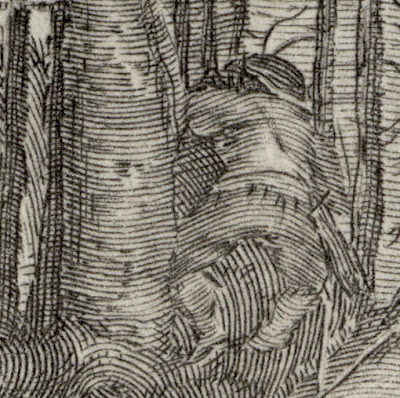 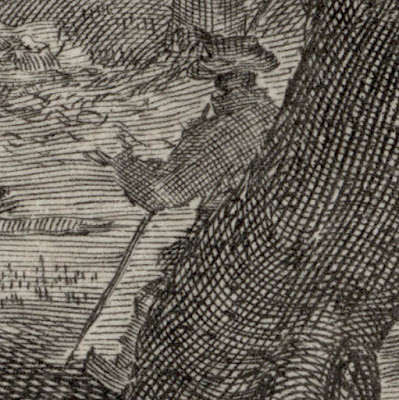 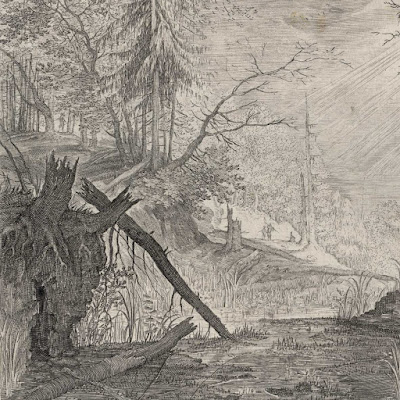 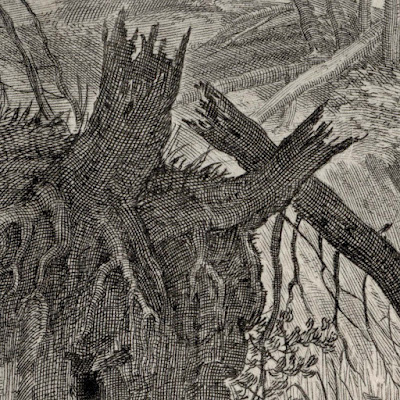 Posted by printsandprinciples at 05:55