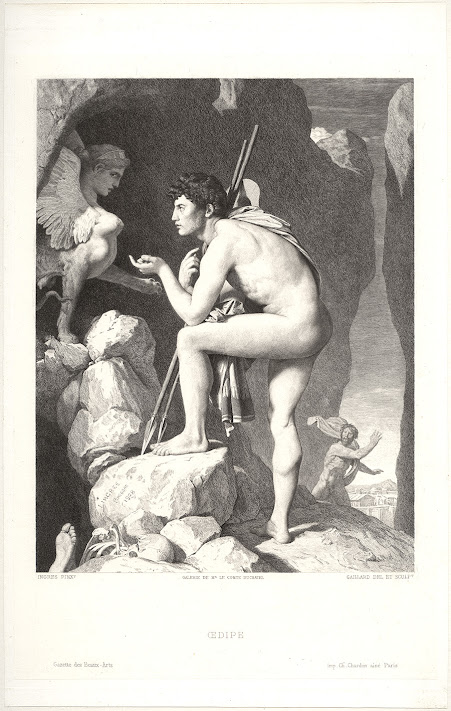 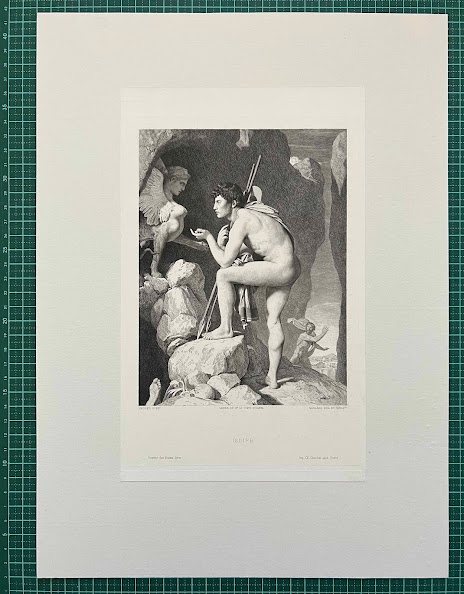 Engraving on chine collé laid on wove paper with small margins around the chine collé and backed with a support sheet providing larger margins.

Inscribed in plate on the rock upon which Oedipus rests his left foot: "I INGRES/ PINGEBAT,/ 1808".

See also the description of this print held by the British Museum: https://www.britishmuseum.org/collection/object/P_1877-1013-279.

For those wondering about the portrayed scene, the mysterious mythological creature called “the Sphinx”—an interesting amalgam of woman and lion—was sent by Zeus to kill Theban folk who were unable to answer a riddle posed by the creature. In this scene, the Sphinx is shown in state of unhappy apprehension regarding what to “do” about Oedipus who has just provided the correct answer to the riddle: "What goes on four feet in the morning, two feet at noon, and three feet in the evening?" What we don’t see in this illustration is that the Sphinx resorts to killing herself as a way forward in resolving what to “do”, a plague kills the folk in Thebes and Oedipus fulfils his ultimate mission in life of killing his father and marrying his mother. (Some stories are hard to forget and I wonder about the daily lives of those who concocted such a story!)

From a technical standpoint, this is a masterwork of engraving. The print is relatively small—my outstretched hand can almost cover it—but the microscopic fineness of the lines used to render the details is amazing. I know that there are still master engravers working with comparable skills, discipline and patience, but in terms of achieving such velvety richness in the dark areas and delicately modelled lights, I see Gaillard as being in a league of his own.

By the way, if there are readers who are wondering what the answer to the Sphinx’s riddle might be, the answer is so obvious: "Man, for as a babe he is four-footed, as an adult he is two-footed, and as an old man he gets a third support, a cane."

Condition: a strong and near faultless impression, trimmed with a small margin around the image borderline/chine collé and laid onto a sheet of archival (millennium quality) washi paper that provides larger margins. The sheet is in a near pristine (museum quality) condition with no tears, holes, folds, abrasions, stains, foxing or signs of handling.

I am selling this jewel-like masterwork of engraving for AU$233 in total (currently US$164.92/EUR143.94/GBP121.95 at the time of posting this listing) including postage and handling to anywhere in the world, but not (of course) any import duties/taxes imposed by some countries.

If you are interested in purchasing this small miracle of fine engraving—I need to advise that the linework rendering each detail in this sumptuously rich interpretation of Ingres’ painting is almost microscopic—please contact me (oz_jim@printsandprinciples.com) and I will send you a PayPal invoice to make the payment easy. 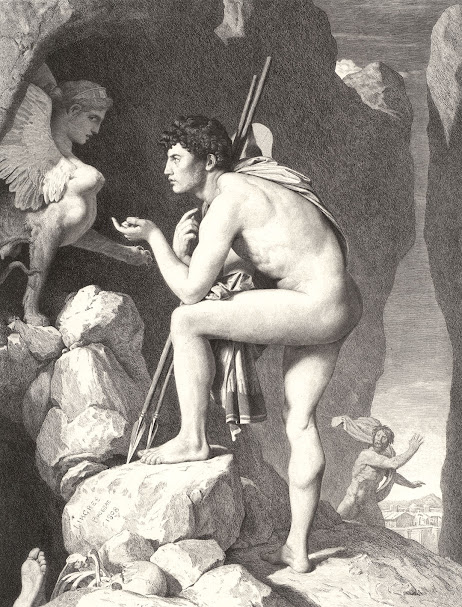 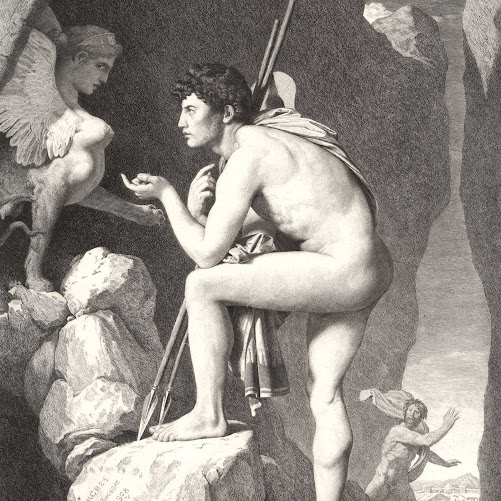 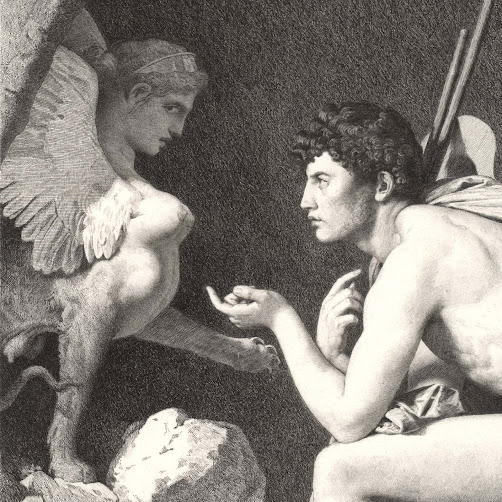 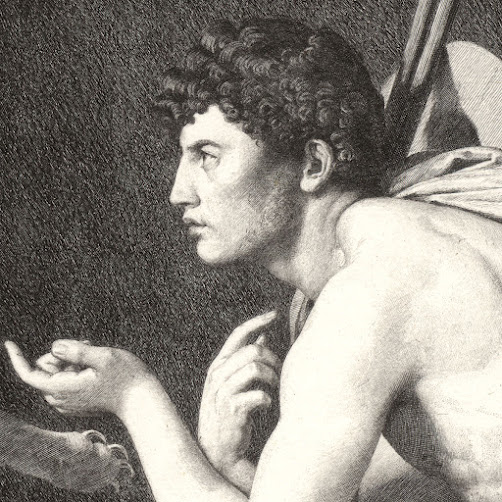 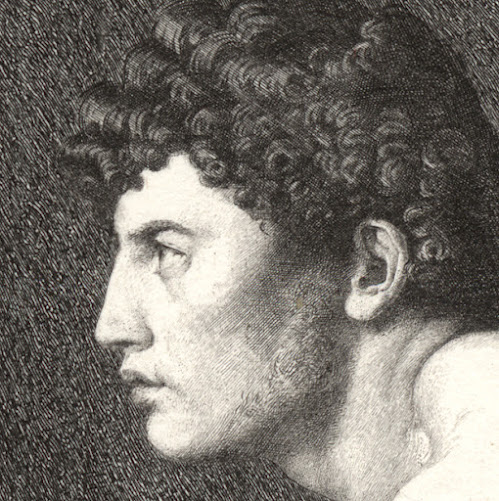 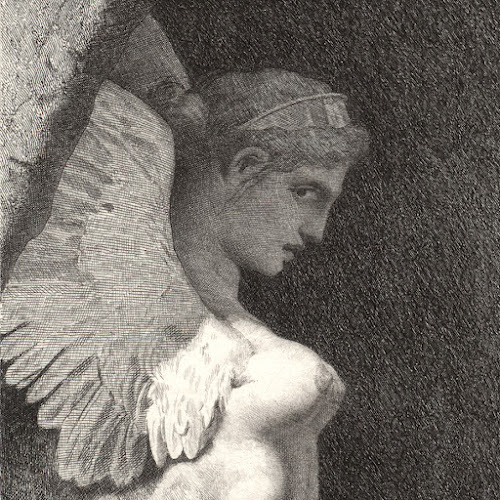 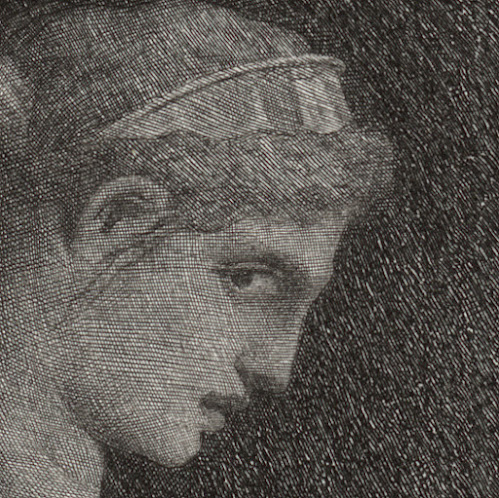 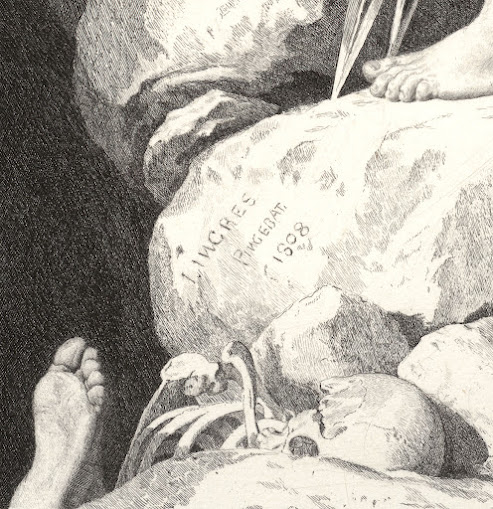 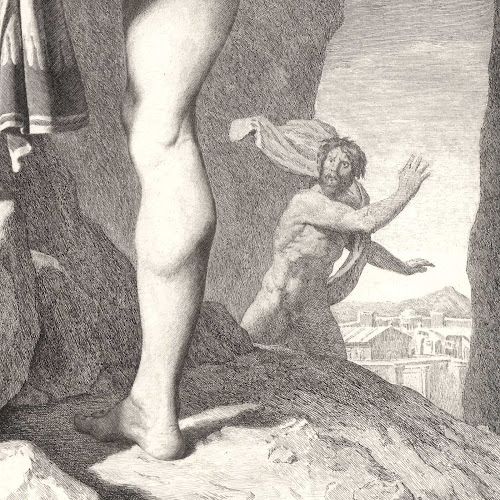 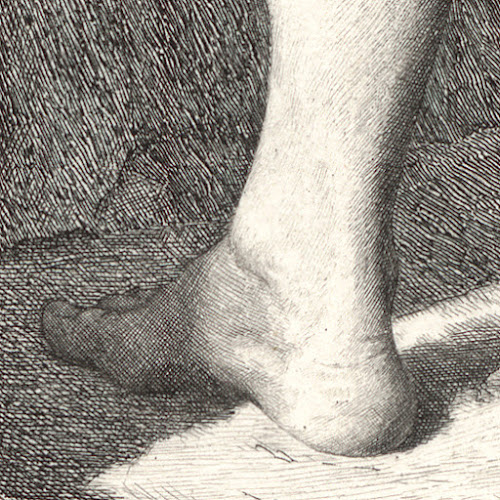 Posted by printsandprinciples at 01:43