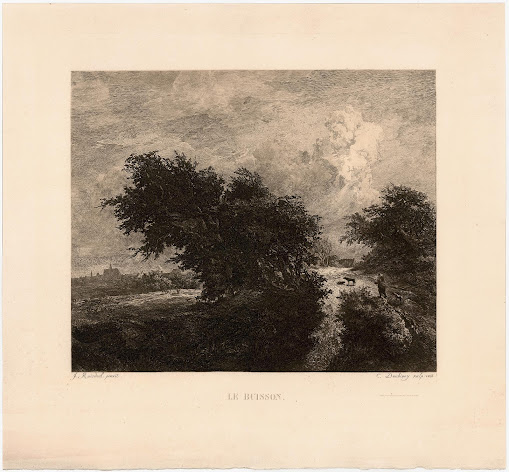 Blind-stamped on lower margin with the seal of “Chalcographie du Louvre, Musées Nationaux”.

State v (of v) with the addition of the title and publication details of the Chalcographie.

Michel Melot (1978) offers the following insights about the background events in Daubigny’s life leading up to the execution of this plate:

“The Comte de Nieuwerkerke, Director-General of Museums, assigned Daubigny to translate the “Thicket” of Ruysdael, which no engraver had as yet taken on. Daubigny acquitted himself of this delicate task very honourably. He rendered the masterpiece of the Master of Haarlem not as a clever manipulator of cross-hatchings but as a painter interpreting another painter and penetrating directly into the feeling of the model. He attained the power of effect of the original and at the same time expressed its austere melancholy. Following the example of the masters of the great periods of engraving, Daubigny executed his plate with a great simplicity of means. He made use of scarcely anything more than etching and drypoint. He made little or no use of the burin. He rigorously ruled out the use of roulettes and other mechanical means. He made up for them by energetic and repeated [acid] baths; his work owes its frankness and vigour to those audacities in acid-biting, but the drawing was to some extent made heavier, and the plate lost by this a little of the spirit and finesse that distinguish the ‘first state’ of pure etching so sought after by print lovers” (p. 278; see also the original text written that Melot translated written by Comte de Nieuwerkerke’s secretary, Frédéric Henriet, in 1875 in “C. Daubigny et son oeuvre gravé, eaux fortes et bois inédits”, Paris, A. Lévy, pp. 60–61: https://archive.org/details/cdaubignyetsonu00henrgoog/page/n80/mode/2up).

The Metropolitan Museum of Art offers a description of this print: https://www.metmuseum.org/art/collection/search/336989.

Condition: a richly inked and well-printed impression with generous margins as published in near pristine condition.

I am selling this large and richly worked etching executed by one of the luminaries of the Barbizon School after a painting by one of the major landscape artists of the 1600s, for the total cost of AU$289 (currently US$199.21/EUR199.71/GBP169.82 at the time of this listing) including postage and handling to anywhere in the world, but not (of course) any import duties/taxes imposed by some countries.

If you are interested in superb etching which is one of Daubigny’s major commissioned works by the Louvre—interestingly, the print was commissioned by the director of the Louvre at a time when artists’ reproductive rights were being challenged by a proposed law in 1841 designed to prevent “the government of conducting itself like an owner and publisher with money taken from the Civil List” (see Frédéric Henriet [1875] p. 60)—please contact me (oz_jim@printsandprinciples.com) and I will send you a PayPal invoice to make the payment easy. 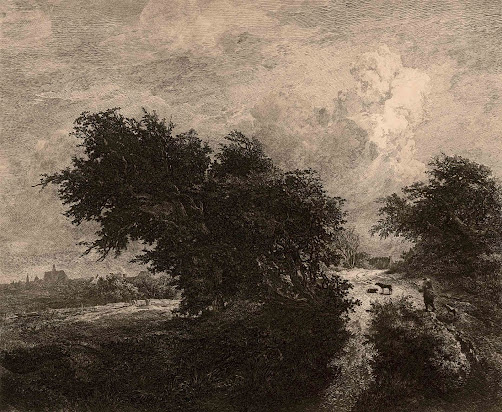 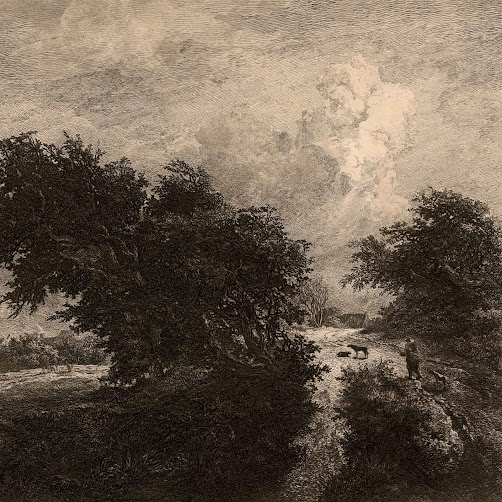 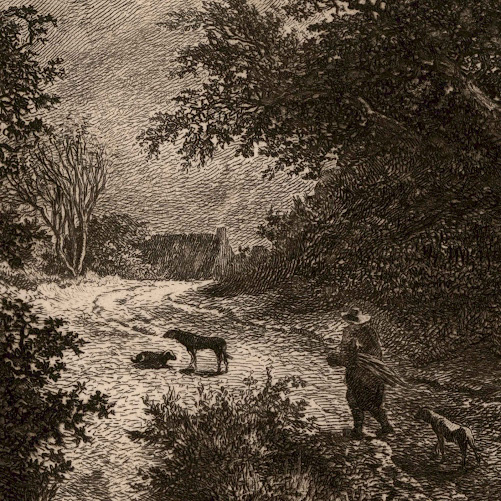 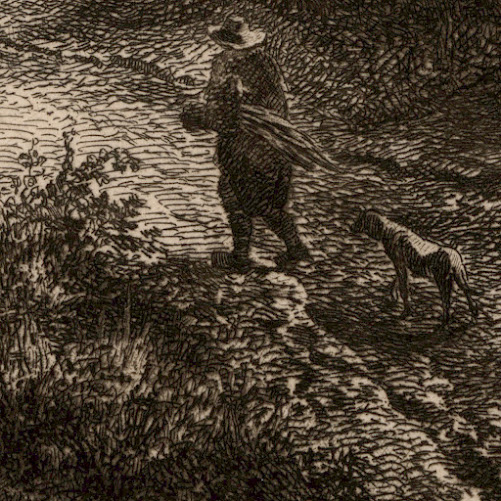 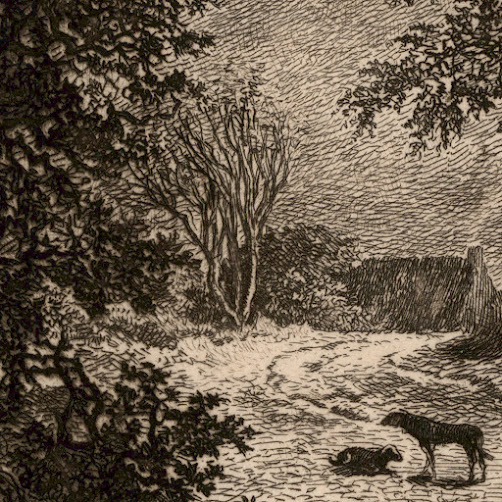 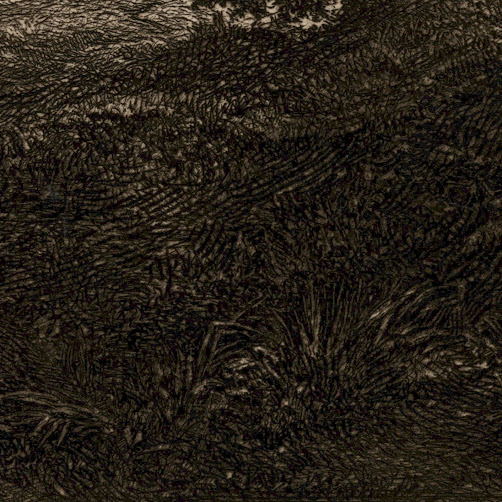 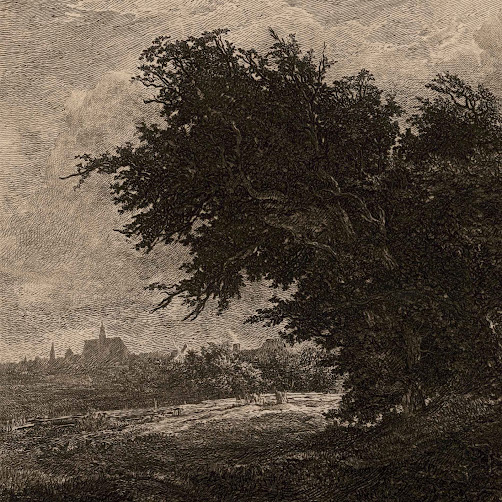 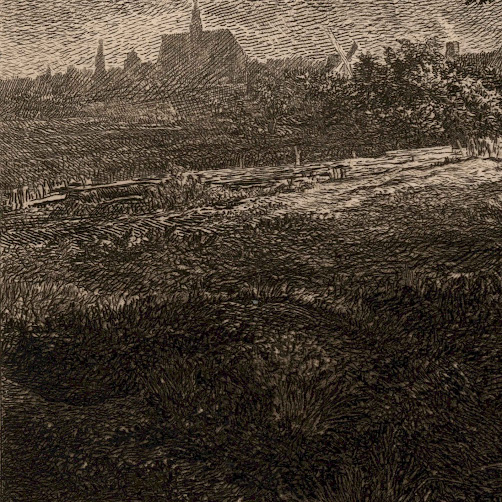 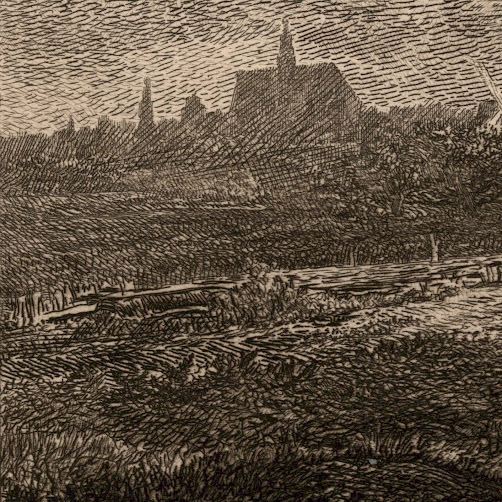