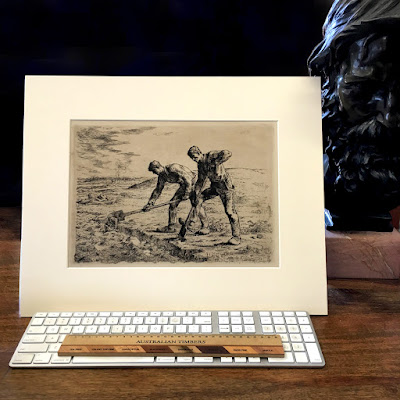 Jean-François Millet (1814–75)
“Les Bêcheurs” [The Diggers], c.1855–6, printed by Auguste Delâtre (1822–1907).
Etching and aquatint in brown-black ink on fine buff-coloured tissue-thin laid paper attached to a support sheet.
Size: (mount) 39.5 X 49.5 cm, (plate) 23.5 X 33.6 cm, (image) 22.5 X 32 cm. (Note that the print is sealed within its mount and so I cannot verify the size of the sheet, but the previous owner advises that it is 33 X 43.2 cm.)
Inscribed (lower right) "Paris Imp. par Aug. Delâtre Rue St Jacque 171"
State iv (of iv)
See description of this print at the British Museum: http://www.britishmuseum.org/research/collection_online/collection_object_details.aspx?objectId=1355002&partId=1&searchText=Jean+Fran%25u00e7ois+Millet+&page=1
Delteil 13.IV
Condition: crisp, well-printed impression. Although the print is currently sealed within its mount and so I cannot verify the following information, the previous owner advises that a conservator has deacidfied the tissue thin sheet of the print but left it attached to its support sheet. I am also advised that the print is attached to a new backing mat with three pieces of mounting tape.

I am selling this original, extremely rare and historically important icon of 19th century French printmaking for AU$2018 (currently US$1466.70/EUR1297.05/GBP1021.45 at the time of posting this print) including postage and handling to anywhere in the world.
If you are interested in purchasing this major print at an exceptionally low price, please contact me (oz_jim@printsandprinciples.com) and I will send you a PayPal invoice to make the payment easy. 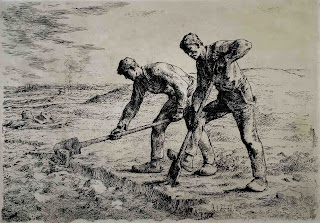 This etching, "The Diggers", and "The Gleaners" are Millet's most famous prints and arguably two of the iconic images from the 19th century. Rather than offer an explanation for their fame—there is already so much written about their historical importance—I've decided to give a few insights into the history behind the printing of the plates.

Millet's motivation to create this print (and the four preceding it including "The Gleaners") was driven by his close friend and biographer of the Barbizon painters, Alfred Sensier. Sensier proposed to Millet that there was a lucrative market to be found if the artist were to create formally resolved etchings. Moreover, the likely sales of well-considered and finished prints would help to establish Millet's reputation. Prompted by Sensier's advice, Millet commenced work on a small group of five prints intended to satisfy the market during the winter of 1855-56.

The publisher for these carefully considered prints was Auguste Delâtre—the major printer/publisher in Paris at the time. Sensier, however, had misgivings about him and he withheld giving Delâtre Millet’s etched plates until the scheduled time for printing so that he could keep an eye on the number of impressions pulled from the plates. This withholding of the plates was a painful affair and in Sensier’s letter (dated Feb. 8, 1858) to Millet, Sensier explained that he had run out of excuses why he hadn't entrusted the plates to Delâtre and lamented that he will "more or less have to put my trust in God ... [having] exhausted all the ways of holding onto them". Sensier's mistrust of Delâtre was not completely unfounded as Delâtre requested additional proofs for his clients. Interestingly, Millet relented to Delâtre’s request and advised Sensier: "I would have it on my conscience if I hindered the good fortune of Delâtre, if all that is needed to help him ... is the few proofs on old paper he spoke with you about. Let him take them and do with them as he wants."

Beyond the edition printed by Delâtre (who printed this impression) the plates were also editioned by two other printers. The most famous of these was the legendary, Charles Meryon in 1860. When Meryon—who I value as one of the most important printmakers of 19th century—was entrusted to the role of printing Millet’s plates, Sensier described Meyron as “a man who is serious and honest to the very highest degree and who prints his proofs very well.” More fascinating for me, Sensier also wrote to Millet about Meyron as “someone with his head forever in the clouds (un verre fumeux), a fakir who lives on tea and currants, who will require nothing more than a smile from your Excellency and a proof of your ‘Diggers’ with these words from your hand: ‘Millet to Meryon.’” (Michel Melot [1978] “Graphic Art of the Pre-Impressionists”, Harry N Abrams, New York, p. 289) 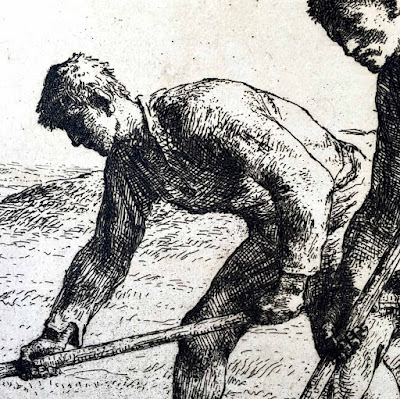 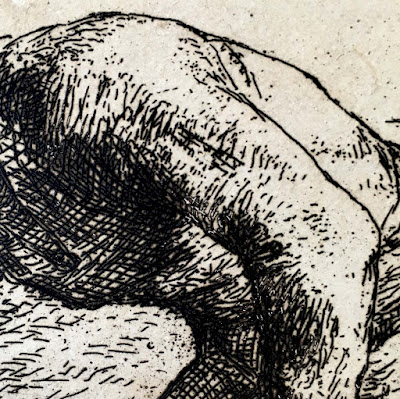 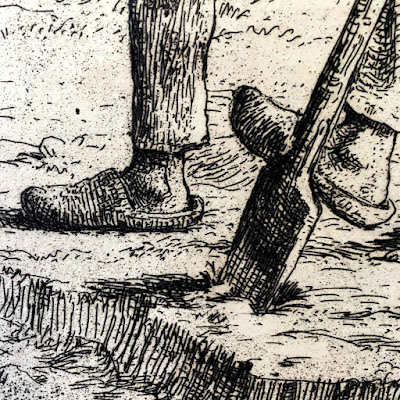 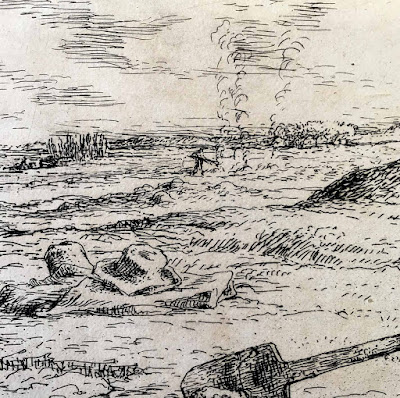 Posted by printsandprinciples at 16:21