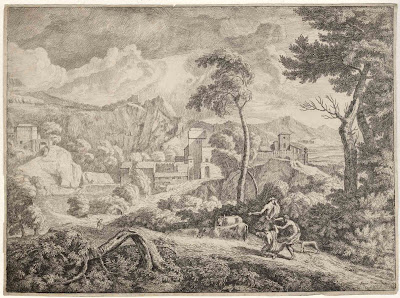 Jan Gottlieb Glauber (aka Johannes Gottlieb Glauber; Myrtill) (1656–1703)
“A Tree Struck by Lightning” (BM title) or “Landscape with a Tree Broken by a Strong Wind” (TIB title), c.1685, after Gaspard Dughet (1615–75). (Note: Dughet is often called Gaspard Poussin as he is Nicholas Poussin’s brother-in-law and was very close to Nicholas.)

Etching on laid paper, trimmed along or slightly within the platemark.
Size: (sheet) 29 x 39.3 cm: (image borderline) 28.3 x 38.6 cm
Inscribed in the plate at the lower-right corner (hardly discernible): "Gaspar Poussin Pinxit Romae / J. G. G. f."
State iii (of iii) A copy of the second state before the added cross-hatching in the sky is available at: https://fineartamerica.com/featured/three-shepherds-in-a-storm-johannes-gottlieb-glauber-johannes-gottlieb-glauber.html

The British Museum offers the following description of this print:
“Landscape with two shepherds and a shepherdess with a dog and a herd of cattle in the lower right corner, their clothes blowing in the wind, a tree struck by lightning to the left, wind-swept trees to the left, a town and mountains in the background; soiled plate-edges; added cross-etchings in the sky and in the foreground. Etching” (http://www.britishmuseum.org/research/collection_online/collection_object_details.aspx?objectId=1668551&partId=1&searchText=glauber+shepherds+in+a+storm&page=1)

Condition: rich and crisp impression trimmed along the platemark with the centre fold (as published?). The sheet is in good condition with light age toning and a small tear (about 1 cm) on the lower edge. There are traces of mounting (verso).

I am selling this beautiful and rare etching for the total cost of AU$244 (currently US$182.67/EUR167.85/GBP141.13 at the time of posting this listing) including postage and handling to anywhere in the world.
If you are interested in purchasing this highly sought after print, please contact me (oz_jim@printsandprinciples.com) and I will send you a PayPal invoice to make the payment easy. 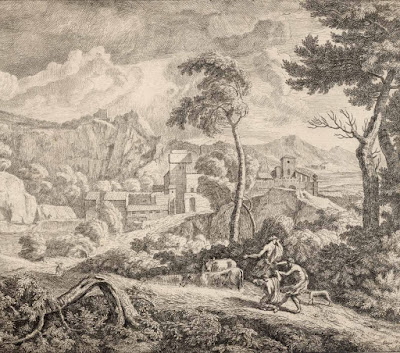 My usual way of looking at prints by Glauber is to admire the way that he gives his images the sparkle of light. This scene may have been created to show effects of a storm with regard to the fallen tree in the foreground which the British Museum describes as having been struck by lightning or the Bartsch’s catalogue raisonné advises is “broken by a strong wind”, but, for me, the real attraction in this landscape is the glowing light that bathes the scene. Note, for instance, that Gauber has employed cross-hatching where the lines almost intersect at ninety degrees and it is this extreme contrast of angles that gives the scene its luminosity.

Glauber’s approach is unusual for the time in which the print was executed as the angle of cross-hatching was more commonly applied at close angles—so close, in fact, that moiré effects often occurred. Indeed, the effect of the line work is similar to the broken strokes of the Impressionists. For example, if I may draw attention to the treatment of light and shade rendering the bent tree on the right with a patch of light illuminating the bend in its truck, I find great interest in the way that Glauber codifies his strokes so that light is represented with vertical strokes while shadow is represented with horizontal strokes. I find details like this fascinating and wish that a scholarly article would be written about Glauber that addresses his currently hidden importance as an artist of light. 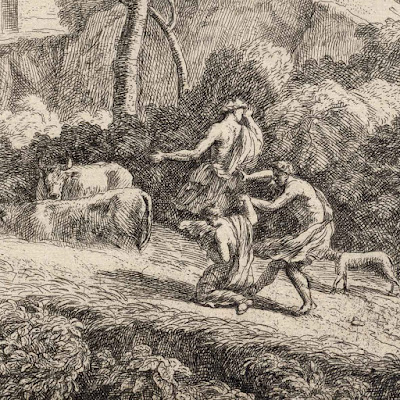 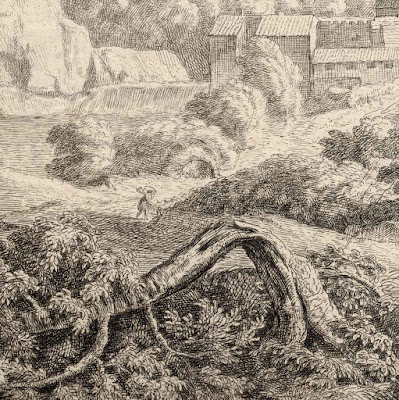 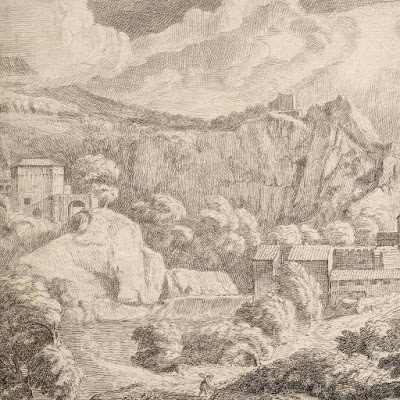 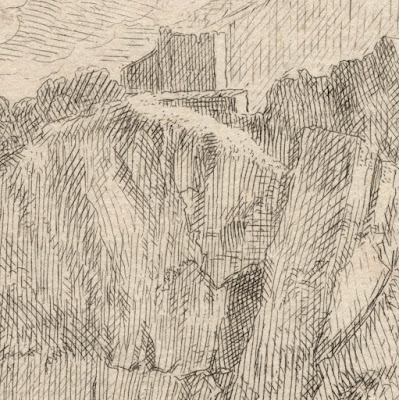 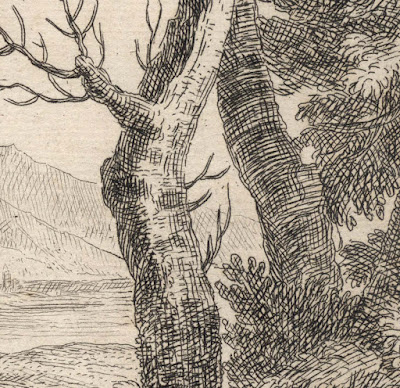 Posted by printsandprinciples at 06:28