Engraving from the workshop of Goltzius, “Battus Changed into Stone”, 1590 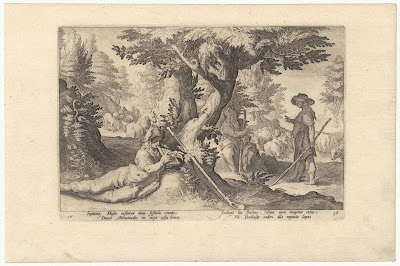 The curator of the British Museum offers the following insight into this series advising that they were "originally published in three sets (of respectively twenty, twenty and twelve plates), each separately numbered and later numbered consecutively (which explains the double numbering on the plates). The first two sets (i.e. forty plates) were designed by Goltzius around 1589 and the third set around 1615. The plates were engraved in the workshop of Goltzius, possibly by Jacob Matham, Jan Saenredam, Jan Muller, Jacob de Gheyn II and Pieter de Jode.” (http://www.britishmuseum.org/research/collection_online/collection_object_details.aspx?objectId=3058683&partId=1&searchText=1947,0412.3.1.&page=1).

The British Museum offers the following description of this print:
“Plate 36; Landscape with Apollo playing the panpipes in left foreground, Mercury as a shepherd talking to Battus who slowly turns into a stone; after Hendrik Goltzius” (http://www.britishmuseum.org/research/collection_online/collection_object_details.aspx?objectId=3165363&partId=1&searchText=Metamorphoses+36&page=1)

Condition: excellent slightly silvery impression with full margins as published in near faultless condition for its age (i.e. there are no stains, foxing, tears, holes, folds or abrasions and age toning is minimal).

I am selling this superb engraving of executed with great sensitivity from the workshop of one of the most famous printmakers from the Renaissance period for AU$324 (currently US$244.12/EUR217.83/GBP192.20 at the time of posting this listing) including postage and handling to anywhere in the world.


If you are interested in purchasing this masterwork of engraving, please contact me (oz_jim@printsandprinciples.com) and I will send you a PayPal invoice to make the payment easy. 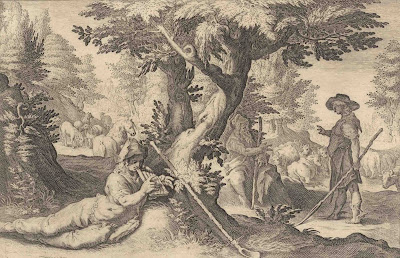 Like all good legends, the story portrayed here has people that turn into stone. The seated old man in the middle-distance is Battus, a chap who was in the wrong place and at the wrong time. Unfortunately for him, Battus is the character in the story that ends up turning into stone—a slow metamorphosis represented by the blurriness in the treatment of his features. Standing beside Battus, and the cause of his morphing into rock, is the legendary wing-footed mythological figure, Mercury, portrayed here in disguise. Mercury’s reason to be in disguise is that he needed to “bait” Battus with the bribe of receiving a big fat heifer to see if Battus would keep his word that he would tell no one about seeing Mercury stealing cattle from the god, Apollo, shown lolling in the foreground while playing on his pan-flute. Sadly, Battus succumbs to the bribe and his punishment is to be transformed into a rock; albeit a rather soft transition into rock while listening to lilting music played by Apollo—the pan-flute soundtrack to the movie “Picnic at Hanging Rock.” 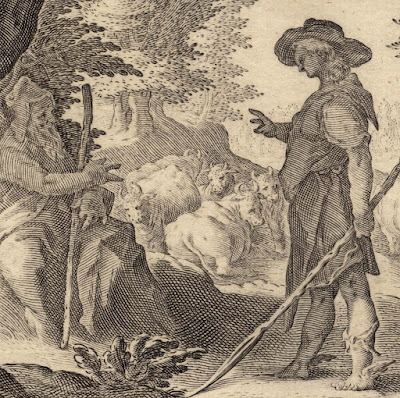 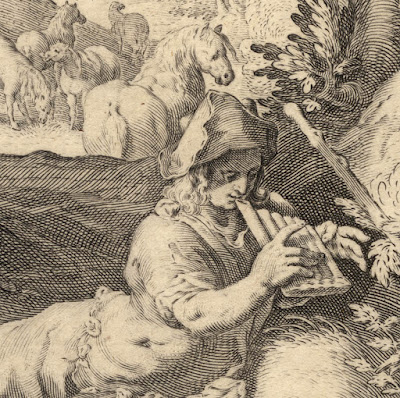 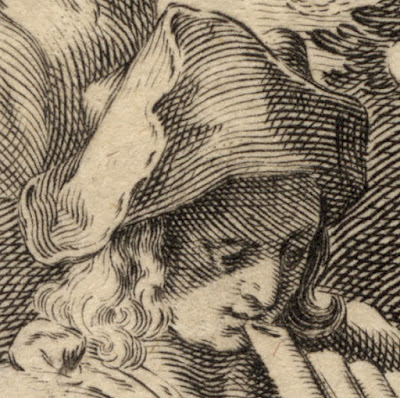 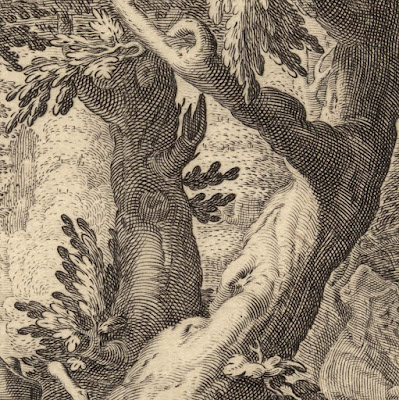 Posted by printsandprinciples at 16:02