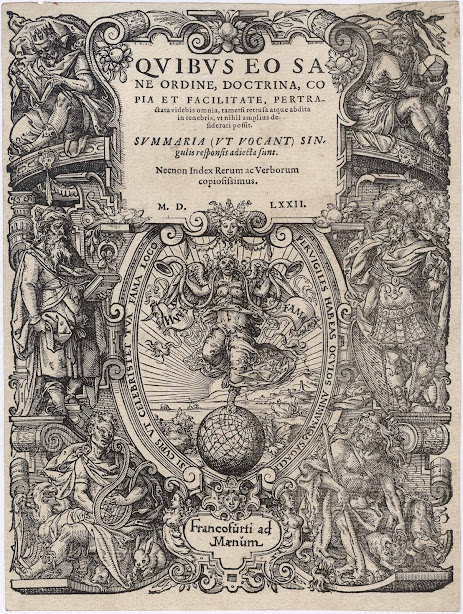 “Quibus eo sane Ordine Doctrina”, 1572, titlepage woodcut (with letterpress text) to Jacobus Philippus Portius’ (aka Giacomo Filippo Porzi) (1516–1562) “Consiliorum sive responsorum Jacobi Philippi Portii ... libri quatuor” (I apologise if I am wrong about this but the opening lines of this publication match the lettered text) published by Sigmund Feyerabend (1528­–1590) or Hieronymus Feyerabend (fl. late 1500s) in Frankfurt am Main in 1572 (as dated on plate [MDLXXII]) Jost Amman’s monogram (“I A”) at lower left. Note that this print was executed when Amman was the chief designer for Sigmund Feyerabend's publications in Frankfurt after taking over the role of Virgil Solis who died in 1562.

Woodcut with letterpress text on laid paper with a narrow margin around the image borderline.

The following is a crude translation with my apologies for all omissions and misunderstanding of the Latin text: “To whom, with the manifest … Order of the Doctrine … the capability and the facility … you will see all things … so that nothing more is needed. Summaries (such as) kept … As well as the index of the most abundant. 1572”)

The following is a crude translation that may not be accurate as the divisions in the lettering for words creates different meanings: “If you want your reputation to be sustained through the watchful eye of a keen mind”.

Inscribed on the plate above the eagle's head at lower left: "I A" (monogram of Jost Amman).

Lifetime impression from the 1572 edition (based on the quality of the line showing no sign of wear to the printing plate and the build-up of paper pulp around the chainlines suggesting an early laid paper from the 16th century).

Condition: richly inked and strong impression with a small margin around the image. The sheet is in excellent/museum-quality condition for its considerable age with no tears, holes, folds, abrasions, losses, significant stains, foxing or signs of handling.

I am selling this superb woodcut showing at its centre the female personification of Fame—note the banderole uncurling around her back lettered with the name, “FAMA”, as she blows two trumpets while standing on the globe/world set against a sunset—for $326 (currently US$236.11/EUR199.59/GBP180.99 at the time of posting this listing) including Express Mail (EMS) postage and handling to anywhere in the world, but not (of course) any import duties/taxes imposed by some countries.

If you are interested in purchasing this strong lifetime impression of an excellent woodcut from 1572, please contact me (oz_jim@printsandprinciples.com) and I will send you a PayPal invoice to make the payment easy. 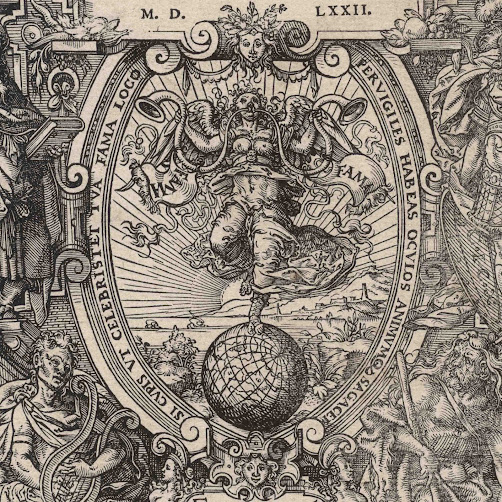 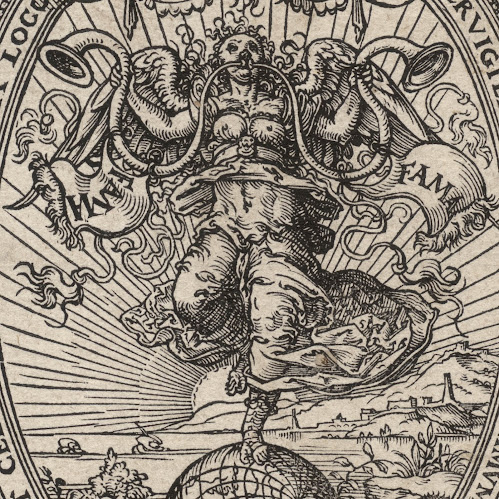 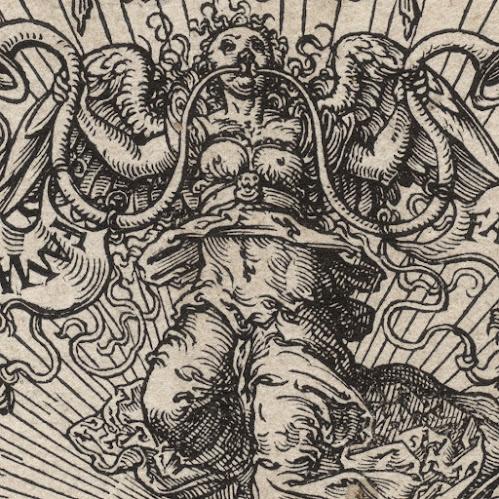 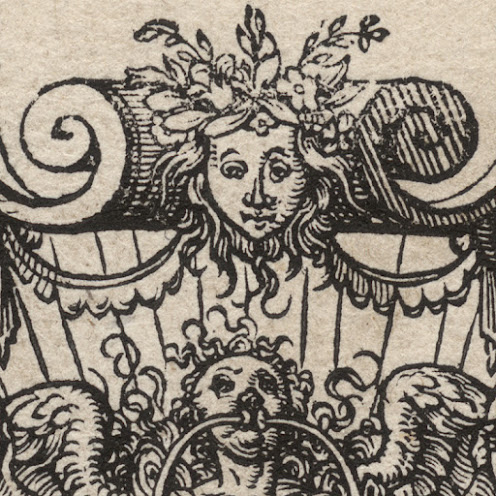 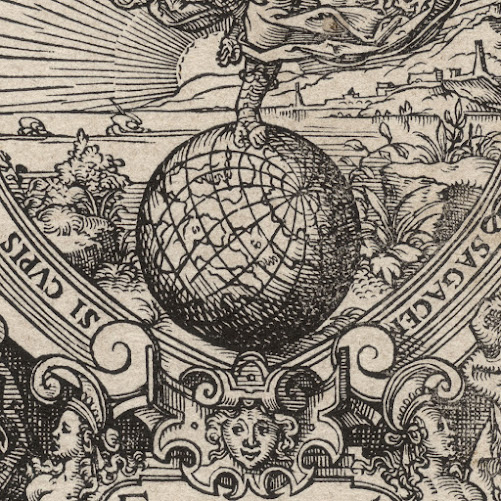 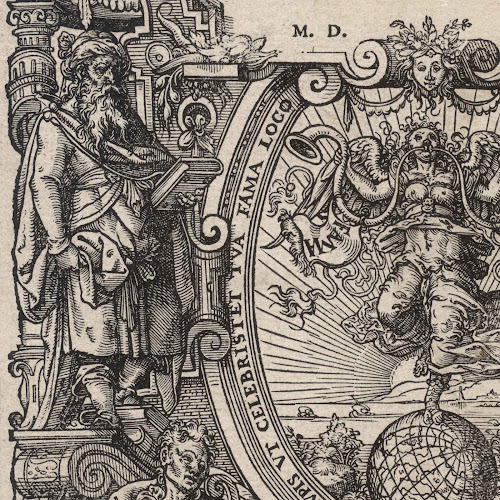 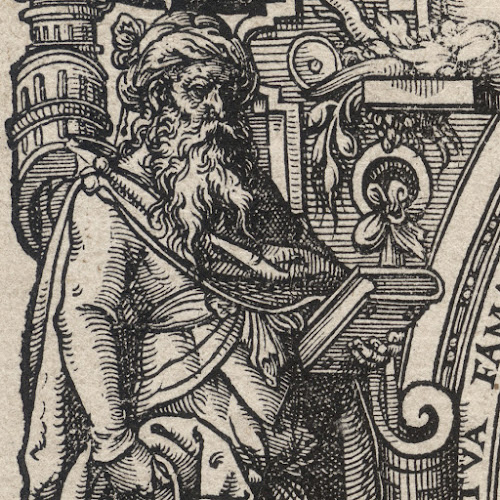 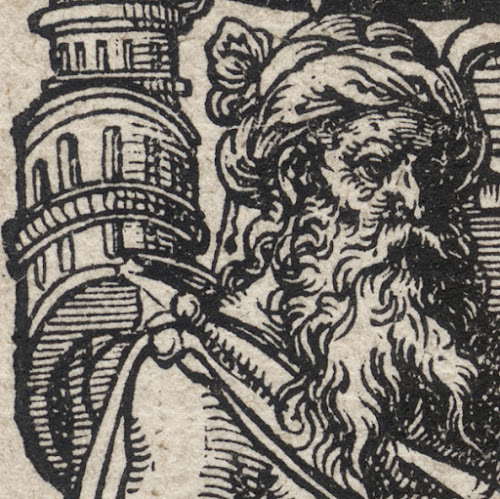 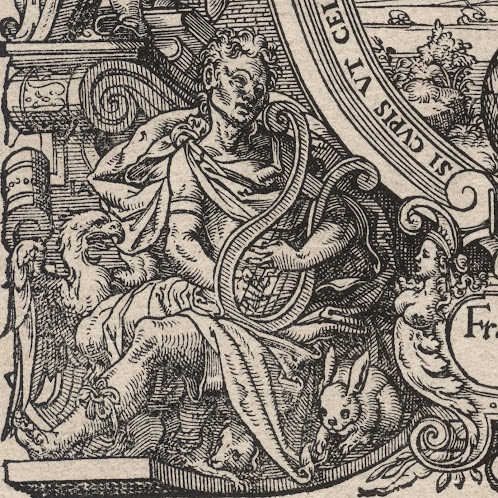