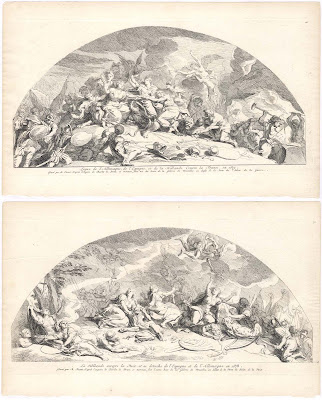 The British Museum offers the following description of the upper print:
“Plate 49: historical allegory, with, slightly to the left, the personifications of Spain, Holland and Germany joining hands to signify their alliance against France; after a preparatory drawing for the decoration of the Salon de la Paix, in Versailles.”
(http://www.britishmuseum.org/research/collection_online/collection_object_details.aspx?objectId=3030944&partId=1&searchText=Charles+Le+Brun+Picart+49&page=1)

The British Museum offers the following description of the lower print:
“Plate 50: historical allegory, with, at right, the personification of Holland standing up and accepting peace by taking an olive branch held out by Mercury while her allies, Spain and Germany, are still surrounded by soldiers and winged figures waging war; after a preparatory drawing for the decoration of the Salon de la Paix, in Versailles."
(http://www.britishmuseum.org/research/collection_online/collection_object_details.aspx?objectId=3030938&partId=1&searchText=La+Hollande+accepte&page=10

Condition: crisp and impressions with margins (as published) in excellent condition (i.e. there are no tears, holes, folds, abrasions, significant stains or foxing, but there is light age-toning to the outer edges).

I am selling this pair of large lunette format etchings by Picart for a total cost of AU$284 (currently US$217.47/EUR183.77/GBP162.24 at the time of this listing) including postage and handling to anywhere in the world (but not, of course, any import duties/taxes imposed by some countries).

If you are interested in purchasing this finely executed prints rich in symbolic narratives, please contact me (oz_jim@printsandprinciples.com) and I will send you a PayPal invoice to make the payment easy. 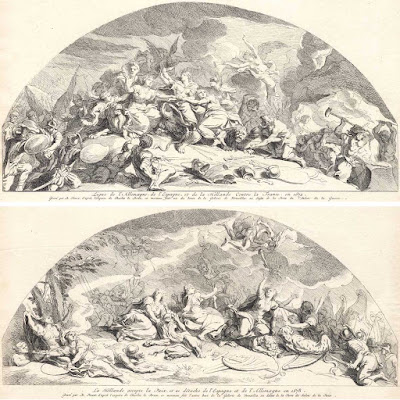 One of the problems facing artists when they set out to portray a narrative with a cast of thousands is how they can sustain a viewer’s interest without overwhelming the brain with too much visual information.

Many of the old masters, like Titian, sustained the viewer’s interest by creating a grid-like pattern of lights and darks where attention is drawn to “important” areas of bright light where figures can be easily seen juxtaposed with areas of shadows where the visual engagement with the portrayed figures is minimised (i.e. “played down”).

In this pair of semi-circular shaped etchings, Picart also employs such a formula in his translation of Le Brun’s composition. Picart, however, goes a stage further. He uses the format (i.e. the image’s shape) of a lunette to create a bridge-like tension to pictorially “hold” the mass of figures into an arrangement that is visually digestible.

In my reading of the upper composition—and I need to stress that this is my personal reading that others may not share—I scan from the weighted mass of figures on the lower-left and then progress through the turmoil of figures along an arch-like rhythm passing through the centre of the image to the lower-right side. For viewers with a mindset to read from the opposite direction (i.e. from right-to-left), I can envisage that such a reading would lead along an even more interesting path where the eye is taken on an almost spiralling journey into the centre of the image following a pattern of lights and darks. 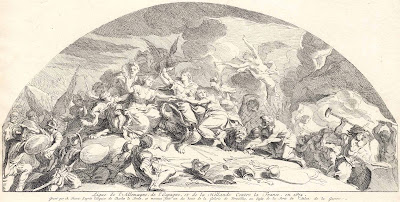 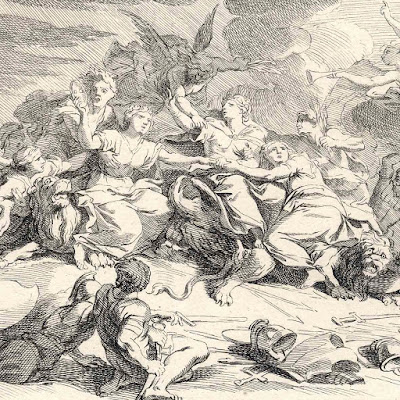 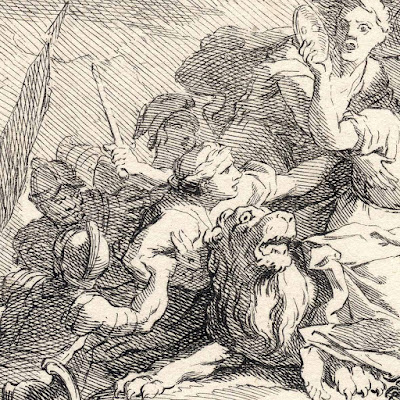 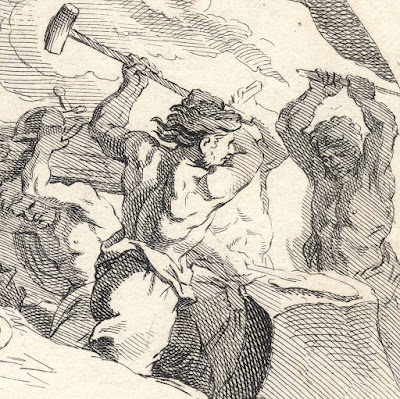 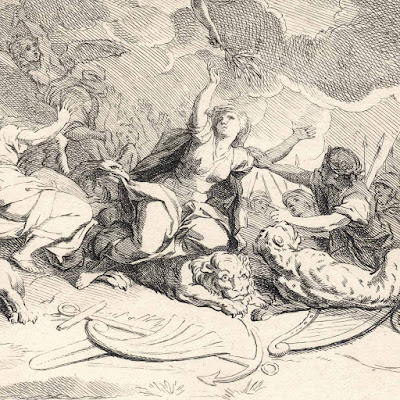 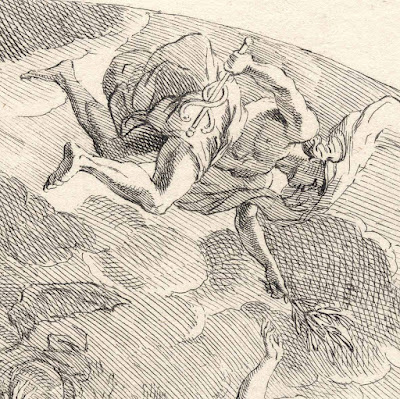 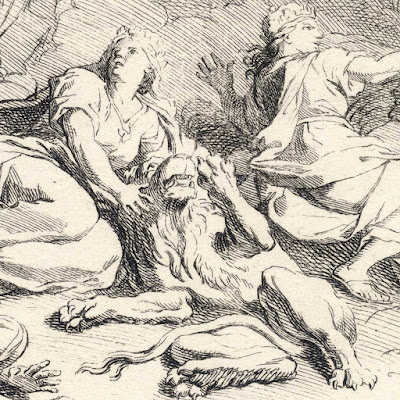 Posted by printsandprinciples at 06:30