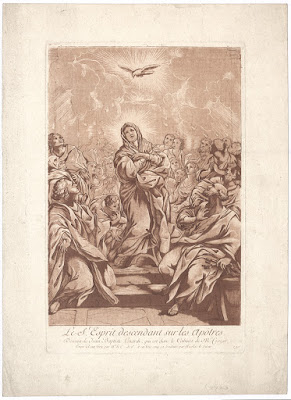 “Le Saint Esprit descendant sur les Apôtres” (The Holy Spirit descending on the Apostles), c1729–64, from the series, “Recueil d'estampes d'après les plus beaux tableaux et d'après les plus beaux desseins qui sont en France” (Collection of prints from the most beautiful paintings and from the most beautiful designs that are in France”) (aka “Recueil Crozat”; “Cabomet Croza”), after the drawing by Giovanni Battista Lenardi (1656–1704).

The British Museum offers the following description of this print:
“The Pentecost, with the Virgin standing at centre, surrounded by the Apostles, and the Holy Spirit flying above them; after a drawing by Lenardi.”
(http://www.britishmuseum.org/research/collection_online/collection_object_details.aspx?objectId=3170397&partId=1&searchText=Nicolas+le+Sueur&page=1)

Condition: near faultless impression that is crisp, well-inked and well-printed with full margins as published. The sheet is in very good condition for its age but the margins are slightly dusty and show minor signs of use (e.g. the lower left corner is bumped and there is a pencil notation at the lower right edge).

I am selling this 18th century curiosity of an intaglio print (viz. etching with aquatint) that is skilfully crafted to simulate the attributes/“look” of a chiaroscuro woodcut (i.e. a woodcut involving more than one tone of a colour) for AU$204 (currently US$154.56/EUR132.04/GBP115.82 at the time of posting this print) including postage and handling to anywhere in the world.

If you are interested in purchasing this historically important print showcasing an 18th century artist’s somewhat deceptive practice, please contact me (oz_jim@printsandprinciples.com) and I will send you a PayPal invoice to make the payment easy. 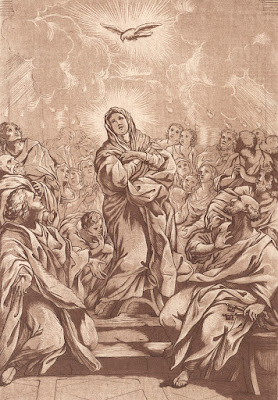 Although this intaglio print was clearly intended to deceive the viewer into believing that the image is a relief print, the artist’s motivation was more complex than simply a case of skulduggery.

After all, comte de Caylus was commissioned to execute this print as a late addition to the grand catalogue project, “Recueil Crozat”, by the French collector, Pierre Crozat (1665–1740), who had the vision to create a paper museum reproducing famous paintings and drawings of the era. In the first two volumes (published 1729 and 1737 respectively), Crozat commissioned woodcut prints, but after his death, the famous art dealer and publisher,  François Basan (1723–1797), replaced the woodcut prints in the “Recueil” with intaglio prints such as this one.

Mindful that the decision to mix mediums—or at least the superficial attributes of mediums—may have been a requirement of the “Recueil” project overseen by Basan helps to explain comte de Caylus’ motivation. After reading Margaret Morgan Grasselli’s (2003) essay in “Colorful Impressions: The Printmaking Revolution in Eighteenth-Century France” (cat. National Gallery of Art, Washington), however, I have a better understanding of comte de Caylus’ choice to use etched line. For example, Grasselli, proposes that intaglio lines “captured the quality of pen lines in a way that woodcut line blocks could not” (p. 6).

In short, comte de Caylus’ motivation was not simple skulduggery, Instead his approach may have been a requirement set by Basan and personal insight about what was needed to make a strong reproductive translation of Lenardi’s drawing. 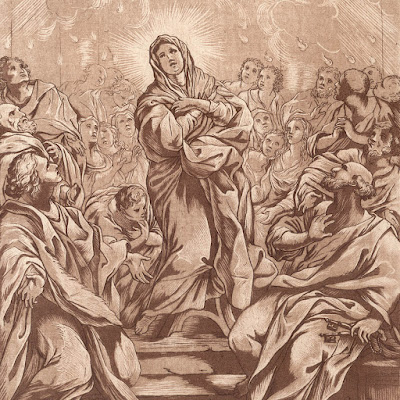 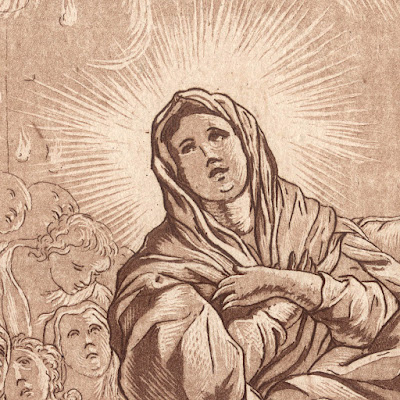 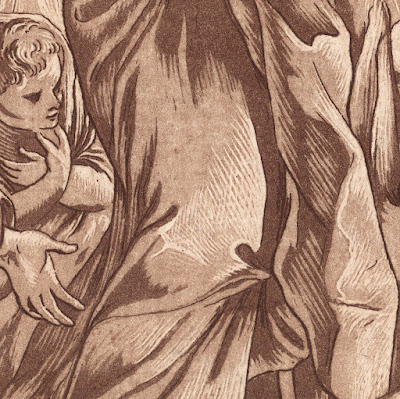 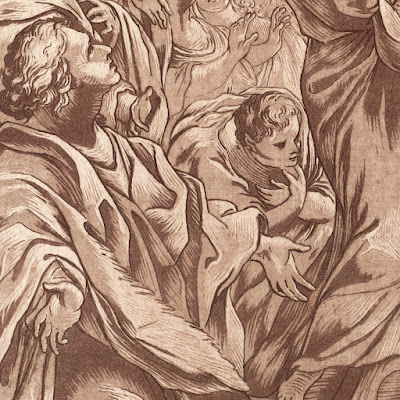 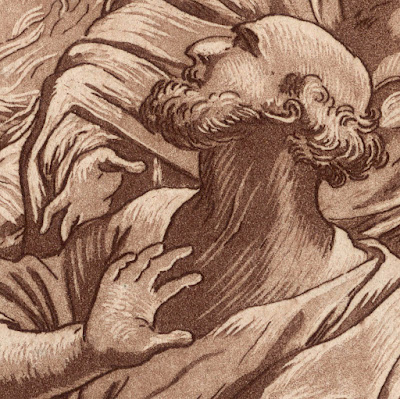 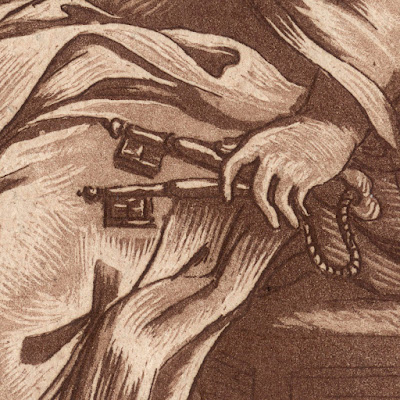 Posted by printsandprinciples at 08:08