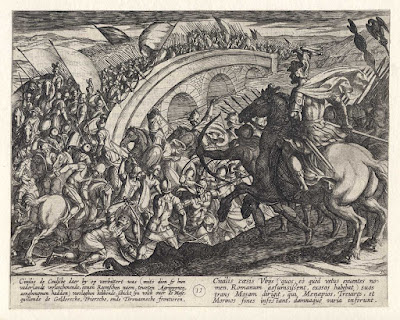 “Civilis’ Troops Crossing the Maas River” (TIB title), 1611/12, possibly after Otto van Veen (1556–1629) (according to the Rijksmuseum [see RP-P-OB-77.918), plate 11 from the series of 37 plates (including the frontispiece/titlepage), “The War of the Romans Against the Batavians” (Romanorvm et Batavorvm societas), published in the first edition (1612) with Latin letterpress text verso.

(Note: TIB [Volume 35, “Commentary: Part 2” offers the following insights about the letterpress text on verso; “…Civilis’s military operations against neighboring tribes are described, especially against the Ubii which he hated more than the others because they had romanized their name and now called themselves Agrippinenses” [p. 121 (.507)].)

State i (of ii) Note: TIB lists this impression as “SI II” and the impressions without the Latin text verso as “SI I2”. In the second state the plate is “heavily retouched” and with “PLANCHE XII INVASION DE CIVILIS / DANS LA GAULE BELGIQUE” lettered above the image borderline (amongst other changes).

See also the description of this print at the Rijksmuseum:
http://hdl.handle.net/10934/RM0001.COLLECT.439293
and at the Metropolitan Museum of Art:
https://www.metmuseum.org/art/collection/search/401945

Condition: superb early impression from the first state that is richly inked, crisp and well-printed with Latin letterpress text from verso faintly visible recto (as is appropriate and expected for a print from this early edition). The sheet is in near faultless condition (i.e. there are no tears, holes, folds, abrasions, stains or foxing), trimmed to the image borderline and backed with a support sheet of archival (millennium quality) washi paper.

I am selling this strong lifetime impression of this magnificent etching for the total cost of AU$195 (currently US$146.20/EUR122.79/GBP108.10 at the time of posting this) including postage and handling to anywhere in the world.

If you are interested in purchasing this near pristine etching from the early 1600s, please contact me (oz_jim@printsandprinciples.com) and I will send you a PayPal invoice to make the payment easy. 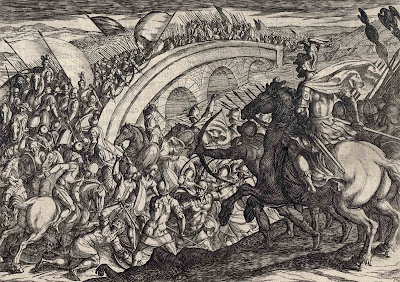 Please see my earlier discussion about another print from the same series by Tempesta:
http://www.printsandprinciples.com/2018/04/antonio-tempestas-etching-roman-misled.html

What I did not discuss in my precious discussion is the importance of the uprising and battle by the Batavians against Rome (69–70 CE) led by Claudius Civilis shown in this scene on the rearing horse in the foreground. What I find fascinating about this event is that despite the only ancient description of the battle being the account of it by Tacitus in his “Histories” (IV, 13–V, 36), the uprising was well known and perceived in the 16th century (according to Eckhard Leuschner [2007] in the second “Commentary” volume of TIB’s catalogue raisonné for Tempesta, p. 104) as “a kind of national founding saga of the Northern Netherlands”. Interestingly, the letterpress text printed on the back of each print in the series is a quotation from Tacitus relevant to the print on the page immediately following it.

At the time of the print’s execution, this uprising by Civilis was seen to parallel (to again use Leuschner’s words [op. cit.]) “the recent battle of the Netherlands against Spanish and Catholic domination” and, importantly, the historical equivalence of the past and present battles “must have been obvious to every Dutch buyer of the booklet” in which the series were published.

To ensure that the booklet with this series of prints had wider appeal than just the Dutch market, the choice of Tempesta, as an Italian etcher rather than choosing a Dutch printmaker, must have been a major consideration. Not only would Tempesta’s standing as an active Italian printmaker give the publication an introduction to the Italian market but it would also flavour the depiction of the battle with a subtle note of reconciliation between the warring parties.

Regarding this wish to create an air of reconciliation, Leushcner (2007) advises that the frontispiece to the booklet is “graced” with the “personifications of Rome and the Netherlands shaking hands” (op. cit.). 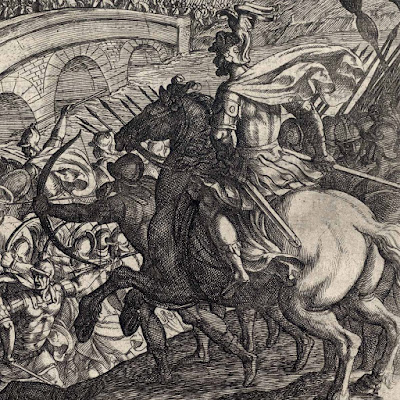 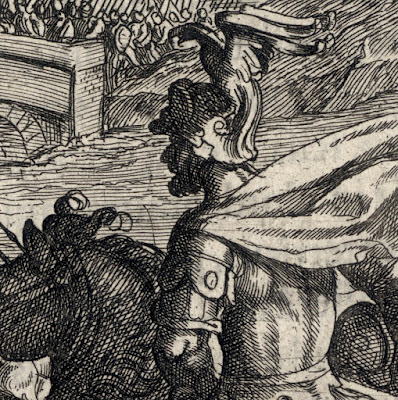 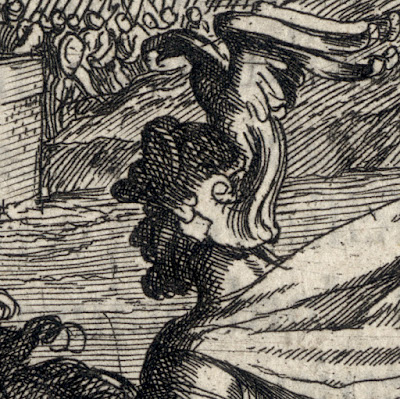 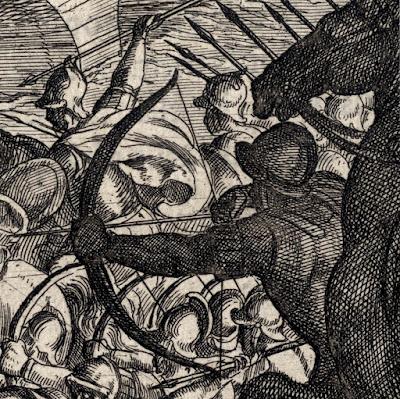 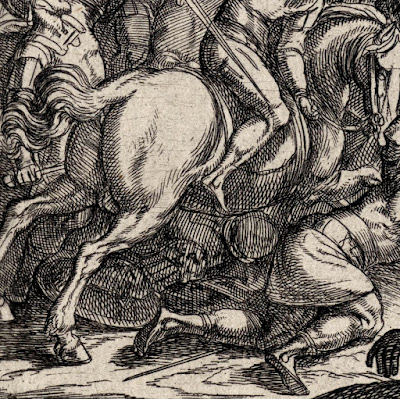 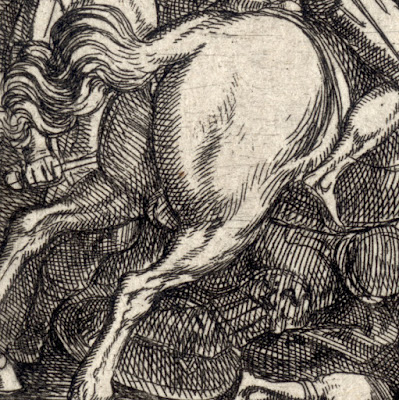 Posted by printsandprinciples at 06:17