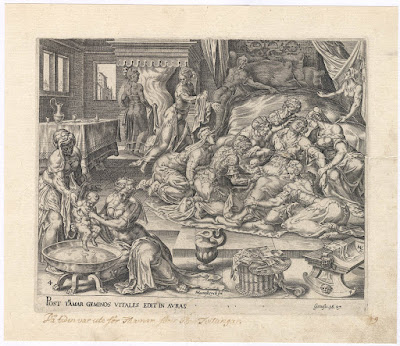 Engraving on fine laid paper with “Arms of Amsterdam” watermark and handwritten notes in brown ink by an old hand in lower margin, backed with a support sheet.

Inscribed on plate within the image borderline; (lower left) “4”; (lower centre) “Meemskerck In”; (at lower right on the infant’s bed) “[monogram of Harmen Jansz. Muller] ML / fe.”; (lower right on the rocker of the infant’s bed) “4”
Lettered on plate below the image borderline: (left) “POST TH/AMAR GEMINOS VITALES EDIT IN AURAS”; (right) “Genesis 38.27.”

The Rijksmuseum offers the following description of this print:
“Tamar gives birth to the twins Peres and Zerach. She is assisted by midwives. In the foreground two women are bathing Peres. At the bottom of the margin a reference in Latin to the Bible text in Gen. 38:27. (http://hdl.handle.net/10934/RM0001.COLLECT.552736)

See also the brief description of this print offered by the Wellcome Collection: https://wellcomecollection.org/works/nfpq6nwt?query=L0014257&wellcomeImagesUrl=GET%20/indexplus/image/L0014257.html%20HTTP/1.1

Condition: crisp impression with no signs of wear to the plate and the sheet has no foxing or significant stains, but there are closed tears (and not all of the tears are perfectly joined/abutted). The sheet has been backed with a support sheet of archival (millennium quality) washi paper to address the tears. There are (antique) brown ink handwritten notes by a past collector in the lower margin (recto).

I am selling this exceedingly rare print executed by the father of Jan Harmensz. Muller for AU$233 (currently US$174.87/EUR145.71/GBP128.24 at the time of posting this print) including postage and handling to anywhere in the world.

If you are interested in purchasing this turmoil of women assisting with a childbirth—an exceptionally rare scene in early prints—please contact me (oz_jim@printsandprinciples.com) and I will send you a PayPal invoice to make the payment easy. 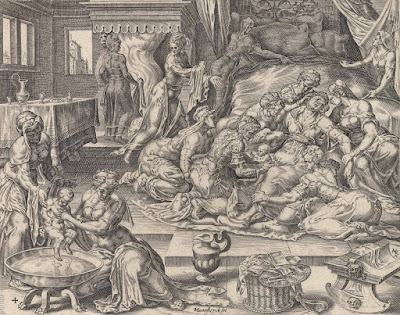 Although I know very little about the customs and procedures for assisting in childbirth in the 16th century as shown in this scene, I was surprised to see that the only thing that I know about giving birth to twins in those times was missing: the ribbon (usually red) that was tied around the wrist of the first newly born child to verify should there be an argument later about which was born first—an important consideration given that the first child would be likely to inherit the family’s fortune.

Fortunately my desire to see such a ribbon was satisfied when enlarging the details of the print and saw that the midwife had a ribbon around her wrist as she supports the child during its delivery. I just wish that the ribbon was around the wrist of the child being bathed in the foreground as it must be the first.

I must admit that I was unfamiliar with the story of Tamar’s birth of twins and when I did a spot of research to unravel the story it proved much more interesting and fun than I had imagined.

The following account of verses 27 to 30 from Genesis 38 are from the translation by Eugene H Peterson 2005, “The Message: The Bible in Contemporary Language”, Colorado Springs, CO: NavPress:

“When her time came to give birth, it turned out that there were twins in her womb. As she was giving birth, one put his hand out; the midwife tied a red thread on his hand, saying, “This one came first.” But then he pulled it back and his brother came out. She said, “Oh! A breakout!” So she named him Perez (Breakout). Then his brother came out with the red thread on his hand. They named him Zerah (Bright).” 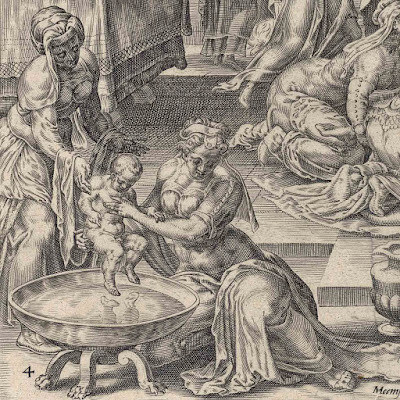 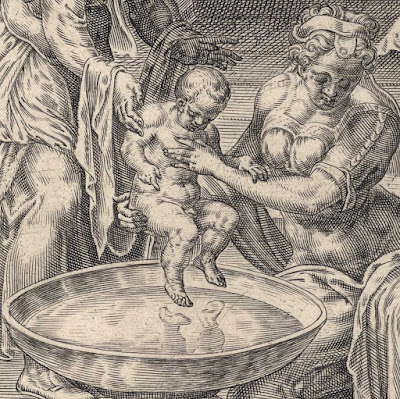 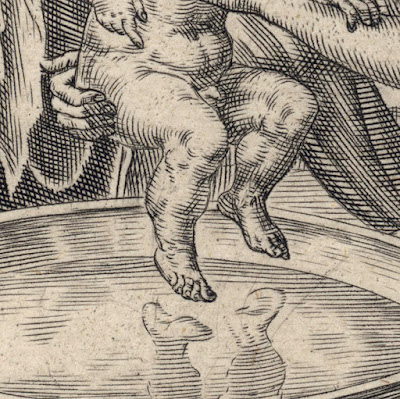 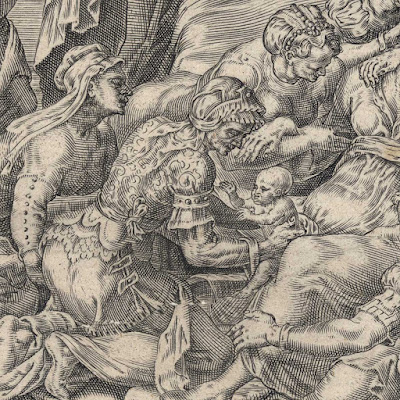 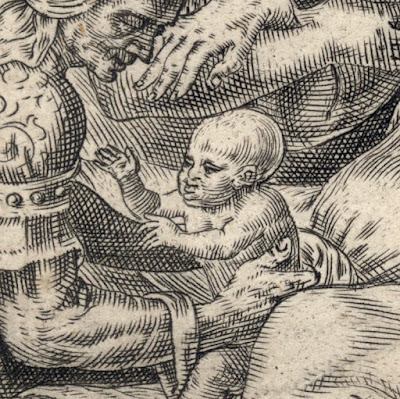 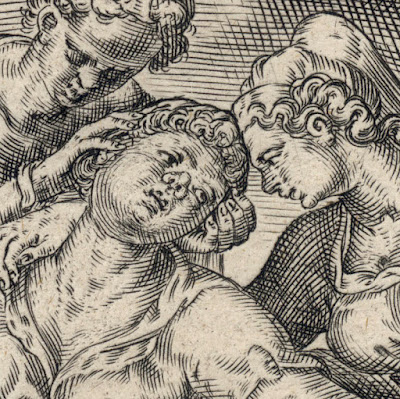 Posted by printsandprinciples at 06:07