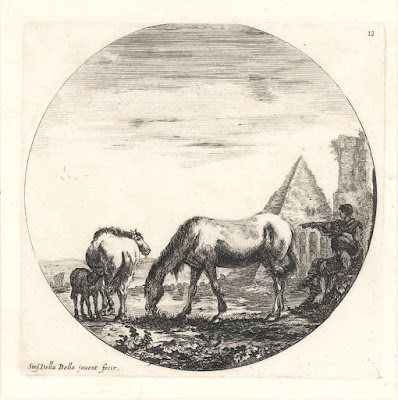 “Grazing horses at the Pyramid of Cestius” (Rijksmuseum title), c1646, plate 13 from the series of 13 round compositions, “Views of Roman ruins and landscapes”.
(Note: François Langlois [1588–1647] published this plate as number “11” in state ii; see Rijksmuseum no. RP-P-OB-35.106. The numbering of the plate is also different in states iii and iv [of vi].)

The British Museum offers the following description of this print:
“Plate numbered 13; pyramid of Caius Cestius; the pyramid behind to right, next to a ruined wall, with two horses at centre, one suckling a foal, and two herdsmen to right, one pointing towards left”
(http://www.britishmuseum.org/research/collection_online/collection_object_details.aspx?objectId=1502388&partId=1&people=132763&peoA=132763-2-60&page=2)
See also the Rijksmuseum’s description of this print:
“A landscape with two grazing horses in the foreground, a foal and two figures on the right. In the background the Pyramid of Cestius.”
(http://hdl.handle.net/10934/RM0001.collect.77398)

I am selling this round formatted image revealing Della Bella’s interest in referencing Roman antiquity for AU$146 in total (currently US$108.53/EUR92.30/GBP81.67 at the time of posting this listing) including postage and handling to anywhere in the world (but not, of course, any import duties/taxes imposed by some countries).

If you are interested in purchasing this visually arresting composition with grazing horses and Cestius’ pyramid, please contact me (oz_jim@printsandprinciples.com) and I will send you a PayPal invoice to make the payment easy. 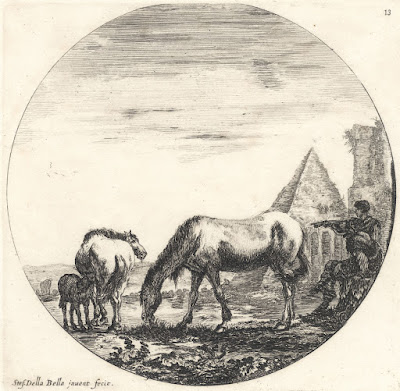 I love circular/tondo compositions! In the case of this image, the direction of light portrayed falling on the scene from the upper-right lends the impression—at least to my eyes—that the space framed by the round borderline is like looking into a concave surface (e.g. a soup spoon). Of course, when the artist originally inscribed the image on the printing plate the light would have been shown falling from the upper-left creating the impression of a convex surface (e.g. the back of a soup spoon).

Although the angle of lighting in this scene helps to project the idea that the portrayed scene is pictorially sunken into a porthole-like concavity, there is an anomaly in the way that the artist has arranged the dark areas of the composition that counters the notion of a concavity: the arrangement of shadowy dark tones at the lower right. When the composition is looked at with half-closed eyes, this crescent of darkness gives the impression—again, at least to my eyes—that the surface plane of the image is convex rather than concave. An illusion and a conundrum that counteracts perception of the image as a concave surface. 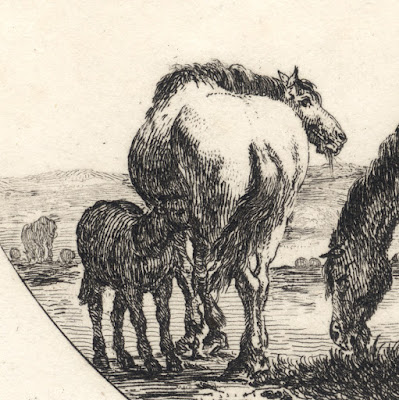 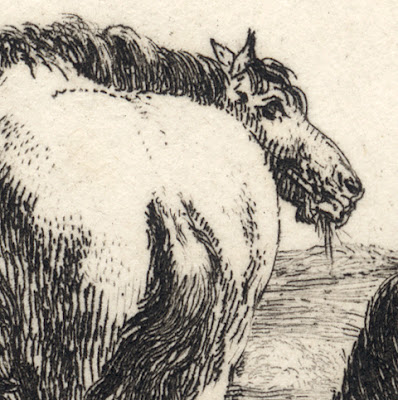 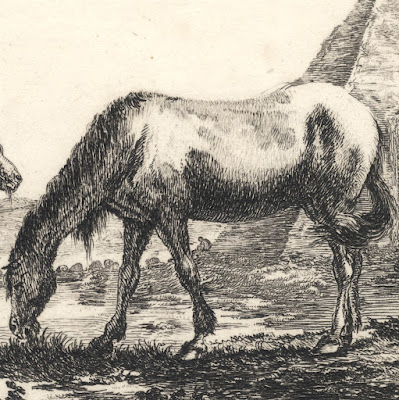 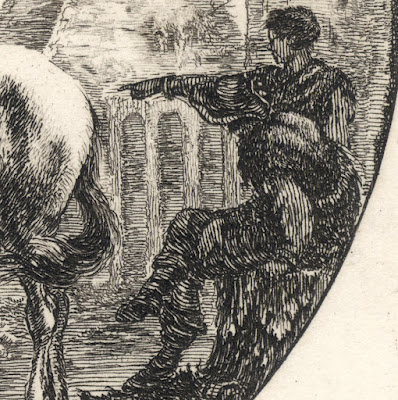 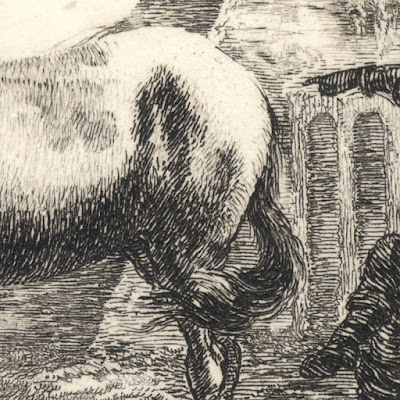 Posted by printsandprinciples at 05:15