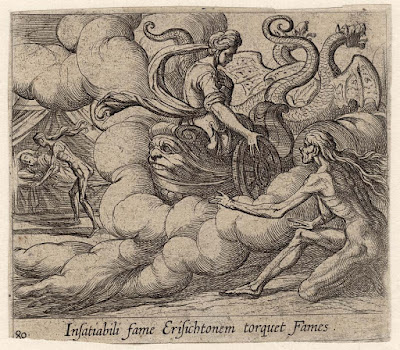 The British Museum offers the following description of this print:
“Plate 80; Ceres seated in her chariot at centre, gesturing towards Fames, seated naked on the ground to right; with Fames appearing in Erysichthon's bed chamber behind to left. 1606 Etching” (http://www.britishmuseum.org/research/collection_online/collection_object_details.aspx?objectId=1542986&partId=1&searchText=+X,3.194&page=1)

The Metropolitan Museum of Fine Art offers a slightly different reading of this print: “Ceres' Nymph Telling Famine to Strike Erysichthon” (http://www.metmuseum.org/art/collection/search/402173) and the Fine Arts Museums of San Francisco offer this insight: “A nymph in a chariot speaks to Famine, a skinny nude woman.” (https://art.famsf.org/antonio-tempesta/insatiabili-fame-erisichtonem-torquet-fames-ceres-ordering-erysicthons-punishment)

Condition: good impression with narrow margins around the image borderline. There is a light fold that is well flattened, otherwise the print is in excellent condition (i.e. there are no tears, holes abrasions, stains or foxing).

I am selling this graphically strong early 17th century illustration to “Ovid’s Metamorphosis” by one of the most famous printmakers of the period for the total cost of AU$157 (currently US$120.70/EUR113.61/GBP96.68 at the time of this listing) including postage and handling to anywhere in the world.
If you are interested in purchasing this small but visually arresting print from the late Renaissance era, please contact me (oz_jim@printsandprinciples.com) and I will send you a PayPal invoice to make the payment easy. 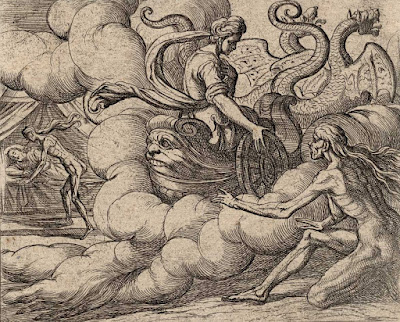 For those who may be unfamiliar with the story behind this illustration, I wish to offer a third version and a slightly different one to those offered by the BM and the Met cited earlier.
On the far left side of the image is shown a figure who might appear to be resting comfortably in bed being attended to by a naked and very skinny lady with her hair blowing in the breeze. The resting figure is Erysichthon (aka Erisichthon) who is the son of the mythological Greek King of Thessaly, Triopas, and the lady who seems to be attending to his every need is Fames (aka Famine). Now that I have introduced the mythological folk I will explain what has led up to this seemingly delightful bedroom view—which of course is far from the truth.

Erysichthon, the chap shown in the bed, had an evil streak. Before he lay down on the bed, he had rashly ordered his men to fell all the trees in Demeter’s sacred grove—I don’t know why but no doubt he had personal reasons. This was not the end of his folly as when his team of lumberjacks refused to cut down the most sacred of all the trees—an oak tree festooned with votive wreaths representing every prayer that Demeter had granted—(to quote from Wikipedia) he “grabbed an axe and cut it down himself, killing a dryad nymph in the process.”

As retribution for Erysichton’s unconscionable act of sacred tree clearing, Ceres (or one of her nymph helpers), shown in the centre of the illustration aboard a chariot pulled by dragons, advises Fames to dwell in Erysichton’s entrails. In her new abode, Fames sets about tormenting Erusichton with hunger leading him to gnaw away upon his body until there was nothing left.

If I may now return to the portrayed bedroom scene, close examination reveals the moment wherein Fames enters the soon to be hideously consumed Eryschton by a breath of air from her mouth. 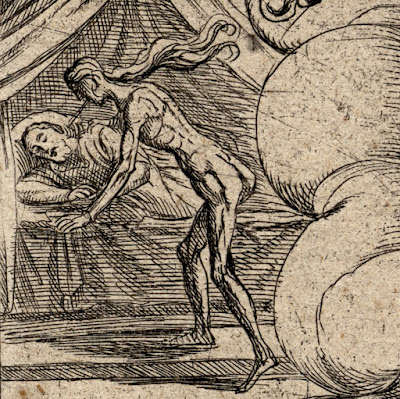 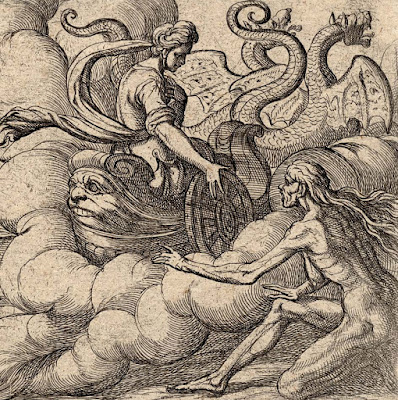 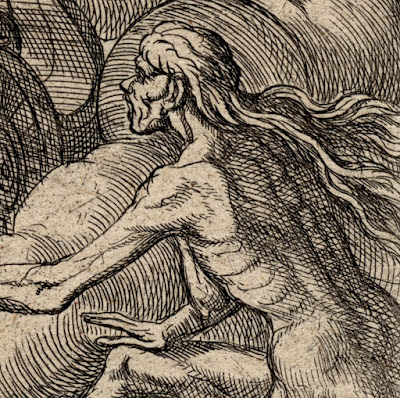 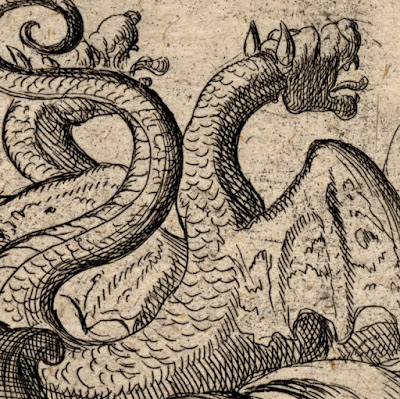 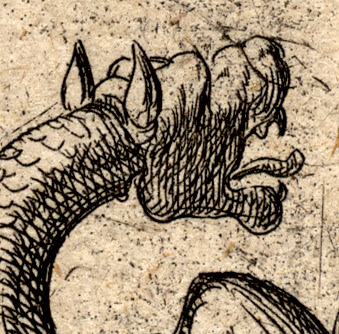 Posted by printsandprinciples at 06:06