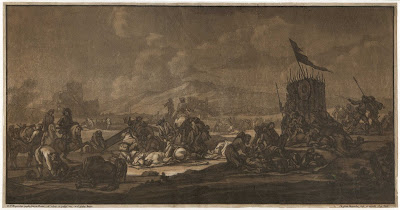 Condition: crisp impression trimmed at the platemark. The sheet has light creasing and a few scuff marks (restored with pencil touches) and a water stain that is only visible verso; otherwise the sheet is in good condition for its age (i.e. there are no tears, holes, losses, foxing or significant stains).

I am selling this luminous and velvety mezzotint full of fascinating incidents on a battle field illuminated with almost theatrical lighting for the total price of AU$298 including postage and handling to anywhere in the world.
If you are interested in purchasing this panoramic scene executed by the son of the great master of mezzotint and arguably the foremost battle scene painter of the 18th century, Georg Philipp Rugendas I, please contact me (oz_jim@printsandprinciples.com) and I will send you a PayPal invoice to make the payment easy. 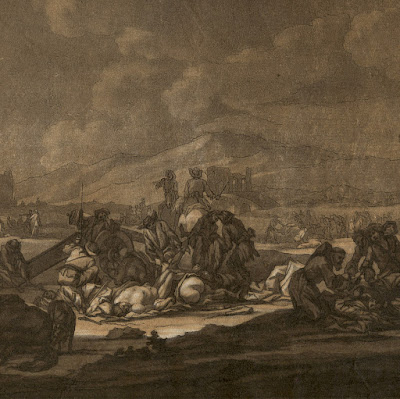 Sadly, the word “mood” has fallen out of favour with many contemporary writers as it is too imprecise. Nevertheless, I need to resurrect it as this image projects MOOD: an inexplicably heavy mood of quiet melancholy. No doubt this feeling arises in part from the portrayed desolation of the aftermath of a battle gently lit by a shaft of light—a visual device called chiaroscuro lighting that was popular at the time for the theatrical effect that it gave to an image. And, no doubt, the small incidents (e.g. dead bodies being stripped of their clothes, a priest performing the last rites over a dying figure and a scattering of grieving men) also contribute to this mood of profound sadness. For me, however, the ultimate reason must lie with the artist who conceived the composition, Philipp Rugendas I, as he was one of the first war artists who actually worked in battles to record what really occurred. In short, the genius of this image lies with the authenticity of what is portrayed.

From a technical standpoint, this print is very interesting to me as it fits neatly within the mould of a very German approach to rendering tone. What I mean by this sweeping categorisation is best explained by comparing the traditional Italian approach with the German approach to simplifying tones into flat patterns (i.e. posterisation). Essentially the German approach, as exemplified here, is to use an outline around a tone whereas the Italian approach is to abut tones without outlines. The reason that I mention this bold generalisation of cultural propensity is that (all going well) I will be discussing the English approach to using tone in an upcoming post. 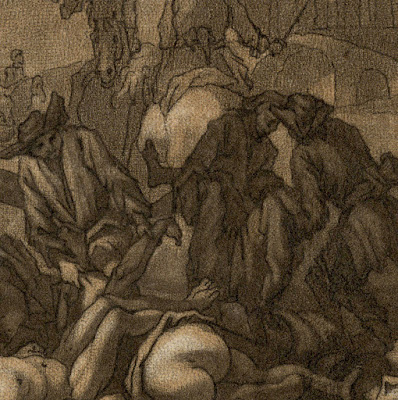 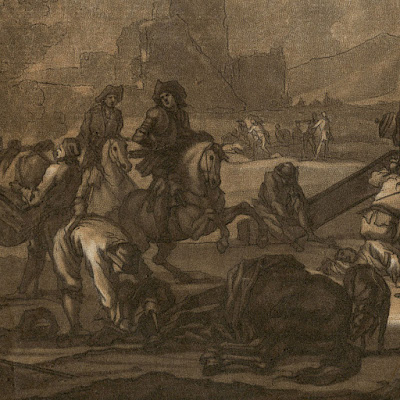 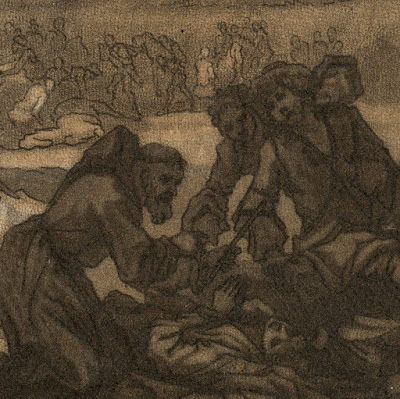 Posted by printsandprinciples at 06:24