Daniel Hopfer’s etching, “St Paul at a banquet with the excluded clergy guarded by the devil” 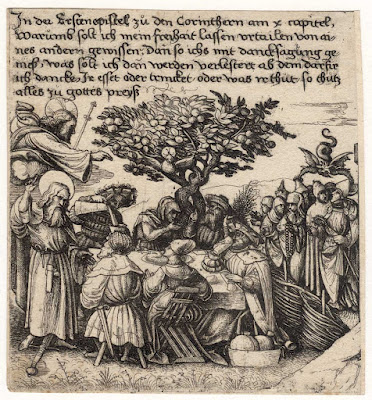 Daniel Hopfer (1471–1536)
“St Paul at a banquet with the excluded clergy guarded by the devil”, c.1520, the lower-left panel in the composite print, “Christ’s Mission to the Apostles and Other New Testament Scenes” (Bartsch title) or “Food regulations from the Gospels and the Acta Apostolorum”, published in the 17th century edition by David Funck (fl. 1682–1709) in “Opera Hopferiana”, Nuremberg.

According to the British Museum, the original plate is signed with monogram in the plate at centre. Lettered above each scene with corresponding passage from the Bible.

The British Museum offers the following description of the whole print of which this impression is a part:
“Food regulations from the Gospels and the Acta Apostolorum; six scenes illustrating various Bible passages; including Christ sending out his apostles; instructing them on what to eat on their journeys; the clean and the unclean; St Paul at a banquet from which the clergy, guarded by a devil, are excluded; St Paul showing Christ to a congregation; St Paul at a wedding; impression from the Funck series. Etching”
(http://www.britishmuseum.org/research/collection_online/collection_object_details.aspx?objectId=1539293&partId=1&searchText=hopfer&page=4)

Condition: richly inked, crisp impression trimmed at, or close to, the image borderline, with light foxing and remnants of mounting hinges (verso); otherwise in excellent condition.

I am selling this iron etching by the legendary Daniel Hopfer—the first artist to use etching for prints on paper—that is a panel in a larger composite six-panel plate for the total cost of AU$320 (currently US$245.32/EUR226.94/GBP193.18 at the time of posting this listing) including postage and handling to anywhere in the world.
If you are interested in purchasing this small masterpiece from the Renaissance era, please contact me (oz_jim@printsandprinciples.com) and I will send you a PayPal invoice to make the payment easy. 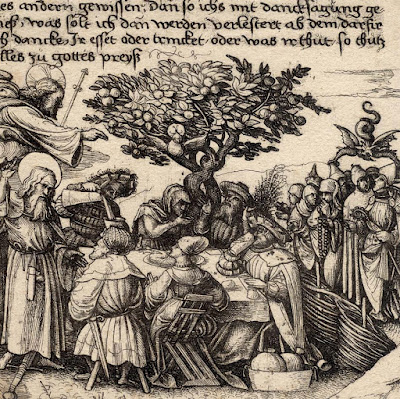 Once I saw at the far right of this image the tiny devil claiming ownership of the clergy who were excluded from St Paul’s feast (see 1 Corinthians 2:16) I fell in love with this print. Beyond the devil, close inspection of the scene shows many other fascinating details. For example, I almost did not see at the centre of the composition the haloed dove of the Holy Spirit almost camouflaged in the fruit tree—the apple tree of the Garden of Eden? No doubt, Hopfer chose to place this symbolic bird at this spot so that it would be viewed as the emissary for God’s word promulgated by the Heaven borne Jesus as he points to the faithful at the banquet table. Note also the sword lying on the ground at St Paul’s feet and the woven wicker fence separating the clergy from the feast. Indeed, there is so much “happening” in this print that I can’t help but think of the great Stanley Spencer (1891–1959) and his tightly orchestrated compositions.

Although I cannot read the German text lettered across the top of the image I like to imagine that it might address one of my favourite words of advice given by Jesus to his disciples:  be “wise as serpents, and harmless as doves” (Matthew 10:16) 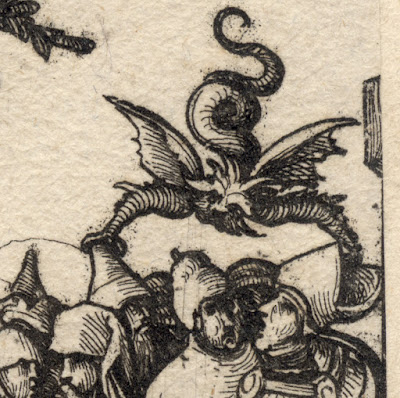 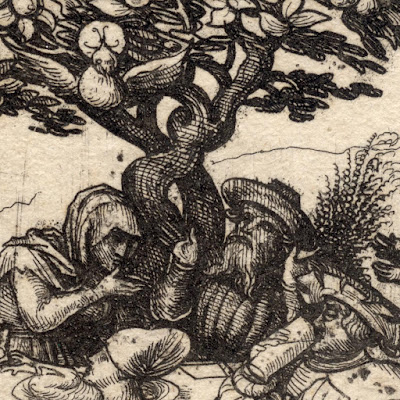 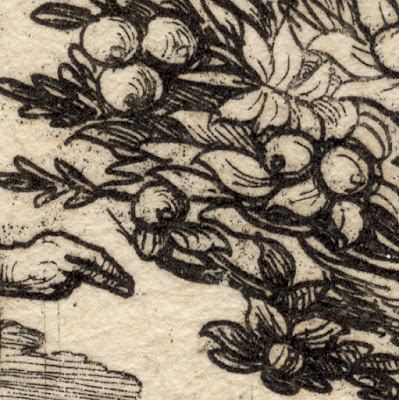 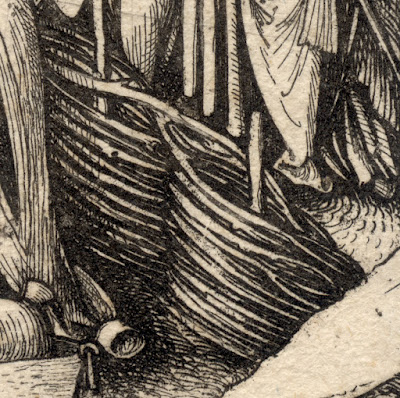