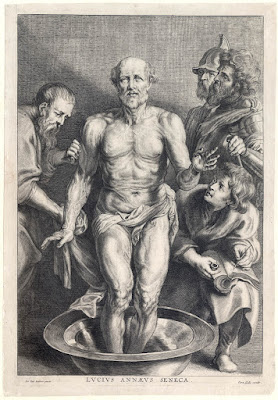 The British Museum offers the following description of this print:
“The Death of Seneca; the philosopher standing at centre with his feet in a basin of water, supported by a disciple at left while another takes down his last words at right, two others onlooking beyond at right; second state with address of Galle; after Peter Paul Rubens”
(http://www.britishmuseum.org/research/collection_online/collection_object_details.aspx?objectId=3164821&partId=1&searchText=galle+Seneca&page=1)

Condition: excellent impression revealing very light wear to the plate with margins (varying in size but approximately 1 cm) and laid upon a support sheet. The sheet has minor nicks, abrasions mainly on the lower edge of the margin but these issues are addressed by the conservation of the sheet on a washi paper support and virtually invisible dot retouching.

I am selling this superbly executed, large and famous engraving for the total cost of AU$221 (currently US$172.95/EUR146.72/GBP131.17 at the time of this listing) including postage and handling to anywhere in the world.

If you are interested in purchasing this 17th century masterwork of engraving, please contact me (oz_jim@printsandprinciples.com) and I will send you a PayPal invoice to make the payment easy. 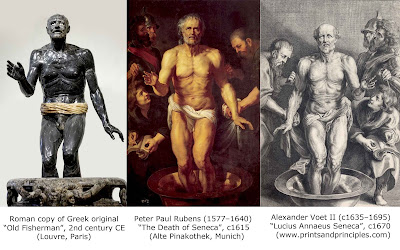 This should be a dreadful scene in that it portrays Emperor Nero’s childhood tutor and friend, the philosopher Lucius Annaeus Seneca—known better by just his surname, Seneca—committing suicide by order of his former pupil … but it really isn’t. Instead I see the scene like a crucifixion image of Christ which is hideous in its depiction of an awful physical death but is in fact a celebration of atonement and love. In the case of Seneca, the sacrifice of his physical body is a celebratory exhibition of his free will against oppression—or as Mary Beard (2014) explains in “How Stoical Was Seneca?": Seneca offered this display of his death as “the only thing he had left, and the best: ‘the image of his own life,’ imago vitae suae.” (http://www.nybooks.com/articles/2014/10/09/how-stoical-was-seneca/)

Of course, like all martyr’s deaths, the “real” circumstances are far from spiritually transcendent. Seneca was an old man and when he slit his veins his blood flowed too slowly and so he tried taking hemlock to help in his plans for a glorious suicide. This too was ineffective and so he immersed himself in a hot bath so that his blood would flow freely. Sadly, this ploy was not successful either but the fumes from the hot bath did ultimately kill this magnificent stoic.

Regarding this famous engraving by Voet, it too is not an unproblematic illustration of Seneca’s suicide. As may be seen in the composite image shown above, Voet’s engraving reproduces Ruben’s painting now in the Alte Pinakothek, Munich, inv.no.305 (Rooses 812)—“with variations” as the BM curator points out (see BM no. 1841,0809.48). The origin of the image does not end with Rubens. Rubens also visually cannibalised the image from the pose of a Roman sculpture of an old fisherman (see the left image) which was in turn a copy of an ancient Greek (Hellenistic) sculpture. Note that the “bath” included in the Roman sculpture is a recent addition designed to give a contemporary meaningful context to the old fisherman; it has nothing to do with the original sculpture and its ancient context. 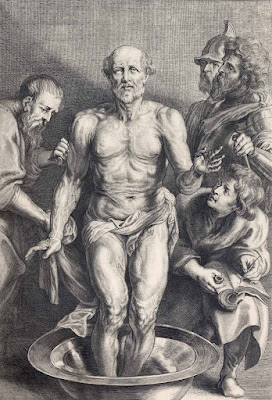 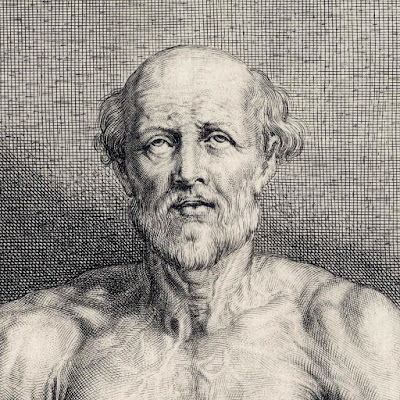 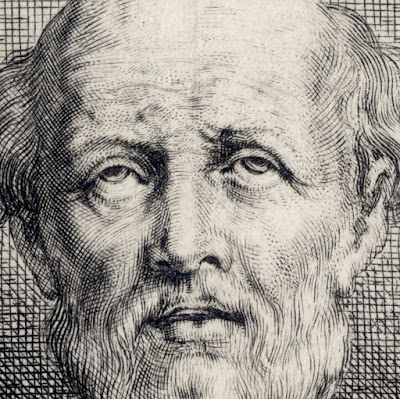 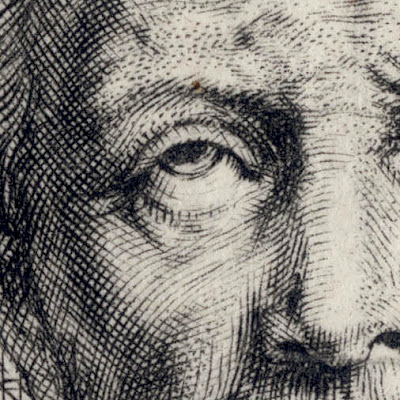 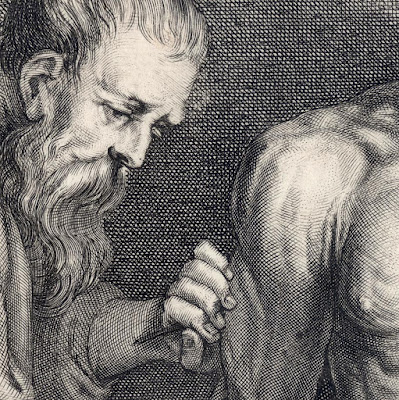 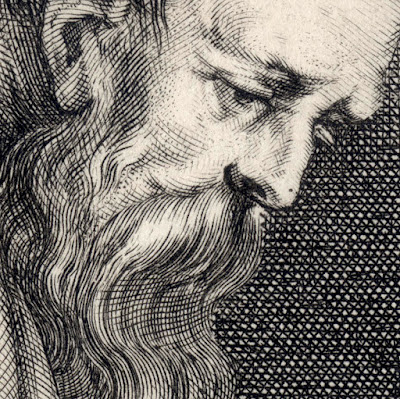 Posted by printsandprinciples at 05:05