(Note: the BM holds an album and describes the title page to the series: http://www.britishmuseum.org/research/collection_online/collection_object_details.aspx?objectId=3262187&partId=1&searchText=collaert+1582&page=1)

Engraving on fine laid paper trimmed along the platemarks and lined onto a conservator’s support sheet
Size: (sheet) 8.3 x 21.8 cm
Inscribed below the image borderline: (from the left) “2”; "Sic passim spiculis, gladijs, leuibusq[ae] sagittis”;  “In foueas agitant armatos cornibus Vros." (advised trans. "Thus with darts, swords, and light arrows men everywhere drive the horned Aurochs into pits.")
State ii? (of ii?) After the addition of the plate number, “2”. My uncertainty about the number of other states is that I understand that there were alterations to the number sequences in later editions (e.g. plate 37 became plate 47). This impression is certainly an early one as there is very little wear to the plate.

The British Museum offers the following description of this print:
“A group of men, some on foot, some on horseback, and dogs, surround and attack an aurochs, at the centre of a wooded landscape; the animal has an arrow stuck in its back, and its heels are nipped at by some of the dogs; after Hans Bol”
(http://www.britishmuseum.org/research/collection_online/collection_object_details.aspx?objectId=3263657&partId=1&searchText=collaert+1582+Sic+vros&page=1)
See also the description of this print at the Rijksmuseum:

Condition: marvellous early impression showing no wear to the plate from the numbered publication state (state ii?). The sheet has been trimmed to the platemark and laid onto a support sheet. The sheet has the patina of light handling marks appropriate to the age of the print; otherwise the sheet is in excellent condition (i.e. there are no tears, holes, abrasions, folds, stains or foxing).

I am selling museum-quality early impression showing a hunt for the wild European ox—the anurochs—only 45 years before this species of animal became extinct, for the total cost of AU$280 (currently US$220/EUR186.54/GBP167.38 at the time of this listing) including postage and handling to anywhere in the world.

If you are interested in purchasing this panoramic illustration of the drama of a 16th century hunt, please contact me (oz_jim@printsandprinciples.com) and I will send you a PayPal invoice to make the payment easy.

For those, like me, who may not be familiar with animal called an anurochs (the spelling of a herd of anurochs is the same as that of a single anurochs) being hunted here, according to www.merriam-webster.com/dictionary, it is “an extinct large long-horned wild ox (Bos primigenius) of Europe that is the ancestor of domestic cattle.” Interestingly—perhaps the adverb, “poignantly”, might be more appropriate—as the scene portrayed here in 1582 must be one of the last recorded hunts for an anurochs as the breed was exterminated in 1627 with the last one killed in Poland. So sad … 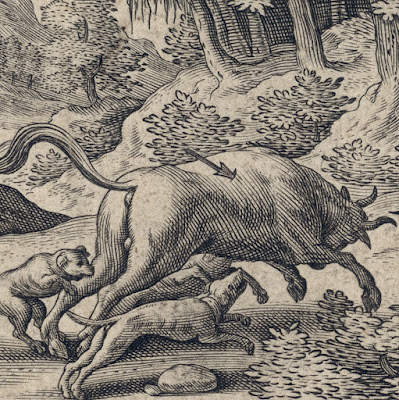 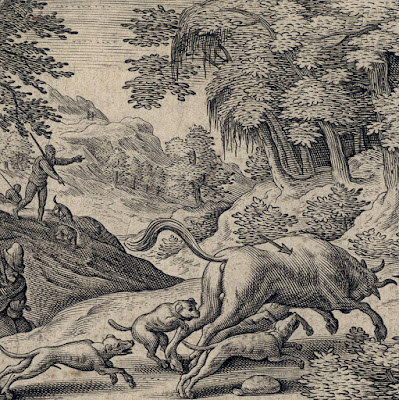 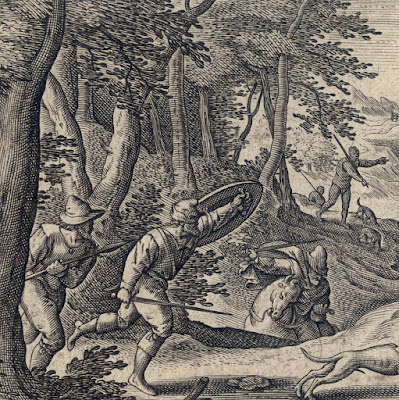 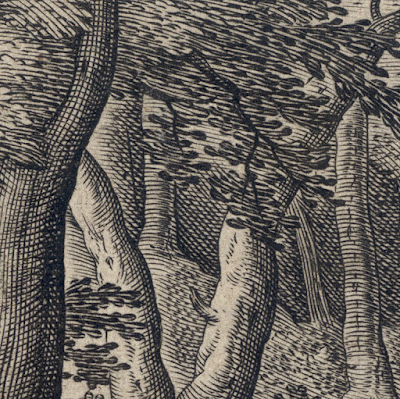 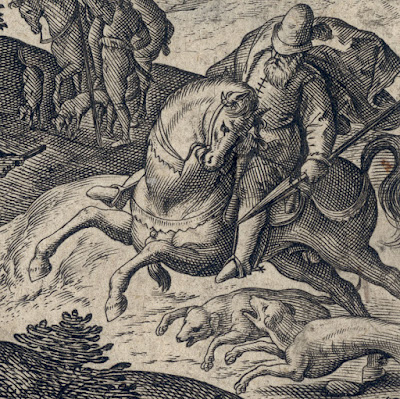 Posted by printsandprinciples at 03:51