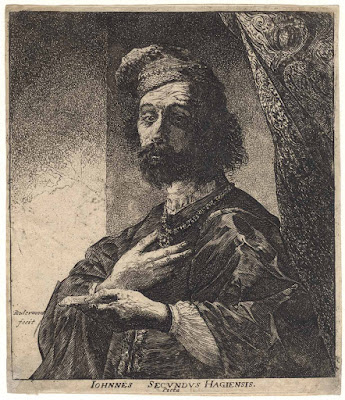 The British Museum offers the following description of this print:
“Portrait of the poet Joannes Secundus with short dark beard, half-length slightly turned to the left, wearing a doctoral cloak and a necklace, on his head a cap decorated with a pearl band, holding a paper in his right hand and touching his chest with his left hand, a patterned curtain beyond at right; third state with signature”
(http://www.britishmuseum.org/research/collection_online/collection_object_details.aspx?objectId=3535138&partId=1&searchText=Rodermondt&page=1); see also the description at the Rijksmuseum: http://hdl.handle.net/10934/RM0001.COLLECT.342466

Note: there is a deceptive copy of this print made by William Young Ottley (1771–1836)  in 1828 (Hollstein 11 [copy]) which may be distinguished from the original (this impression) by the shape of the triangular shadow pattern on the upper left (see http://www.britishmuseum.org/research/collection_online/collection_object_details.aspx?objectId=3284153&partId=1&searchText=1880,0807.93&page=1)

Condition: richly inked impression showing areas of wear in the printing plate addressed by light retouching. The print is trimmed along the platemark and there is (old) restoration of the lower left corner where there is a replenished loss. The sheet has minor handling marks appropriate to the age of the print, remnants of earlier mounting (verso) and thin areas (visible verso).

I am selling this marvellously evocative portrait executed in the early 1600s of a Renaissance poet cast in a dramatic pose and in theatrical lighting (chiaroscuro) for the total cost of AU$198 (currently US$156.47/EUR132.33/GBP117.76 at the time of this listing) including postage and handling to anywhere in the world.

If you are interested in purchasing this remarkable early portrait of a poet—an absolutely stunning portrait seldom seen on the market although copies of it abound—please contact me (oz_jim@printsandprinciples.com) and I will send you a PayPal invoice to make the payment easy. 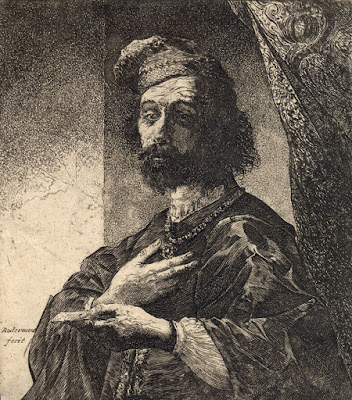 Although there are translations of the texts written by Dutch humanist poet, Janus Secundus Nicolai Hagiensis, currently available (e.g. Paul Murgatroyd’s translation [2000], “The Amatory Elegies of Johannes Secundus” and Gale Ecco’s [2010], “Kisses: A poetical translation …”), I must admit that I haven’t read any of his texts. Arguably, this should exclude me from making pithy comments about poets at the time that this etching was executed. Sadly, I feel duty bound to offer a few insights regardless.

As a starting point, I will begin with written texts of Leonardo da Vinci—simply because my cook is presently reading what seems to be an interesting tangential account about him in Dianne Hales’ (2014), “Mona Lisa: A Life Discovered.”

At the time of Leonardo, if one were to be born illegitimate—as is the case with Leonardo—then the choice of which university one could attend was limited, as one was not permitted to attend ANY university. Essentially if you were illegitimate your life was to be spent ignorant of the words of the great scholars simply because you would not be trained to read and speak Latin: the key hallmark of a “good education”. Leonardo could do neither. Another hallmark of a “good education” during the Renaissance was that EVERYONE (or everyone as far as I am aware) had to write as a right-hander. Again, Leonardo “failed” on this account of being “well educated” as he was very proficient at writing with his left hand.

With regard to texts written by Renaissance scholars, such as those by Hagiensis (which I repeat that I haven’t read), there was a leaning to move away from classical Latin, which I understand was somewhat restricted to the ecclesiastical domain, to a fresh use of Latin and the formation of new words termed “Neo-Latin”.

When I look at this portrait of Hagiensis, mindful that he would be trained as a scholar to be right-handed, I love the idea that he is holding a page of his poetry in the left-hand thus leaving his right hand free for the business of writing. From a very personal standpoint, what I also love about this portrait is that he is portrayed midway between a contextual duality of two extremes: the hard geometry of the vertical corner of a room on his right side and the soft curves of a curtain on his left. 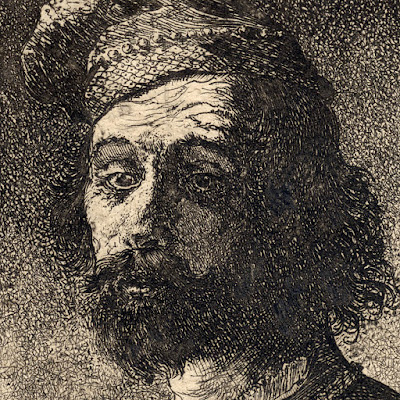 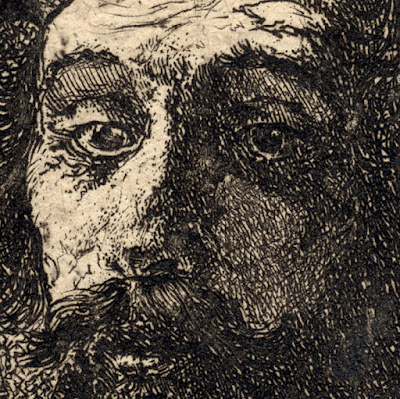 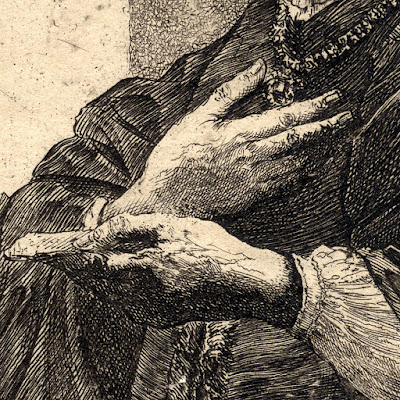 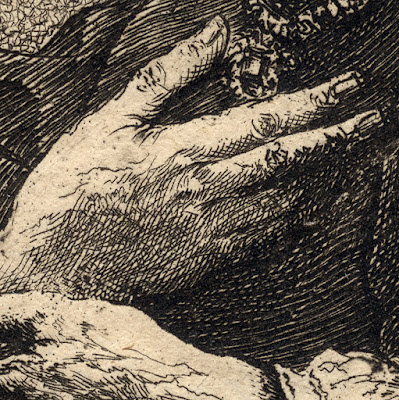 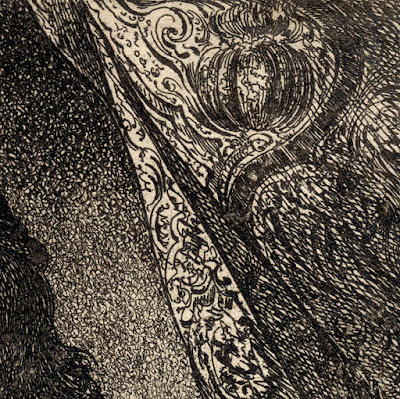 Posted by printsandprinciples at 06:19