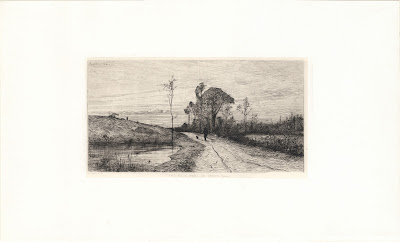 The British Museum offers the following description of this print:
“Plate 116: view along path beside pond in landscape, with figures walking dog.” http://www.britishmuseum.org/research/collection_online/collection_object_details.aspx?objectId=1344234&partId=1&people=134191&peoA=134191-2-60&page=1)

Condition: This is a rich impression of a rare print with full margins as published. The lettered details show signs of wear to the printing plate. The sheet is almost perfect, but there is a closed tear in the chine-collé at the upper edge which has been restored to being almost invisible by the whole sheet having been laid upon a conservator’s support sheet.

I am selling this spectacularly beautiful etching by Appian for the total cost of AU$182 (currently US$144.38/EUR122.69/GBP112.05 at the time of posting this listing) including postage and handling to anywhere in the world.

If you are interested in purchasing this sublime etching by one of the major French printmakers linked to the Barbizon School, please contact me (oz_jim@printsandprinciples.com) and I will send you a PayPal invoice to make the payment easy. 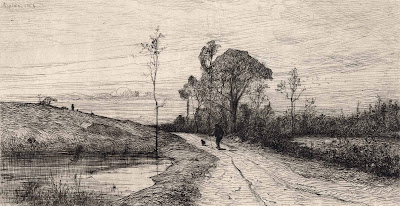 This is one of Appian’s major prints and for this reason it is showcased in Michel Melot’s (1996) marvellous book, “The Impressionist Print” (p. 79), with a heavily inked version of the same print—what the French describe as “saucée” (gravied)—from an earlier state.

There are several reasons for its importance and they are not all to do with the wonderful sense of space and ease of execution that Appian was able to instil in this tightly organised composition.

As a way of explaining one aspect of its importance, my eye is drawn to the special way that Appian uses the white of the paper to describe his vision of the subject—what the British Museum describes as a “view along path beside pond in landscape, with figures walking dog”)—but this vision of landscape is not exactly about physical reality. Instead, I read the image as being about the luminous and somewhat unearthly light pervading the scene; an effect that is even more notable in the earlier saucée state. In short, what makes this print interesting in a grand timeline extending from the Barbizon School to Impressionism is that it exemplifies a change of interest from rendering objective reality to expressing experiential reality of the intangible; or to express this slightly differently: a change from portraying a subject as if it were a physical solid to portraying it as an experience of sensory effects.

Melot’s (1996) explains Appian’s interest in these “sensory effects” with the insightful comment:
“… his work definitely tends to highlight the non-material elements of the landscape. The mountains are rendered by their shadow or by their reflection in the water rather than by their rock structure; scrub woodland is represented by its transparency rather than by its opacity; the sky is busier and more charged with movement than the land“ (ibid). 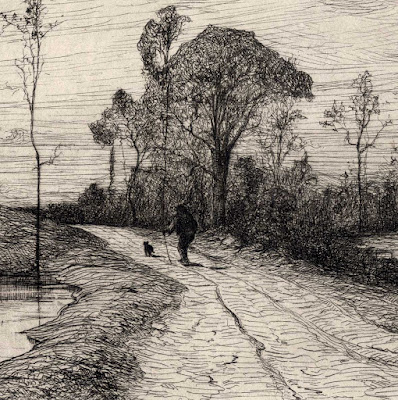 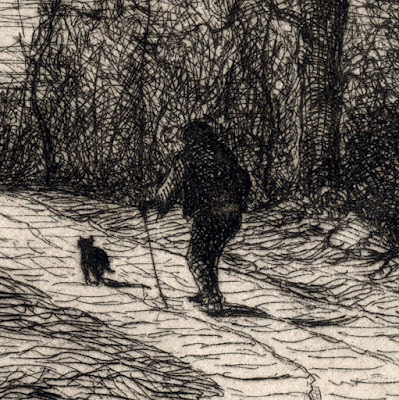 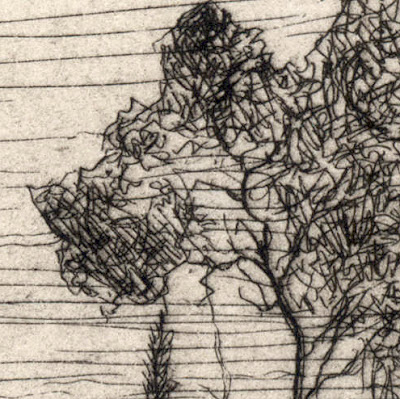 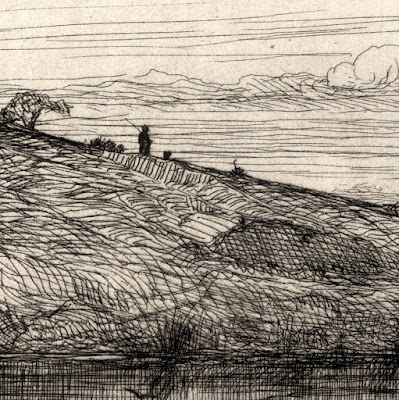 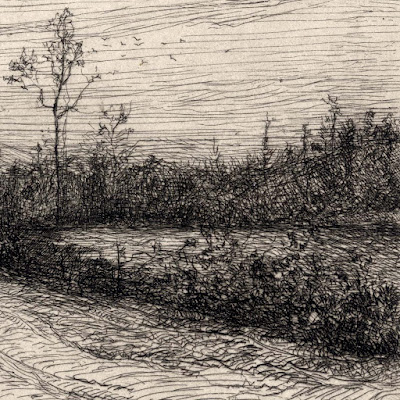