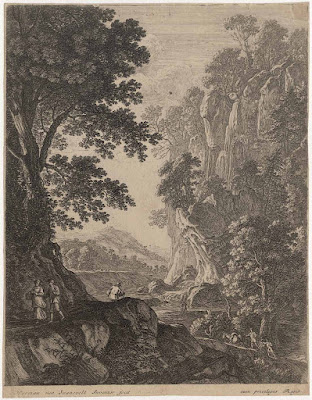 I am selling this original etching by Swanevelt for a total cost of AU$310 (currently US$226.60/EUR214.71/GBP183.61 at the time of this listing) including postage and handling to anywhere in the world.
If you are interested in purchasing this magnificent print, please contact me (oz_jim@printsandprinciples.com) and I will send you a PayPal invoice to make the payment easy. 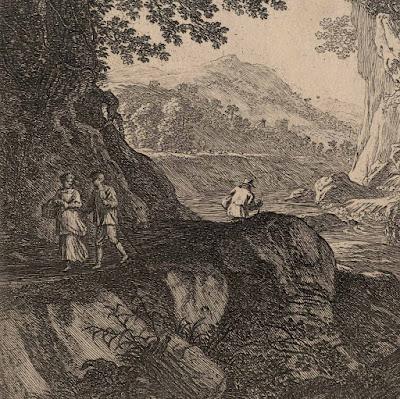 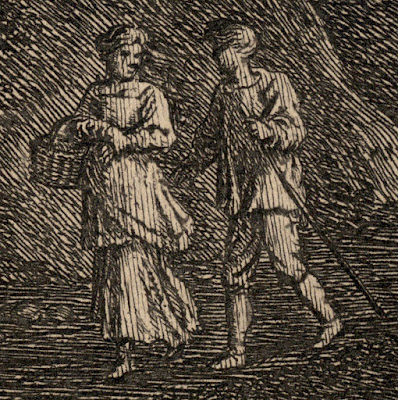 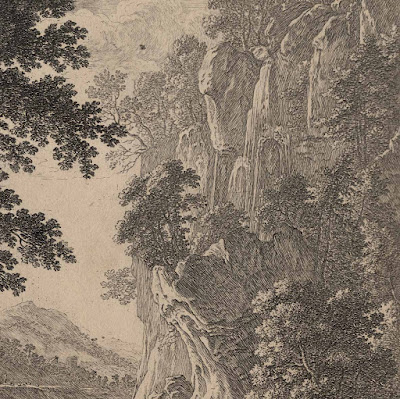 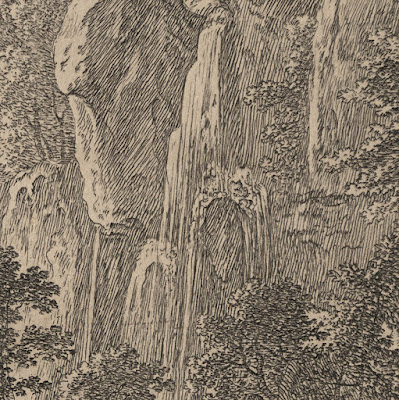 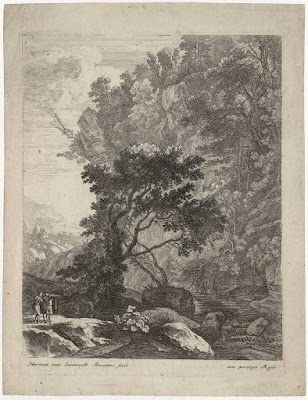 Condition: good impression with generous margins. The sheet has age toning, light folds, area of thinning and a closed tear at the lower edge, but is otherwise in good condition. 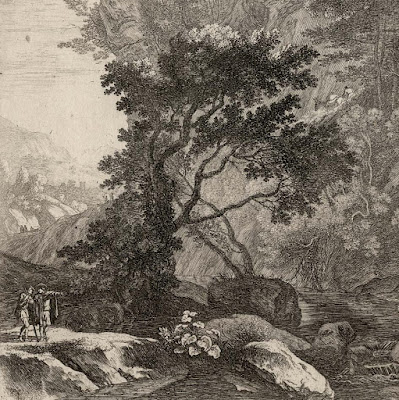 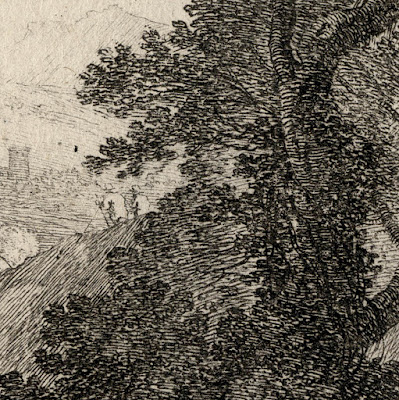 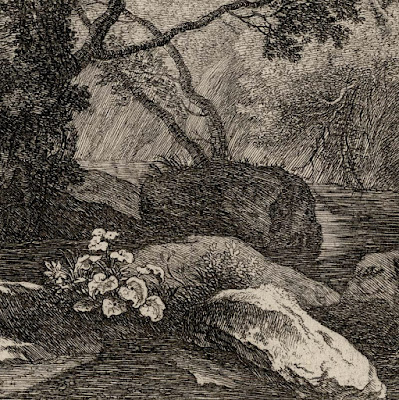 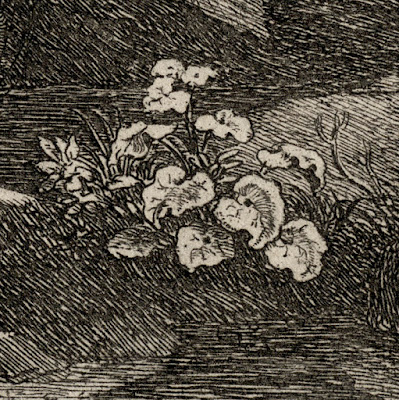 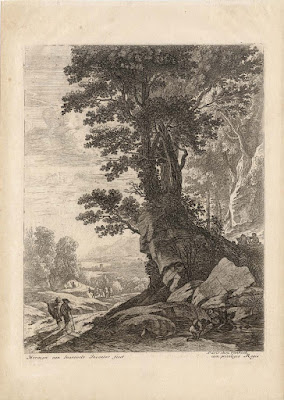 The British Museum offers the following description of this print:
“A group of trees; growing on a rocky mound at centre; two travellers in conversation as they pass each other on the country road at left; two male figures with a mule further along the same road in middle distance; in right foreground a male figure kneeling to drink from a stream; from a series of four landscapes.” (http://www.britishmuseum.org/research/collection_online/collection_object_details.aspx?objectId=1631153&partId=1&people=105987&peoA=105987-2-60&page=1)
Hollstein 102.ll; Bartsch ll.115 (318)

Condition: very good impression with generous margins in excellent condition (for its age). The sheet has light age-toning towards the edges and ink notes from a previous collector (verso) and remnants of mounting hinges. 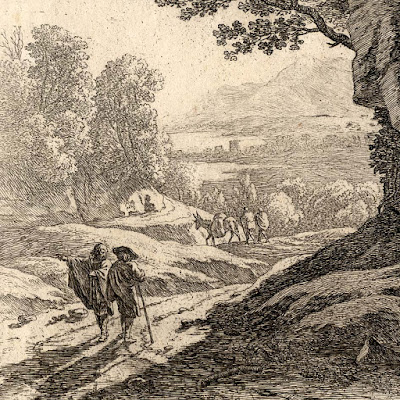 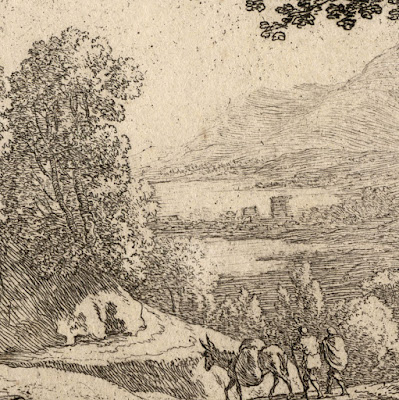 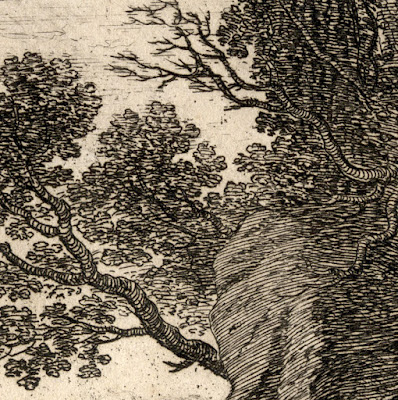 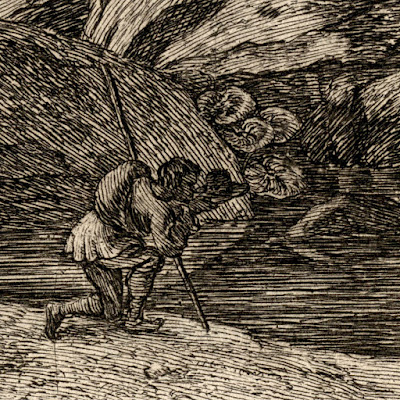 These vertical landscapes by Swanevelt are designed to be awe inspiring. I mean this in the sense that the scale of each landscape makes the portrayed folk going about their everyday business seem very small. Moreover, the elevated outlook offered in each scene invites viewers to contemplate the vastness of nature from a grand perspective—some writers might even describe the viewpoint as “God’s perspective.”

Swanevelt was far from being alone in his quest to capture the essence of landscape. Indeed, one of his close associates at the time is the legendary Claude Lorrain (born Claude Gellée) (1604/5?–82). There is a considerable difference, however, between Swanevelt’s and Lorrain’s approaches to portraying landscape. Both shared the conception of landscape as an idyllic place populated with classical personages, but the fundamental differences are all about how the portrayed landscapes are structured and illuminated.

Swanevelt structured his landscape as if he were a set designer for the stage. Each pictorial element—tree, rocky outcrop, twist in a river, mountain—is treated like a stage flat in which the silhouette edge of the various landscape features mark distinct spatial zones. By contrast, Lorrain’s landscapes are far more pictorially homogenised in the sense of being structured with greater ease in the transition from one spatial zone to the next.

In terms of how light is used, Swanevelt leans strongly towards raked lighting (i.e. an extreme angle of side lighting). This approach presents trees and rocks as if illuminated at early morning or late evening where forms appear solid and almost impenetrably opaque. By contrast, Lorrain employs a broader and more general lighting and when he does use strong light, the light seems to penetrate through forms.

(I apologise for generalising about Swanevelt and Lorrain but I find that speaking broadly is helpful to “get to the heart” of an issue.)

Posted by printsandprinciples at 05:38