Martin Rota’s engraving, “Christ as the Man of Sorrows” 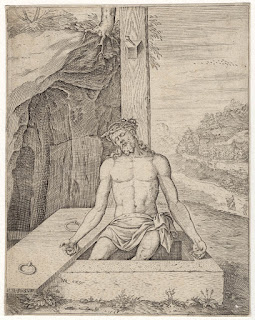 Engraving on fine laid paper, trimmed at the platemark, marked with the monogram of the publisher “NN” (Nicola Nelli), dated on the plate at centre of lower edge, “1568”, and lettered on the side of the sarcophagus cover (partly decipherable) with the acronym: “M · R · S · F” (Martin Rota Sebenicensis Fecit)
Size: (sheet) 17.1 x 13.4 cm

Condition: this is a print of the utmost rarity (it may even be a unique copy) with a few very small abrasions otherwise in excellent condition. The sheet is trimmed to the platemark and there is a pint hole towards the lower right corner. There are ink and pencil inscriptions (verso) along with a collector’s stamp “FA.”

I am selling this small masterpiece for a total cost of AU$460 (currently US$347/EUR324.81/GBP276.78 at the time of this listing) including postage and handling to anywhere in the world.
If you are interested in purchasing very rare, museum quality print, please contact me (oz_jim@printsandprinciples.com) and I will send you a PayPal invoice to make the payment easy. 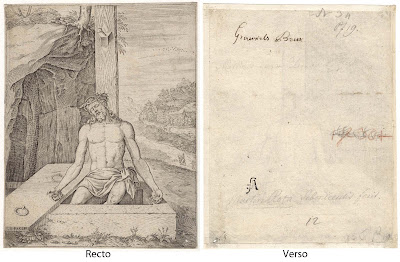 This simple but very beautiful engraving has almost been the death of me over the last three days. As an act of sharing my woes and unburdening my angst onto others, I’ve decided to give an account of my adventures.

My journey of discovery began when I decided to separate the sheet from the backing board onto which it was glued. I needed to do this operation as I could see glimpses of inscriptions on the back of the sheet that looked interesting and, more important, the glue used for attaching the sheet to the backing board had stained its way through to the front of the sheet marring the image. For this operation, I simply laid the print and its backing board in a bath of water (with no chemical additives) for an evening dip. In the morning I was relieved to find that the print was floating above the backing board and the glue (whatever it was) had dissolved away completely and even the stain on the front of the image had miraculously disappeared. Marvellous.

After drying the print, I examined its back. At the very top of the sheet (verso) I saw pencils numbers that I assumed were a collector’s catalogue references and below them, an ink inscription written in an old but dreadful hand that I assumed to be a previous collector’s name: “Grauwels Bruse”. Further down, I saw an ink-stamped monogram of entwined initials, “FA”, no doubt another past collector, but my interest didn’t lead me to try to identify who this might be. Instead my eyes were fixated on the pencil inscription: “Martin Rota Sibenicensis fecit.” This name seemed to verify that the print was by Rota as I had purchased it from a dealer as a genuine Rota. Alas, this is the beginning of my woes.

I consulted the Bartsch catalogue raisonné for Rota (1979, Vol. 33) never expecting even for a moment that I would have difficulty in finding the print with its title and Bartsch number. I was in shock, however, as it wasn’t there. I then checked on the British Museum’s holdings of Rota prints and they didn’t have it either. I then checked everywhere and no museum had this print. I was VERY uneasy!

Next, came the painful process of verifying that this print was a genuine Rota despite the fact that it wasn’t listed ANYWHERE. And so began the painstaking process of comparison of small details in this print with verified—Bartsch approved—prints by Rota. At this point, I can say with deep satisfaction that I now know more than I did before about the way that Rota renders woodgrain on crosses. Moreover, from endless comparisons with other artists’ versions of “Christ as the Man of Sorrows” executed in much the same time period, I now know that very few artists portray Christ with a well-toned six-pack as depicted by Rota in his prints. For example, Israhel van Meckenem (c.1445–1503) in his “Gregorian Man of Sorrows” (Bartsch 9[6].135[251]) shows Christ with a stretched and sunken abdomen appropriate for a man who has just been crucified.

The final stage in my research should really have been the first stage: to study the inscriptions on the print itself. Up to this stage I had ignored the lettered “NN exc” inscribed on the side of the tomb as I had assumed that it simply signified the publisher name, Nicola Nelli, and had little bearing on the name of the engraver. Of course I was wrong. After consulting the list of 16th century publishers in “Prints after Giulio Clovio” (1998, see p. 133) I discovered that Nelli SPECIALISED in publishing Rota’s prints (among other artists). What also surprised me is that Nelli executed prints in the style of Rota but “the drawing is inferior to Rota’s” (ibid).

When I read this remark, depression hit me in the sense that I then assumed that Nelli not only published the print but also engraved it. The other featured letters shown on side of the tomb’s cover, “M · R · S · F”, I had no idea what they could mean. That is, until the thought occurred to me that that they were the first letters of Rota’s name, an acronym for “Martin Rota Sebenicensis”  and the final “F” signifying the all-important piece of information: Fecit” (i.e. the print was executed by Rota). 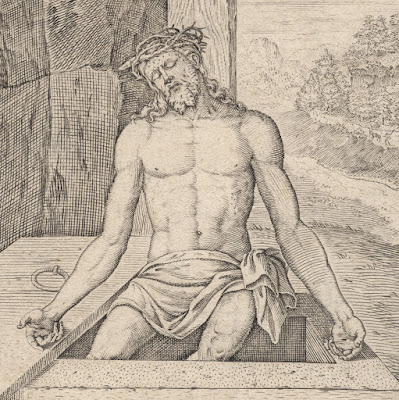 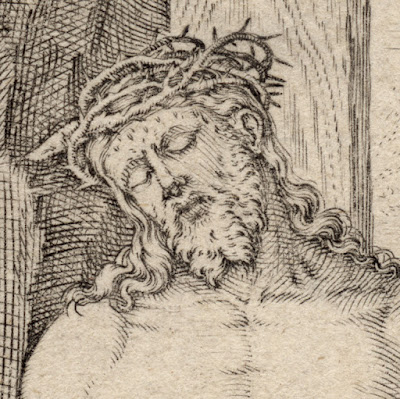 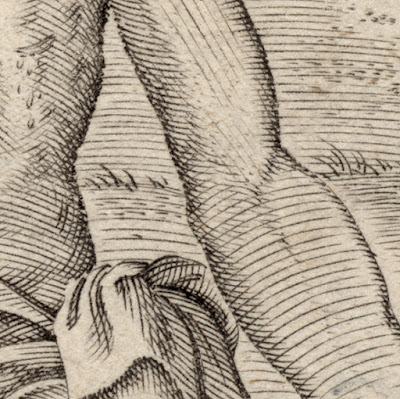 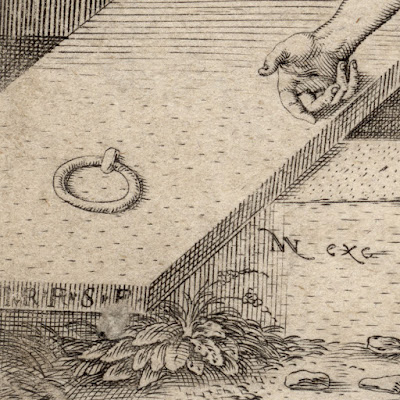 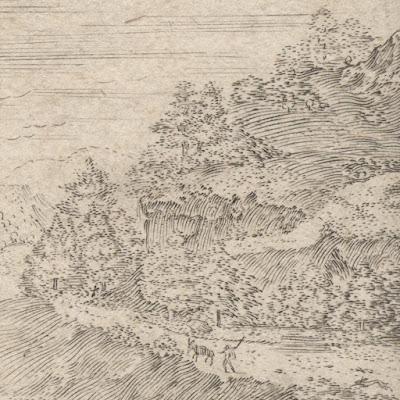