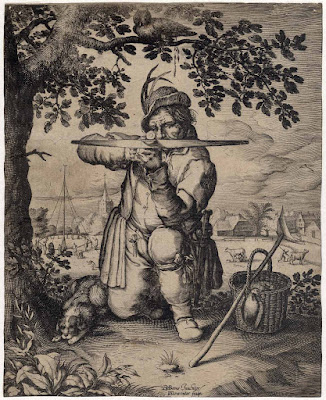 The British Museum offers the following description of this print in its fourth state with two lines of English verses (this impression is from an earlier state before these lines of verse were inscribed):
“The Crossbowman; landscape with the archer kneeling at centre, in frontal view and aiming his crossbow at the viewer, a dog at left, a basket with dead birds at right, several archers shooting a popinjay in left background; fourth state with English inscription; after David Vinckboons.” (http://www.britishmuseum.org/research/collection_online/collection_object_details.aspx?objectId=3099537&partId=1&people=107773&peoA=107773-2-60&page=1)
Note: the BM also has a drawing by an anonymous artist after this print (see: http://www.britishmuseum.org/research/collection_online/collection_object_details.aspx?objectId=692325&partId=1&searchText=1899,0120.83.&page=1)

The Rijksmuseum offers the following description of this print which may be from the same earlier state than the impression held by the BM:
“A kneeling man pointing his crossbow accurately. Next to him is a basket of shot birds, on the other side lies a dog. Sitting on a tree branch above him an owl that poops hunter on his head. In the background, an archer tournament, which will be shot with crossbows on a bird on a pole.” (http://hdl.handle.net/10934/RM0001.COLLECT.175152)

Condition: richly inked impression but unevenly printed at the top edge. The sheet is lightly age-toned and with small tears (repaired), flattened horizontal folds (visible verso but not recto) and a few pin holes.

I am selling this remarkable old master print from the Renaissance era for a total cost of AU$550 (currently US$415.07/EUR389.90/GBP331.26 at the time of this listing) including postage and handling to anywhere in the world.
If you are interested in purchasing this lethally charged print, please contact me (oz_jim@printsandprinciples.com) and I will send you a PayPal invoice to make the payment easy.
This print has been sold 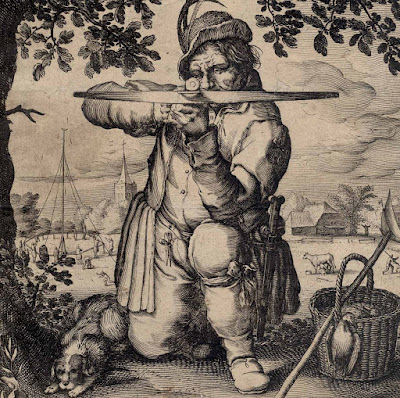 This image of a peasant aiming his crossbow at the viewer is a perfect example of an image that engages with its audience by inviting a reflexive/instinctive response AND in encouraging reflective/contemplative thoughts.

In terms of my own engagement with this image, my eyes are instinctively drawn as an involuntary response—a bit like being hit on the knee with a hammer and finding that one’s leg kicks involuntarily—to the arrow (technically a bolt or quarrel) pointed at me. The threat, even if it is only a printed image of a threat, seems real and I have to consciously arrest my attention from staring at the source of my feeling of alarm. (For those unfamiliar with the head of a bolt, it is not tapered to a sharp point like an arrow but is flat as shown here.) After I successfully disengage my involuntary response of alarm, I can then take in the rest of the portrayed scene and, a bit like Sherlock Holmes, piece together a contextual narrative for why this figure is about to shoot me.

Regarding the reflective mode that this image facilitates, note how the owl above the crossbowman adds a touch of schadenfreude (shameful humour) to the scene by giving the threatening bowman droppings of appropriate justice for what he is doing. 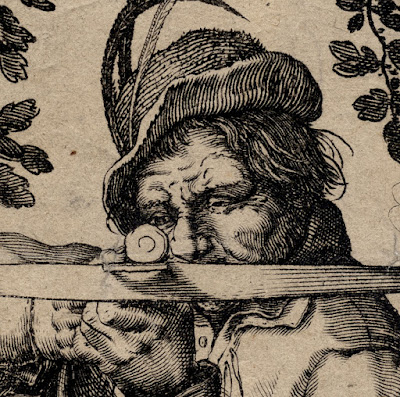 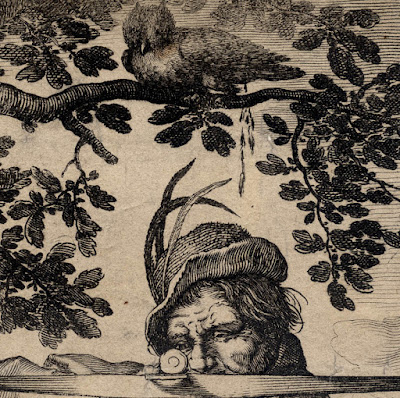 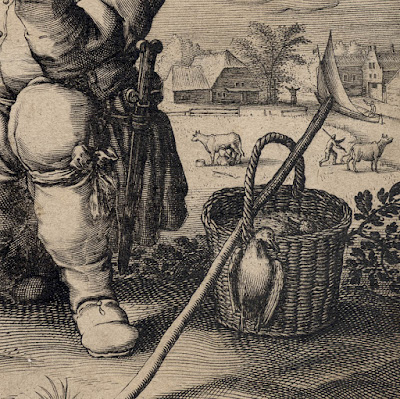 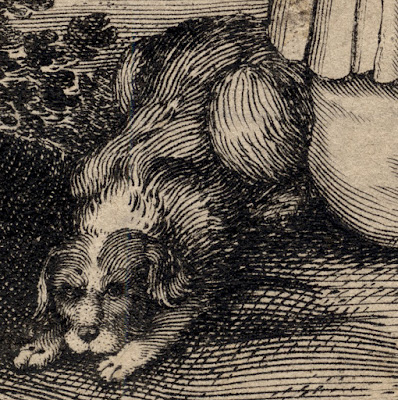 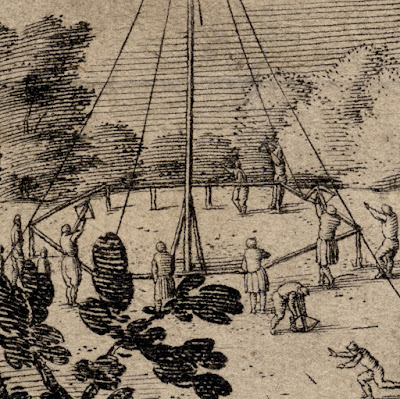 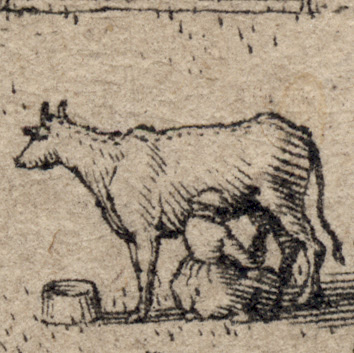