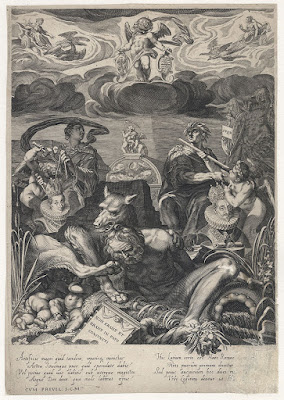 Etching and engraving on laid paper, trimmed along/close to the platemark with restored loss to the lower right corner and backed with a support sheet.
Size: (sheet) 35.7 x 24.5 cm; (plate) 35.7 x 24.2 cm; (image borderline) 30.9x 24 cm
Inscribed in Latin on the tablet within the image borderline at lower left: “NON ERANT ET/ ERANT IN FATO/CONIVNCTI” ([transl.] AND WERE / ARE IN FATALLY / WE)
Lettered in Latin on plate below the image borderline: “Artificis magni quid …/ …/ .../ …// …/ …/ … (with loss of the text on the lower right including the final word, “DOMINI”); “CVM PRIVIL/ S.C.M.tis”
State i (of ii) Lifetime impression before the addition of the publisher’s details, “Marco Sadeler excudit”, of the second state.

The Rijksmuseum offers the following description of this print:
(transl.) “The portraits of Ferdinand II (r) and Eleonora Gonzaga (l) between emblematic figures. In the middle, the Roman wolf that nurses Romulus and Remus embraces the personification of the river Tiber. Above, on the clouds, a putto with the family arms of Ferdinand and Eleonora. In the left and right upper corner Mars and Venus on their floats. The print has a Latin caption.”
(http://hdl.handle.net/10934/RM0001.COLLECT.167868 )

See also The British Museum’s description of this print:
“Allegory of the marriage of Ferdinand II of Austria and Eleonor Gonzaga. A she-wolf suckling Romulus and Remus in foreground at left, a river god with a cornucopia in foreground at right, busts of the married couple being sculpted by two figures and two putti in the middle ground, a putto holding two coats of arms at top, chariots in top corners; first state before publisher's address”
(http://www.britishmuseum.org/research/collection_online/collection_object_details.aspx?objectId=3041209&partId=1&searchText=Aegidius+Sadeler&page=3)

Condition: richly inked and well-printed impression but with restored loss to the lower right corner in the text lines, backed on support sheet of archival (millennium quality) washi paper. The sheet is in excellent condition for its age but there are a few minor dot stains and a pin hole (restored).

I am selling this lmasterpiece of engraving (with etching) by one of the most famous of the old masters for AU$543 (currently US$397.54/EUR347.17/GBP311.86 at the time of this listing) including postage and handling to anywhere in the world (but not, of course, any import duties/taxes imposed by some countries).

If you are interested in acquiring this lifetime impression of a rare and historically important engraving crammed full of symbolism waiting to be deciphered, please contact me (oz_jim@printsandprinciples.com) and I will send you a PayPal invoice to make the payment easy. 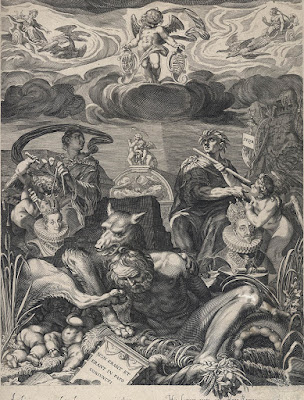 This is one of those images that is so full of symbolism that it is a treat to decipher.

Note for example the river god in the centre foreground personifying the Tiber emptying water from a curiously lobulated vessel to create the Tiber River (I’m uncertain if the staff lying beside him is an oar). Paralleling the flow of water symbolising the Tiber River is a beautifully rendered cornucopia that is a feat of engraving to be examined on its own. Perhaps even more interesting than the skill exhibited in depicting this spiralling organic horn is that it literally spills over the text lines. This little feature is a stunning example of early trompe-l'œil designed to engage the viewer's eye and interest.

Note also the subtle connections between each symbolic element. For instance the she-wolf feeding the children, Romulus and Remus (symbolising in mythology the founders of Rome), has her beautifully rendered paw clasping the river god, Tiber, as if to prevent him from collapsing from exertion—or whatever his ungainly lean signifies.

Beyond the symbolism there is another feature of this print that catches my attention: the angled division of tone to be seen left of centre in the sky. I have seen this device in other prints by Sadeler, and it may serve the purpose here to simply separate the two worlds of the wedded couple portrayed being literally carved by putti. From my standpoint, however, the treatment of the sky is like the faceting of a jewel in that Sadeler is adding a note of inner glow to the composition. 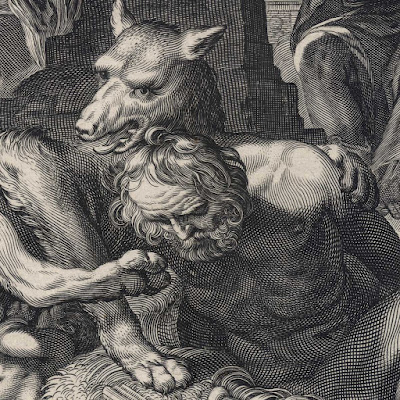 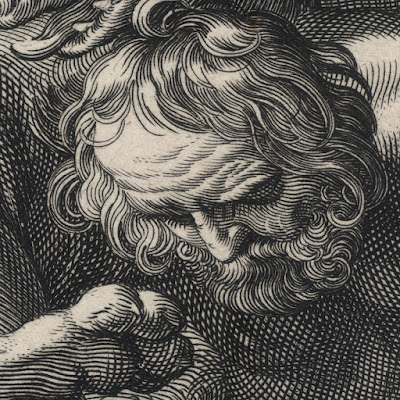 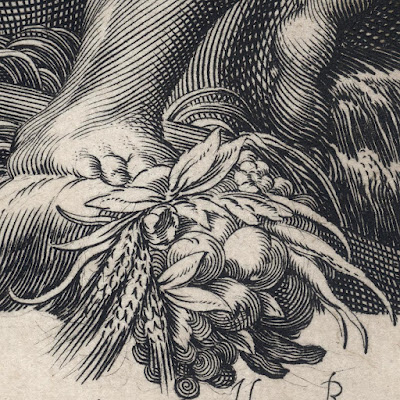 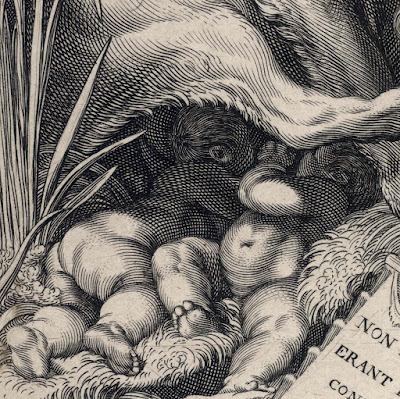 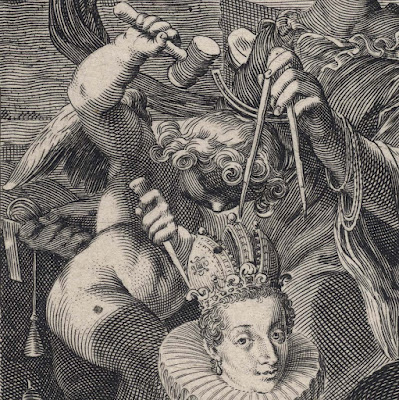 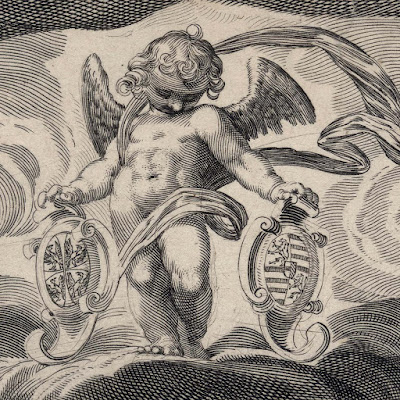 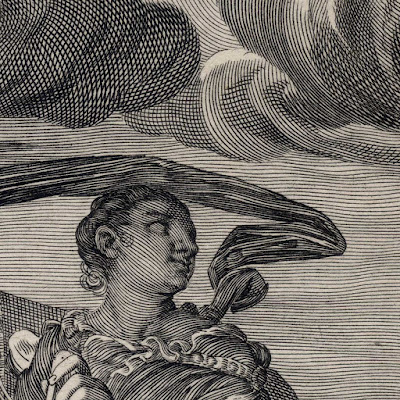