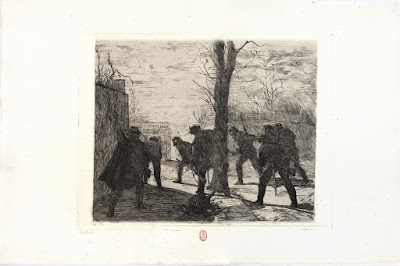 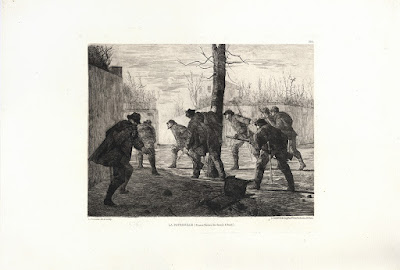 Etchings with plate tone on laid paper with margins (as published) and backed on a support sheet.

UPPER IMAGE:
Either a proof before the Cadart’s published state or (more likely) a state after publication (based on the difference to the plate size and traces of burnished image), signed in pencil (below the platemark at lower left) and stamped with an oval red ink cartouche (below the platemark at centre). (I have not been able to confirm whether this is the artist’s stamp or a collector’s stamp, but my reading of the text contained in the cartouche shows “1r. etat” [trans. “first state”].)
Size: (sheet) 32.6 x 49.4 cm; (plate) 23.8 x 31 cm; (image borderline) 22 x 27.1 cm

Condition: richly inked and well-printed impressions with generous margins and each backed with a support sheet of archival (millennium quality) washi paper. Both sheets are in excellent condition (i.e. there are no tears, holes, folds, abrasions, significant stains or foxing).

I am selling this pair of etchings showing different states of the same print, for the total cost of AU$240 (currently US$178.05/EUR153.61/GBP138.18 at the time of this listing) including postage and handling to anywhere in the world (but not, of course, any import duties/taxes imposed by some countries).

If you are interested in purchasing this pair of etchings, please contact me (oz_jim@printsandprinciples.com) and I will send you a PayPal invoice to make the payment easy. 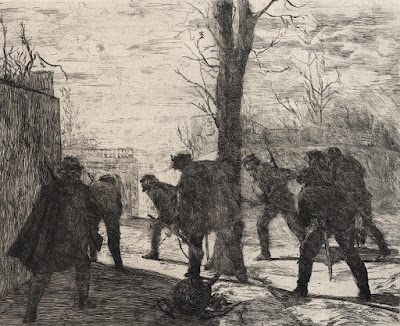 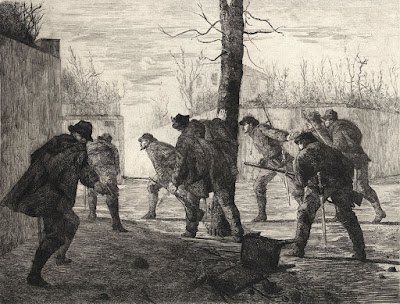 Forgive me if my description of this scene is terribly flawed, but I believe that what is portrayed is an event during the Franco-Prussian war (1870–71) when maverick riflemen from the villages of Les Ternes, acting under the banner of the French National Guard, sought to defend France from German domination.

The reason that I am sharing this print, however, has little to do with the significance of the portrayed scene. Instead, what fascinates me is the artist’s adjustments to what is shown from the published state impression lettered with the title of the print to the later state impression where the size of the platemark show the printing plate has reduced in size.

Note, for instance, that the chair in the foreground changes from a square seat in the published state to a round one in the later print. Note also the changes to the foliage in the distance separating each print and even how the figure on the far left is altered so that he no longer turns his head towards the viewer and banishes a pistol but carries a rifle as he struts away from the viewer.

From a personal standpoint, I see the alterations to the composition as adding a dimension of mystery and intrigue to the scene. To my eyes, the slightly fuzzy rendering of details in the later state gives me scope to “feel” intuitively the tension of the moment depicted. By contrast, the focal clarity of the published state, tends to freeze-frame the portrayed scene to a split second of objective reality that does not give me the same latitude for a personal response. 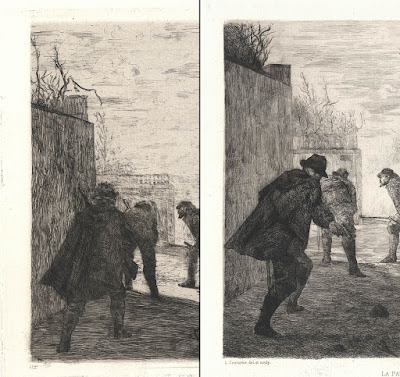 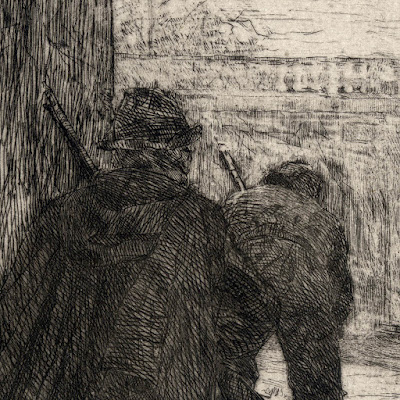 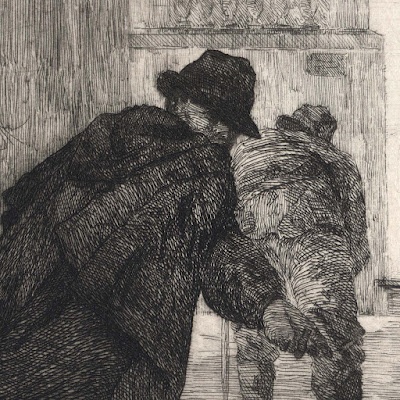 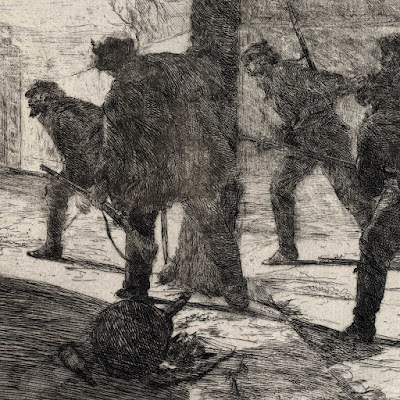 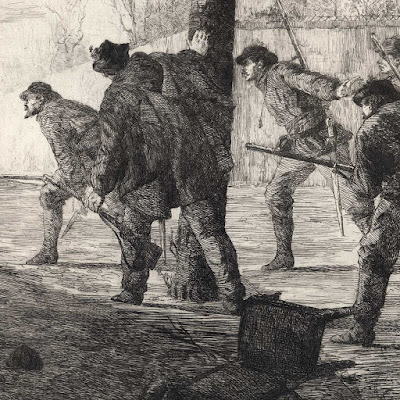 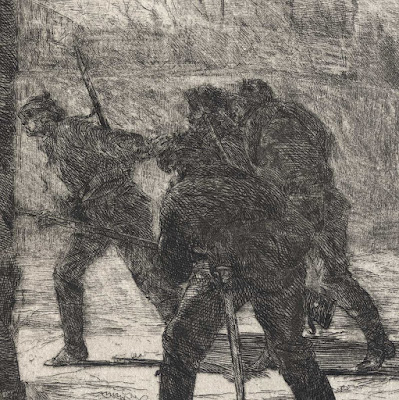 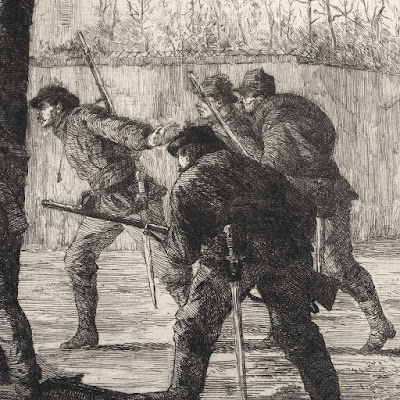 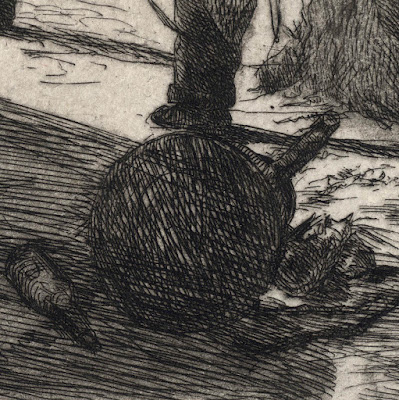 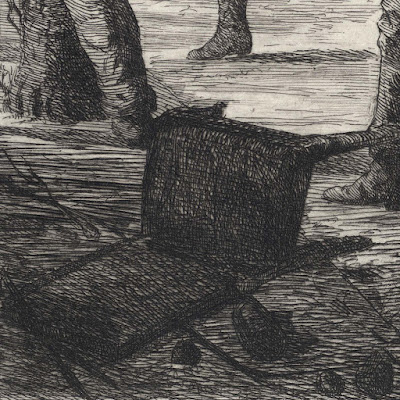 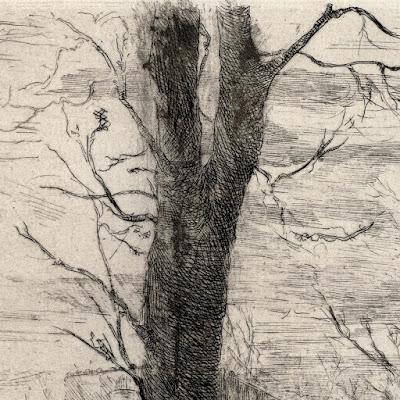 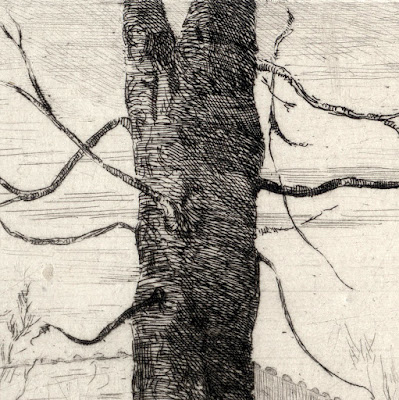 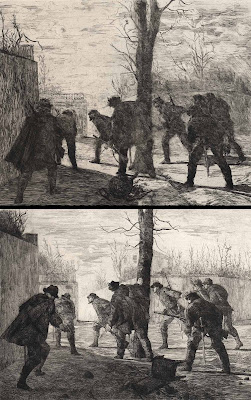 Posted by printsandprinciples at 05:57