Charles Émile Jacque’s etching, “Herd of pigs coming out of a wood”, 1849 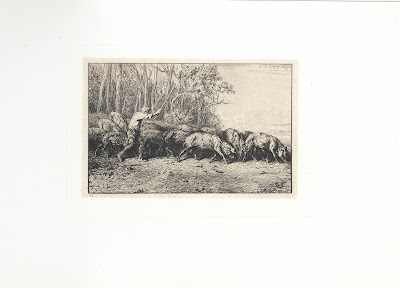 State iv (of v?) Note: Guiffrey (1866) describes three states of this print (viz. first state executed solely in etching; second state showing contours enhanced with engraving; third state with the headland fully described and with horizontal lines in sky). Guiffrey does not describe this numbered state or the later state impression held by the BM where the number is “burnished off but still partly visible” (BM no. 1889,0608.117). Consequently I have described this state as the fourth state.

J-J Guiffrey (1866) offers the following description of this print in his catalogue raisonné for Jacque, “L'Oeuvre de Charles Jacque”:
(transl.) “Herd of pigs coming out of a wood driven by a young villager who, with a raised stick directs their progress … . Behind them you can see the top of an embankment.” (p. 63).

See also the description of the print at the British Museum: http://www.britishmuseum.org/research/collection_online/collection_object_details.aspx?objectId=3501114&partId=1&searchText=1851,0802.86&page=1

Condition: richly inked and faultless impression in pristine condition (i.e. there are no tears, holes, folds, stains, abrasions, foxing or signs of handling). This print is in a superb/museum-quality condition. The sheet is backed on a support sheet of archival (millennium quality) washi paper.

I am selling this beautifully preserved etching by one of the luminaries of the Barbizon School for [deleted] including postage and handling to anywhere in the world (but not, of course, any import duties/taxes imposed by some countries).

If you are interested in purchasing this superb impression of a very beautiful etching embodying the spirit and interests of Barbizon School of artists, please contact me (oz_jim@printsandprinciples.com) and I will send you a PayPal invoice to make the payment easy.
This print has been sold 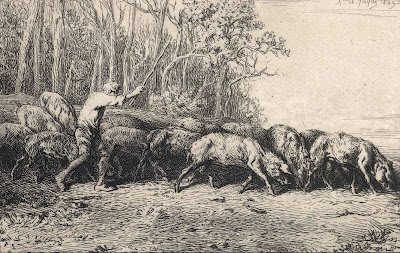 To my eyes this is is an amazing print. In terms of being historically significant, it certainly showcases the interests of Barbizon School of artists in celebrating “honest” rural labour before industrialisation changed everything. For instance, the herdsman’s only tool of trade is a roughly hewn stick with which he drives his grunting pack of pigs on their way. More interesting for me, however, is the artist’s rendering of the scene that has the hallmarks of a true master.

Note, for instance, how the background trees are not first inscribed with an outline and then “filled in” with superficial details. Instead the forms of the trees are lightly described by the dark tone of their immediate surroundings allowing the trees to be pictorially integrated with their surroundings.

Perhaps more revealing is Jacque’s mastery in capturing the surge of pigs moving quickly away from the herdsman with his raised stick and slowing down when sufficiently far enough away from him to explore the earth with their noes. To express this notion of a surge leading to a slow flow, Jacque employs a stylistic change from initially using longer parallel strokes describing the pigs near the herdsman shifting to shorter strokes describing the muscled contours of the pigs further away. 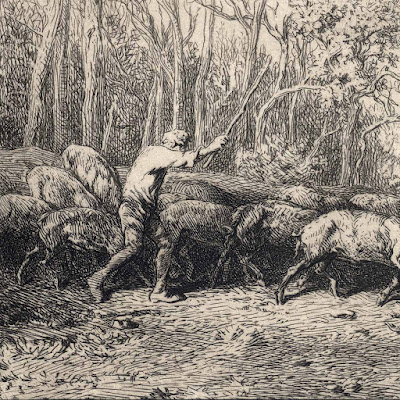 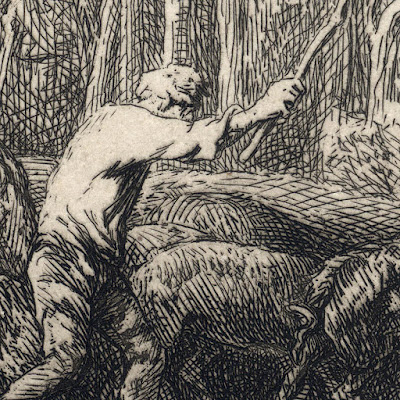 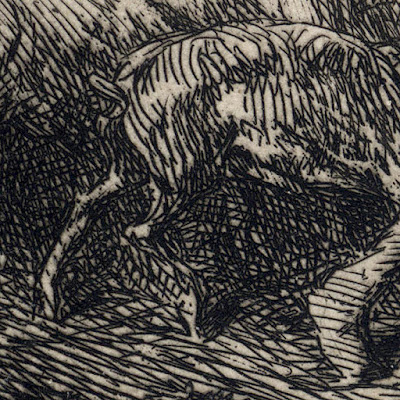 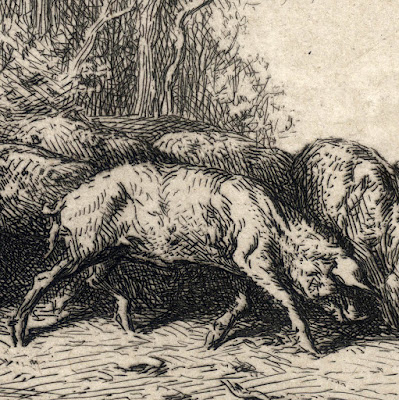 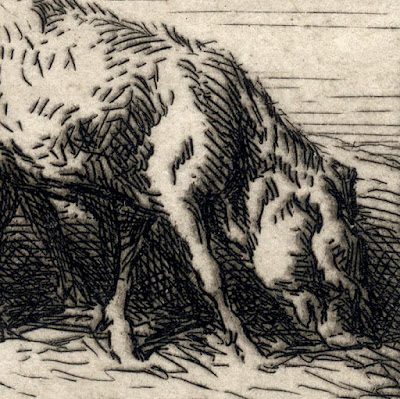 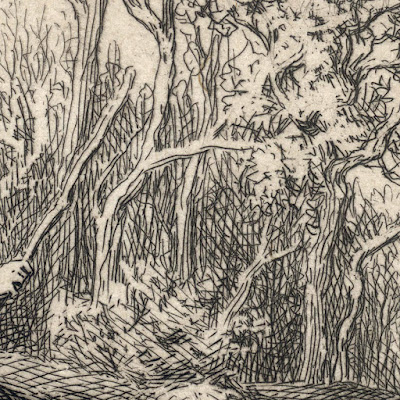 Posted by printsandprinciples at 07:03